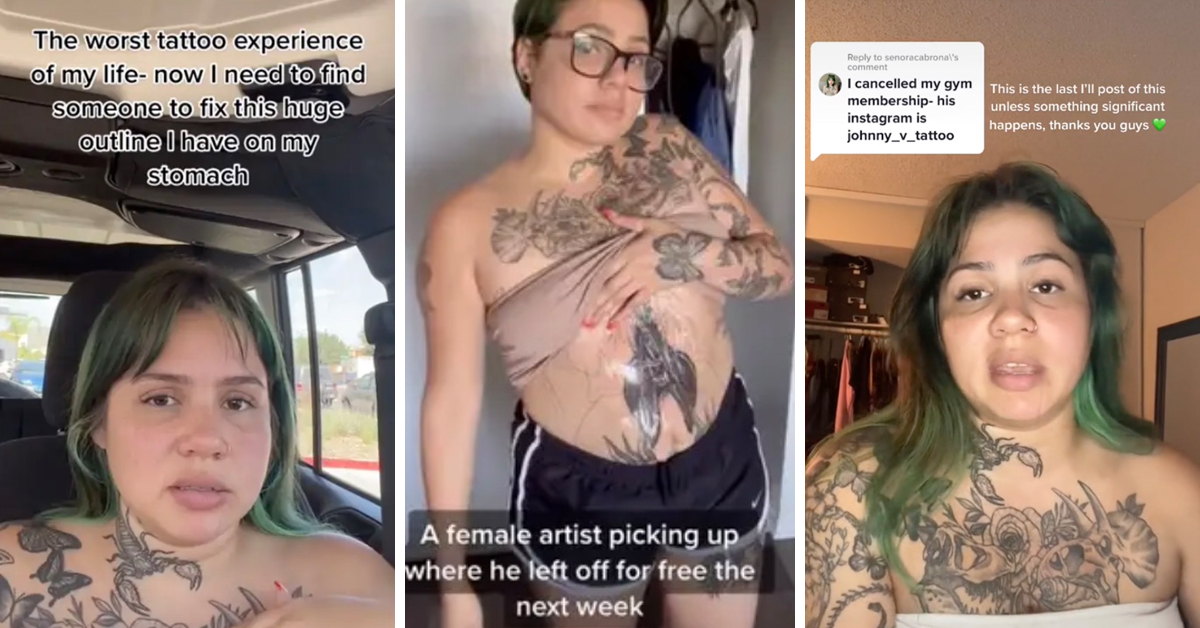 Tattoos are a deeply personal thing. And that’s not just because of what they mean to a person. It’s also that they are located on, well, your body.

So you kinda expect a level of professionalism or at least non-judgment from your tattoo artist.

Unfortunately, that’s not always the case.

Dalina recently shared a tattoo experience on TikTok, which quickly went viral. And not for a good reason.

She says she left in the middle of the tattoo process and had a panic attack in her car. Why? Because the artist shamed her body.

Here’s what Dalina said in the video:

“I need to know if I’m being dramatic or not. I just left in the middle of getting my tattoo. Like, in the middle of my appointment, I got up and I paid him and I left. I met this guy at the gym and he approached me specifically because of my tattoos.

He was like, ‘Oh, I do tattoos’ and he gave me his card and we exchanged information and I looked him up and I liked his work and I had a tattoo that I wanted to get all over my stomach.”

“So, naturally, I come to the thing (tattoo shop) and he has me take off my shirt. I have my pasties on, so I’m literally there without a shirt and literally, just my nipples are covered.

And he just starts talking about how unsymmetrical I was. He starts calling my boobs ‘tits.’ But, the last straw: I turn around, and he goes, ‘Ah, I get why I see you in the gym all the time. You got back rolls.’ Am I crazy?”

The comments were quickly awash with support and fury. Several women shared that “this is exactly why I only go to female artists” while men noted that the experience was “completely unacceptable”.

BuzzFeed reached out to Dalina and she told them the story of how she connected with the tattoo artist.

“I just moved to California from North Carolina and was looking for stability and a new schedule, so I started a new gym right away. He complimented my tattoos and chatted with me about my ink and how he was a tattoo artist and gave me his card. I thought he was being kind. He seemed genuine. Every time afterward he would wave at me or approach me saying things like ‘putting that work in I see’ or even fist bumping me with a ‘good job’ in the middle of my workouts.”

She said she was excited to get the tattoo. “Tattoos make me feel more like myself. The more work I get done, the happier I am. And since I’m new to the area, I thought I was going to have a new, regular artist. I even bragged to my husband and was ready to schedule him an appointment afterward.”

Because she knew she wanted to have her stomach and sternum inked, she planned on removing her shirt and wore pasties over her nipples.

“He started putting together the stencil and told me, ‘Just take off your shirt.’ Once my shirt was off, things got weird quickly. I stood there for about 20–30 minutes shirtless before he even got started placing the stencil on my skin. He started referring to my boobs as tits, mentioning plastic surgeons that he knew people went to.”

And then, as Dalina noted in her video, he began to call her “unsymmetrical” and commented on her “back rolls”.

“I was honestly in shock hearing the comments. He could tell my mood changed almost immediately because he asked and when I said, ‘To be honest with you, what you’ve said was extremely offensive,’ he looked at me like I was crazy. Like, he was shocked I even said something at all. He brushed me off and told me not to take life too seriously.”

At that point, she decided to leave.

“He didn’t tell me I had to stay and get tattooed, but he became visibly annoyed. I told myself to suck it up and get it over with. I didn’t want to start any trouble. But when he started my outline, he was being so rough when wiping away excessive ink. I felt like he was intentionally trying to make me feel smaller. That’s when it clicked that I had to go.”

“I felt like I had to pay him because I realized that I was in a room alone with just this bigger man who was rude and had no problem disrespecting me — who’s to say he wouldn’t have become physical if I refused to pay? Men are notorious for hurting women for less. I paid him $200 in total and just ran out after. At the time, it felt like a small fee for my safety,” Dalina said.

“I felt like I had to pay him because I realized that I was in a room alone with just this bigger man who was rude and had no problem disrespecting me — who’s to say he wouldn’t have become physical if I refused to pay? Men are notorious for hurting women for less. I paid him $200 in total and just ran out after. At the time, it felt like a small fee for my safety,” Dalina said.

Thanks to TikTok, Dalina found a female tattoo artist who is finishing her tattoo… for free!

“Nobody has the right to disrespect you. You don’t need to excuse people’s bad behavior, but most importantly, trust your gut and be aware of your surroundings. I was nervous about posting my experience because I felt almost dramatic, like I was in the wrong for leaving. Then I realized I wasn’t.”

“I was scared to post his name because he’s in my local area, but after individuals online asked me to identify him to know who to stay away from, I realized how many times he’s done this to other women. Sometimes, it just takes one of us to hold someone accountable. I wasn’t offended that he was making negative remarks about my body, I was upset he felt he had the right to. I’m happy I left and I’m happy the internet came together in a positive manner,” she concluded.