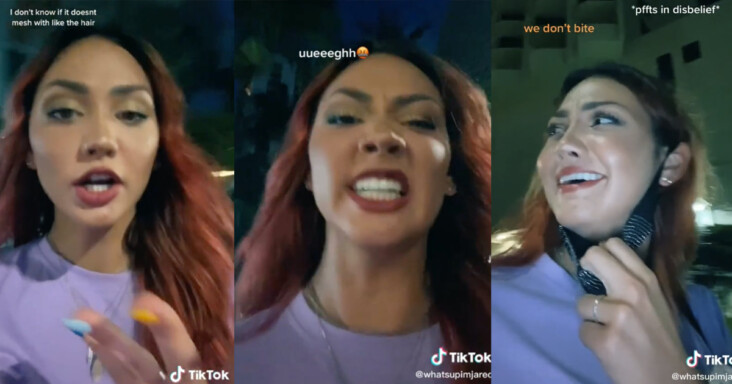 Lauren Bachman, a TikToker who goes by @whatsupimjared, has gone viral for reacting to a man catcalling her while she was filming.

Bachman was walking along the beach while filming a TikTok about her outfit. A few men began to harass her during the filming.

She initially replied politely, saying just ‘hi’, but the men would not stop their harassment. So Bachman started barking at them.

Her viewers went wild for how Bachman dealt with the men and the situation. Her comments were soon lighting up with praise.

Another bemoaned the harassment women face constantly. “Like just whyyy. That makes me so uncomfy just let a girl walk in peace.”

Another decided, “That was a great response. I will be using that.”

It wasn’t long before Bachman had another incident of street harassment to share.

She uploaded a video of men catcalling her on the sidewalk and explained that a car full of men had slid up next to her during a walk.

This time, she got more aggressive.

She said she wasn’t afraid of the men and told them she would kill them if they tried anything.

Most viewers were supportive again, but a few chose this moment to whine about Bachman’s outfit, calling her “attention-seeking.”

Bachman did not take that well.

“I don’t care if you think I’m ‘attention seeking’ for wearing a crop top and shorts at the beach. … That does not give anyone the right to make me uncomfortable in that way,” Bachman said. “Why are you victim-blaming me? Why are you allowing the cycle to continue and telling those men that what they’re doing is not wrong?”

Another viewer asked Bachman why she said hi to the men if she was not interested in them.

Bachman pointed out that men get increasingly frightening if she ignores them, so saying hi and moving on makes the most sense.

“You saw in my video that after I ignored them, then they threatened me,” Bachman said. “I try to do something to not be threatened. … I say ‘hi’ back, and I keep walking. … This was not an invitation to talk to me.”

“You do not need to explain yourself. You deserve to feel safe. So sorry,” a viewer reminded Bachman after she answered some critique.