It’s no secret that being a woman or non-binary person, or pretty much anyone but a cis man who presents as straight, can make certain things feel more dangerous.

Some women feel there is a vulnerability to having a body that is policed, and while people who aren’t straight cis men make up much of the world, they’re the groups that receive the most harassment in public, especially if they buck gender norms or express themselves outside conservative boundaries.

This vulnerability is maybe not understood by those men, at least the ones just going about their lives not trying to bother anybody.

It’s easy to be unaware of stuff that doesn’t affect you personally; that doesn’t mean it’s okay to remain unaware. That’s why conversations like the one posted by Twitter user @wxixp are useful. They shared a series of screenshots from the comment section of a TikTok, captioning it, “Saw a Tiktok that said, what would you do if there were no men on earth for 24 hours… here was the comment section.”

They added one of those sad eye emojis at the end, probably because the replies are so “sad eye emoji”. All the stuff people wanted to do was so sweet and simple and yet as a lady, I get why many of them feel out of reach. 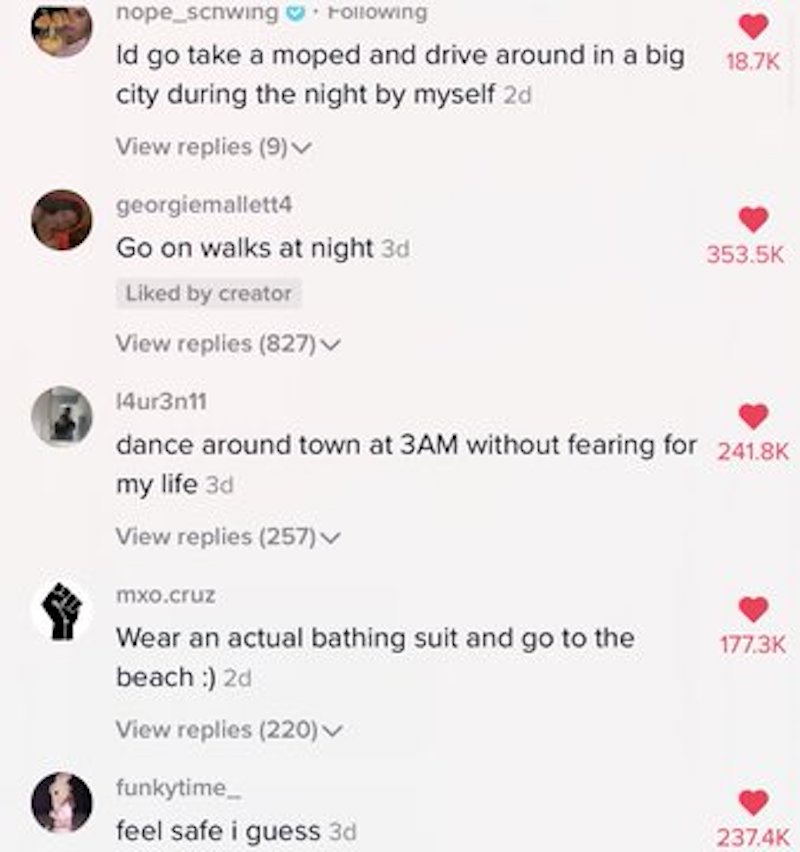 “Wear whatever I want outside without being scared.” 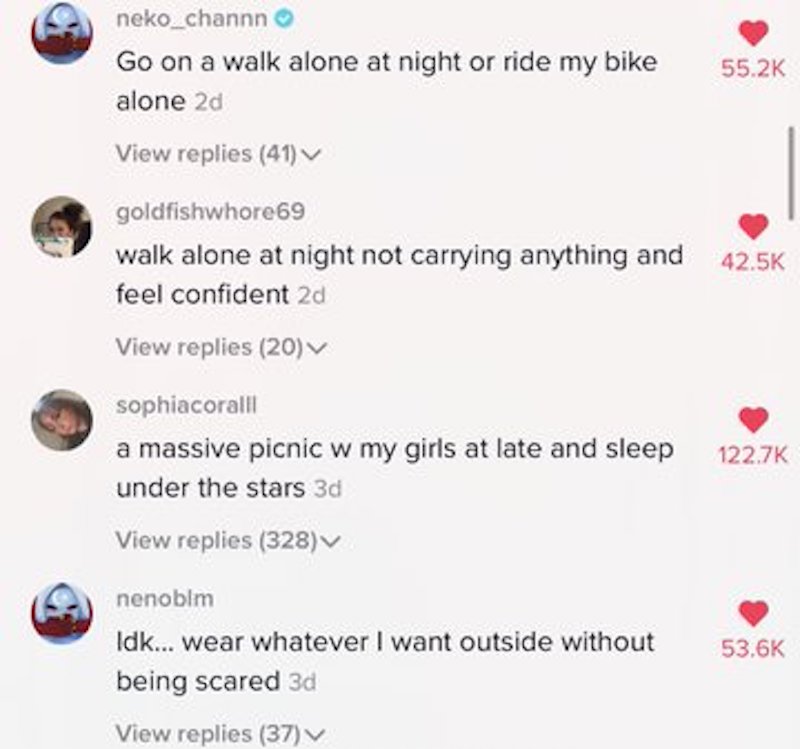 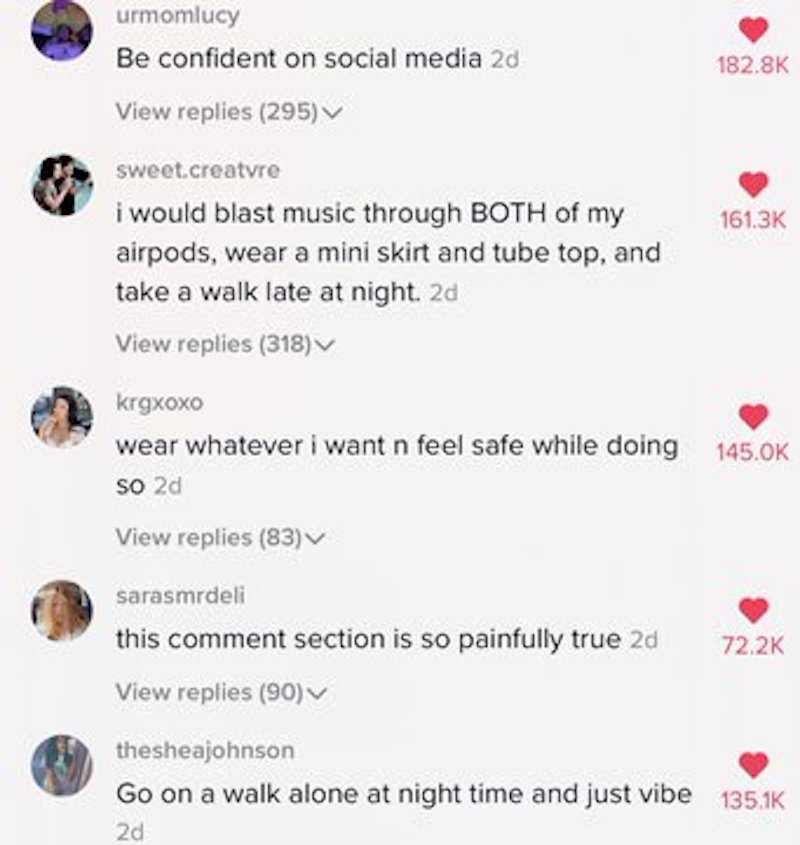 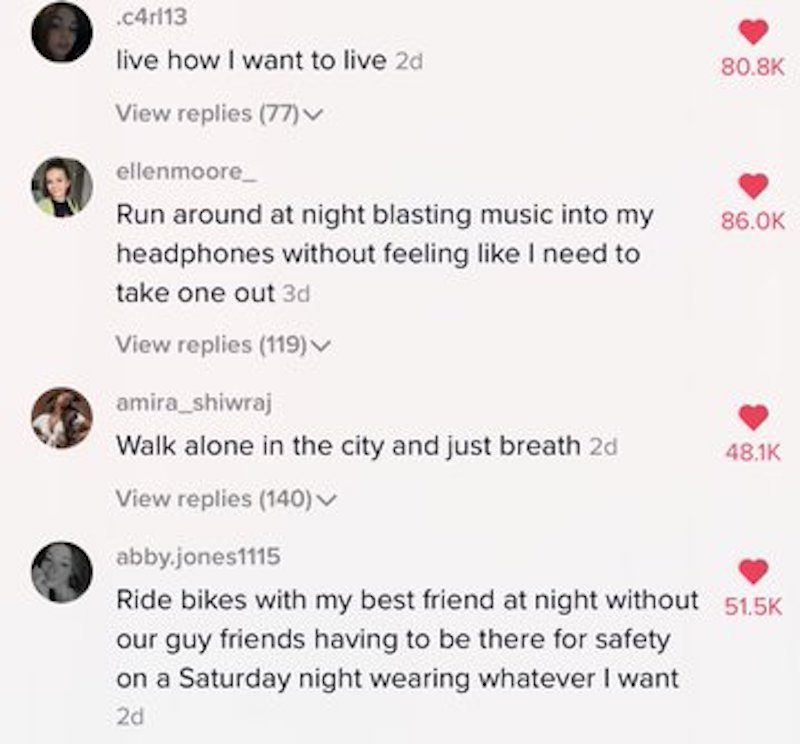 The replies to the tweet are full of other people’s personal dreams of what it would be like to have no dudes in the world for just one 24-hour break:

Without reading the screenshots that’s what I said. Take a walk at like 2/3am all bundled up in a sweater, enjoying the peace and quiet and chilly night air. Sounds like bliss

I want to travel alone but it’s too dangerous

Just topless would be enough for me honestly. Just to feel what it feels like.

Leave my drinks alone at a counter

Not to mention walking as far as possible from large parked vehicles, checking under the car before getting in, pressing the STOP button on the bus at the last second to make sure no one follows, checking for cameras in public bathrooms and changing rooms 😔

But no comment section is complete without naysayers. There were a lot of guys who didn’t like the generalizations and a bunch who tried to prove that it’s more dangerous for men at night, ACTUALLY. But others pointed out that this is because they’re the ones who are outside…

also the whole “men are more likely to be assaulted espcially at night” yeah because they’re the ones out at night alone, not to mention they’re also the ones statistically doing the assaulting

There are a lot of beloved men who would be missed if they disappeared forever. Twenty-four hours is just a dream that won’t come true, not a threat. It’s also an opportunity to understand how there are still parts of the world that are closed to many people. If you feel personally attacked by that convo, you might be the reason why.