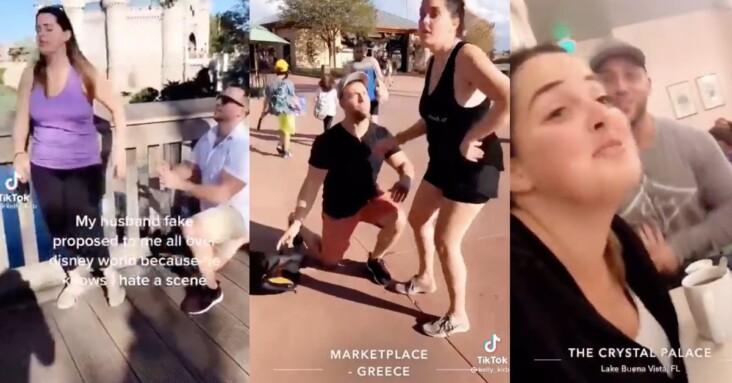 When you’ve been in a relationship a long time, there are certain inside jokes that only the two of you get. But @kelly_kirb on TikTok very generously shared an inside joke everyone could get, even though it was at her own expense.

The video she posted has over 2.5 million views on TikTok and has also been shared on Twitter, where it got even bigger.

The premise is very simple and she says it all with the caption, “My husband fake proposed to me all over Disney World because he knows I hate a scene.”

You can see him looking at her lovingly outside the Disney castle or whatever:

And then going for it as she desperately tries to pull away:

He runs up to her as she takes a moment to sit quietly:

He drops to his knee in the Marketplace:

And while they in line at Disney’s Animal Kingdom and there’s nowhere to run:

And don’t forget a proposal inside the crowded restaurant at The Crystal Palace:

Kelly looks so freaking irritated and embarrassed every single time he does it and he just won’t stop. It’s not clear who his co-conspirator behind the camera is, but they seem to find it hilarious, too, giggling hysterically over every bended knee:

On Twitter, people are loving the prank, because getting teased is some people’s love language:

He’s a top tier troll to his wife 😂, I wish to have half of his skills in the future for my husbae pic.twitter.com/sTqDdHWo2n

Not mine though, which is why I’m not married.

It’s not looking good for Kelly either. You know that now that this montage has gone mega-viral, he’s never gonna stop.

There will never be a moment’s peace for her at Disney World or anywhere. She’s going to get proposed to for the rest of her life—unless you propose a divorce.