Holly Polly, a woman who posts under the handle @swankysquirrel1 on TikTok shared some less-than-uplifting content, and it may be her most popular. In the TikTok video, she shares that she looked up the numbers on her student loans because she needed the information for something else. 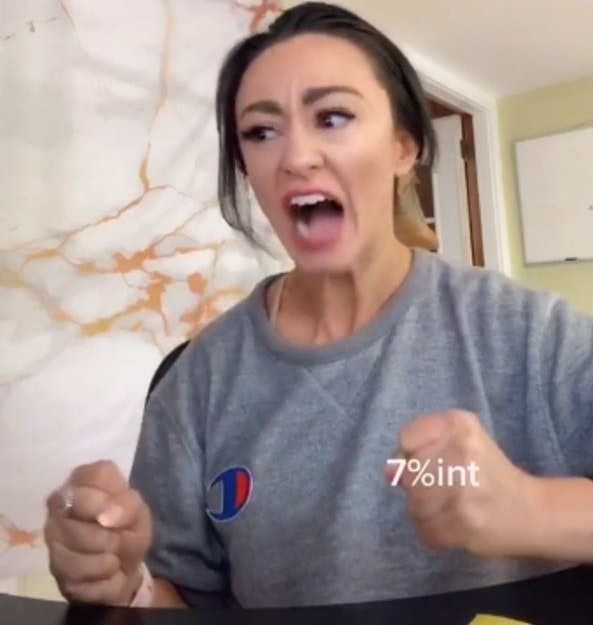 “How the f*ck is this possible?” she yells. She admits she might be late to the game but “student loans are bad.”

Y’all watch this video. ugh. My heart hurts. This system is so fucked pic.twitter.com/YUDSbNiWKu

Not everyone is so compassionate towards Holly Polly, saying she should have understood about compound interest and what it means to take out unsubsidized loans:

Fuck you. Most people take these loans out at 17-18 years only with no understanding of how it works. Also it shouldn’t be this way. We should be penalized for wanting an education and it should cost 250k for 80k in student loans. That’s disgusting

I’m sorry, but I’m not going feel bad for someone who willing took out student loans and didn’t know what interest is. No one forced you into anything. Save the sob stories for something that actually isn’t your fault.

But many more people wrote about how predatory student loans are. They directly target young people who may not have the financial literacy to understand what they are committing to. Not only that, but people are inundated with messages about how higher education is the only way to succeed and improve their lives, so these teens are more willing and ready to take on a huge financial burden to pay for that diploma. They might not even have many other options if they want a job. Not just a job in a particular field, but any job at all.

That’s not really true though; I beg kids I know to go to trade schools instead of colleges. College is not the place to go to make money or have a good life. I have a GED and never had any higher learning degrees or training and make more than most college educated people.

Bro I knew how intrest worked as a kid its pretty fucking easy to understand thats why I wasn’t dumb enough to go to college, but its the constant “You have to go to college to succeed” bullshit that gets a lot of kids and I can tell you from experience that’s not true

She probably took the loan as an 18-20 year old w/o knowing much about it. Student borrowing is predatory just like payday loans. The WH stripped away a payday loan regulation last month. Some of those loans are 300-400%. It’s open season.

The sick thing is that it’s fucking accumulative, like if you don’t pay, the 7% becomes 7.49% of the base amount which then keeps on multiplying quicker and quicker, instead of a stable amount, which means one month’s late payment can fuck you up very very hard m

Even if you get a good job still doesn’t mean them loans get paid. I know lawyers who make and have made 200k+ for years and still have student loans to pay off 20 years after graduating.

Some shared how the same thing has happened to them.

LOL!!!! One of my high school teachers said she’s paying $10 a month for her student loans till the day she dies. She’s not lookin back neither 🤷🏾‍♀️😂

It’s due to predatory practices by the loan servicer. The worst one is Navient, who I have. You can go on the Federal Student Aid site and do a direct consolidation to get a new servicer. I’m going thru this right now. Im in the same boat as her tho.

You can learn online quicker than in school. I was making payments for a few months when I realized it wasn’t going as far as I wanted. Hopped on reddit, learned about the snowball method and the avalanche method, restructured my payments, boom one loan already paid off

Yeah my school total for Associates, Bachlors, and Masters was about 45k. I paid it all as I went though working full time paying out 3k a month about. I really don’t feel sorry for anyone with school debt wanting freegiveness

It is a little late perhaps for Holly Polly to be realizing what she’s gotten herself into, but the fact that her story isn’t uncommon at all shows that it’s not really a “mistake” so much as it is a part of the design of education and capitalism. Put people in debt to survive the economy and they’ll never have financial freedom again.