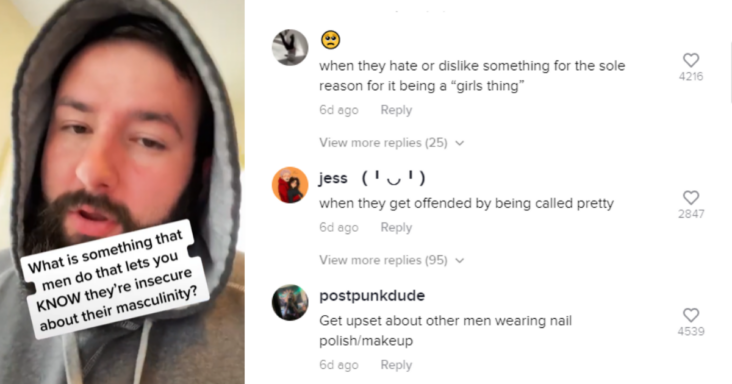 There are certain things some guys do that just let you know they are insecure about their masculinity. Big trucks and a tough-guy exterior are two well-known examples.

TikTok user Richard wanted to know other people’s examples, so he uploaded a video calling for users to share.

He starts the video with:

“What is something that men do that let’s you *know* they are insecure about their masculinity?”

Richard goes on to share his masculinity red flag.

“As soon as a man refers to himself as ‘an alpha,’ you know that motherf***er is insecure.”

In the comments, people gave their own examples of fragile masculinity warnings.

Other users took it a step further and recorded their own TikToks.

This guy says it’s any man who denies a post-B.J. kiss.

(And his 2 million-plus likes tell us others agree.)

This woman bought her boyfriend a new pair of boots in what she thought was his shoe size, 13, except… he wore a size nine.

This man lives in discomfort every day of his life just so people think he has large feet.

In this video, TikTok user @multistan79 puts men on blast who have a problem with K-Pop singers.

She has a point. What are K-Pop singers doing to hurt men??

Thanks to this user, we now know what the term “edgelord” means.

Anyway, quick note to men: Nobody is judging you as much as you think they are. You can relax and wear the correct size shoe.