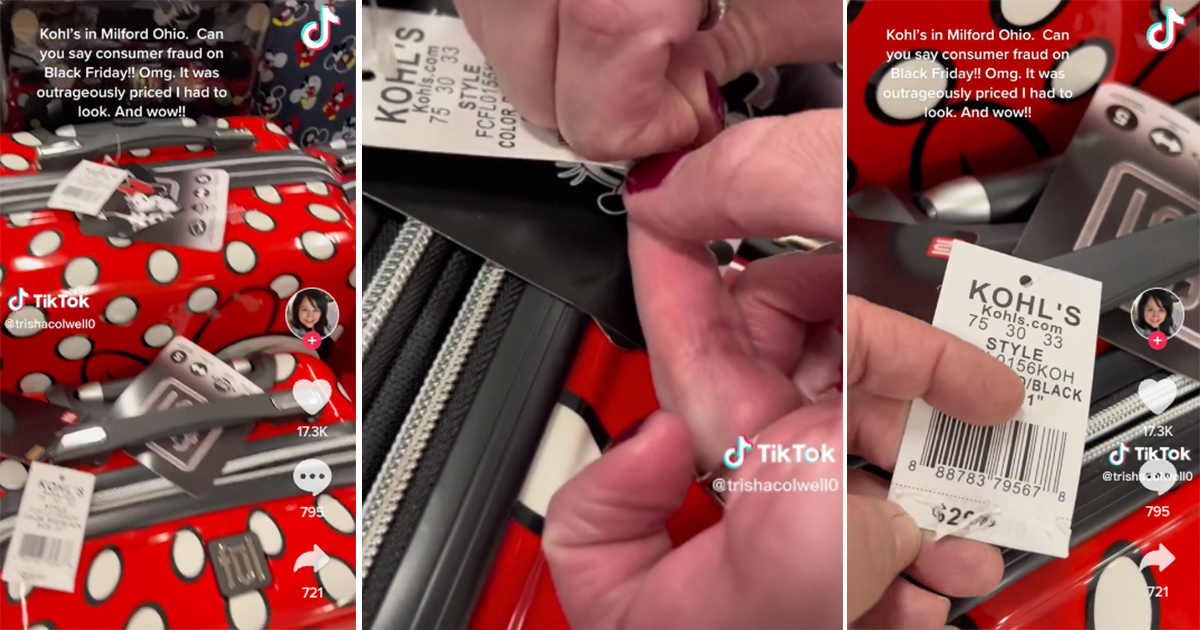 A Kohls customer has called out the company on what she believes to be a deceptive price hike that took place during their annual Black Friday sale.

In a recent TikTok video viewed more than 320,000 times, TikTok user Trisha Colwell (@trishacolwell0) noticed that a newer price tag had just been placed over the original pricing of an on-sale item- a set of Disney’s Minnie Mouse luggage.

In the video, Colwell shows a display of Disney luggage on sale at Kohl’s for 60% off. She then pans the camera over to the price tag which reads $440 meaning that particular luggage would be $176.00 with the sale. She then peels that label away to reveal that the luggage was originally priced at $319.99, meaning that a 60% off sale would yield quite a significant difference.

In the text overlay of the video she wrote, “Kohl’s in Milford, Ohio. Can you say consumer fraud on Black Friday!!”

Through further investigation, it’s not completely clear if Kohl’s increasing the price of its luggage is technically illegal.

Viewers had a few comments and insight to make on the situation:

Although the ethics of dynamic pricing may be murky, it’s technically legal in most situations.

In Ohio, there are no state laws that deal directly with price gouging, however state law does ban “‘unfair,’ ‘deceptive’ or ‘unconscionable’ sales practices,” according to Ohio’s Attorney General Office. The Wall Street Journal reports that in this day in age, even regular retail items are being priced more like airline tickets and gasoline in the sense that their prices fluctuate constantly. The phenomenon, known as dynamic pricing, is usually in response to factors such as “rising production, labor and shipping costs”, and in a grouped term; ‘inflation.’