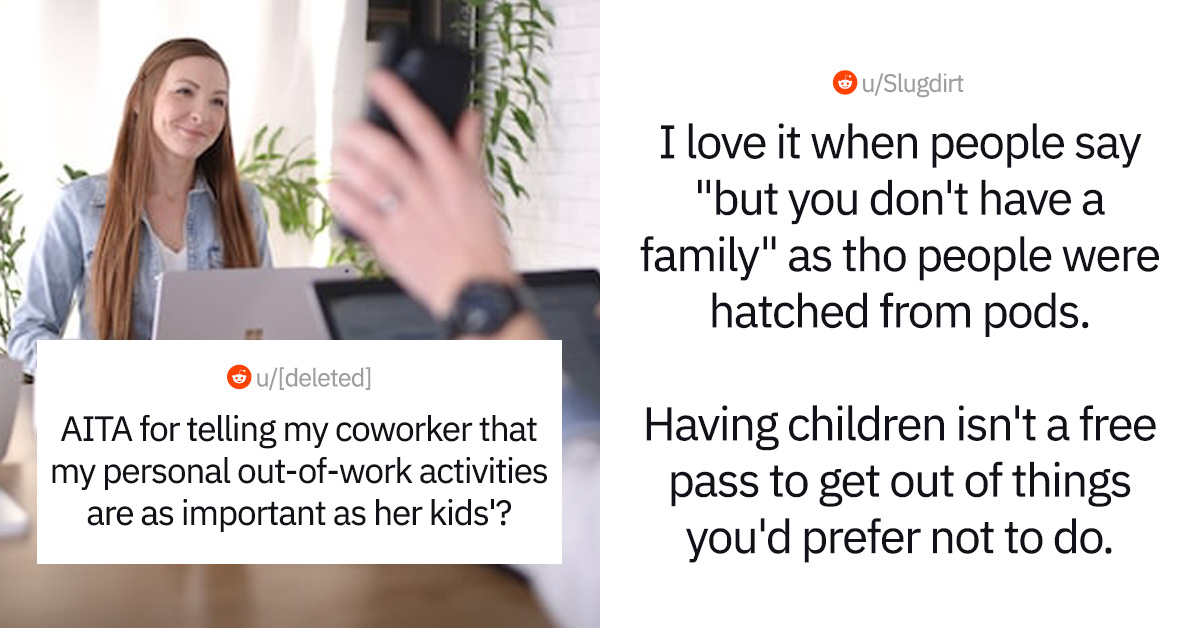 There’s nothing worse than a terrible coworker. Especially a coworker who assumes that you can drop everything at a moment’s notice to cater to their own personal needs.

One Redditor had an issue with a coworker where their boss emailed them both to ask if one of us could cover an evening call. It’s a 9-5 job but they occasionally have evening calls due to collaborators in different time zones. The coworker asked her to do it because her son had a soccer game, but I said that I can’t do it because I had a volleyball game.

Her coworker said she should do it because the soccer game is for her kid, and the volleyball game is less important because it’s hers.

So now, he’s turned to the popular subreddit “Am I The A**hole?” (AITA) to find out if he was wrong for sending his daughter to school with personalized supplies. Here’s what he said:

AITA for telling my coworker that my personal out-of-work activities are as important as her kids’?

I am a married 36-year-old woman with no plans to have kids. I recently had an issue with a coworker where our boss emailed her/I to ask if one of us could cover an evening call (it’s a 9-5 job but we occasionally have evening calls due to collaborators in different time zones).

She said that I should do it because the soccer game is for her kid and my volleyball game is just for me. I said that respectfully my outside-of-work commitments are not less important than hers because I don’t have children, and that she should take the call because I had taken the last two.

She scoffed at me, and I know that other people around the office have been gossiping about me since and saying that it was super messed up that I made her miss her kid’s soccer game.

I think that it’s incredibly important to support working mothers. I am always more than happy to accommodate the schedules of the mothers I work with when it doesn’t cause a significant inconvenience to me – for example, some coworkers leave early to pick up their kids (our company is great about that), and I’m happy to work project schedules around that.

I also would have taken that call if I hadn’t had a conflict as long as it wasn’t a pattern of me taking significantly more evening calls.

I talked to a friend about this (who is a mother), and she said that I should have just done it because people who don’t have kids really should have more empathy for working parents and we don’t understand how hard it is.

I said respectfully that I do understand that working mothers have much more stressful lives than I do, which is why I decided not to be a mother.

I also said that I can have respect and empathy for working mothers and also value my time/ choices equally. She similarly scoffed and said I don’t understand.

People overwhelmingly responded NTA. Here’s what commenters had to say: 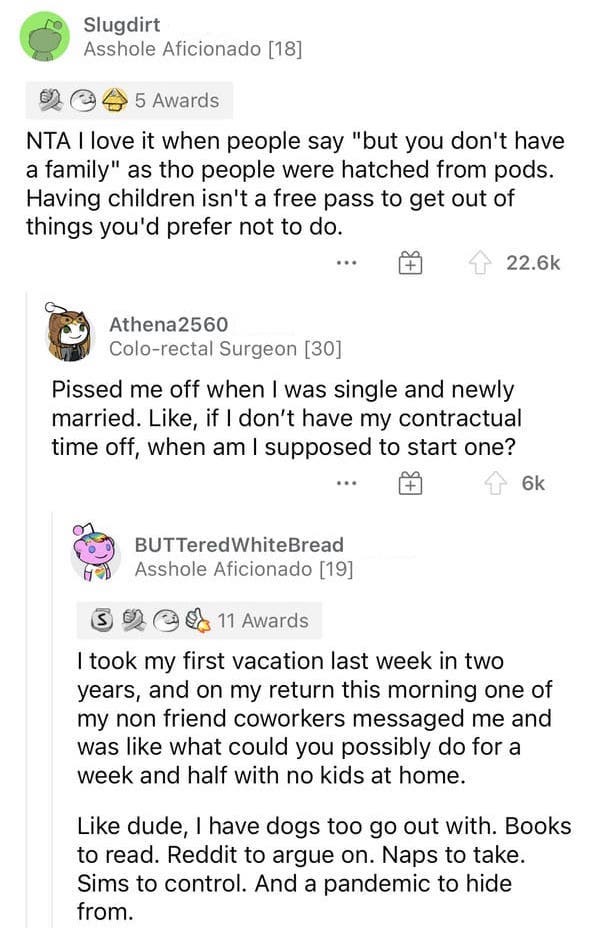 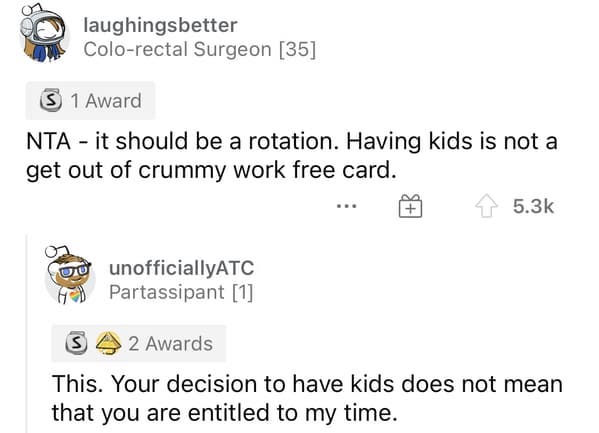 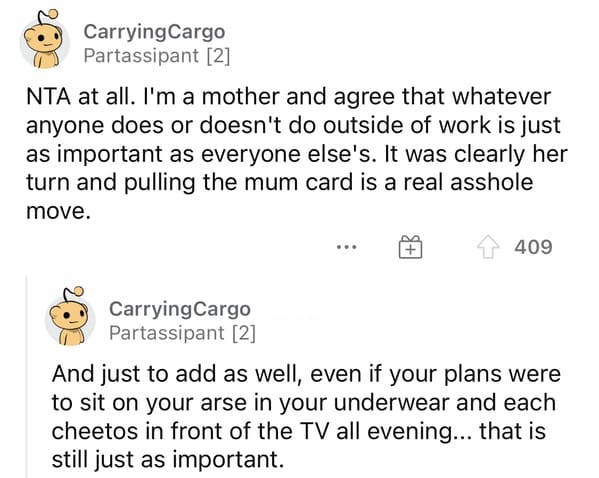 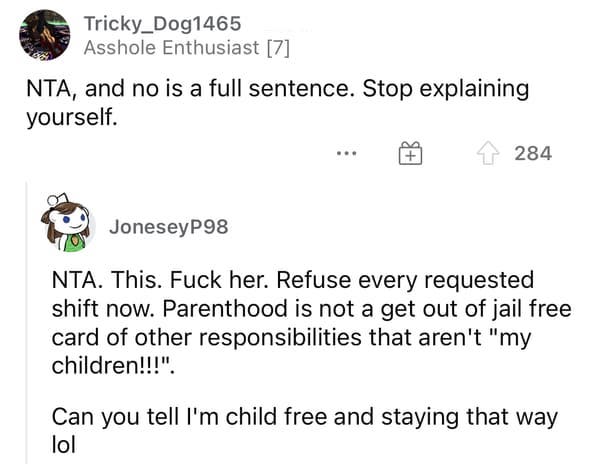 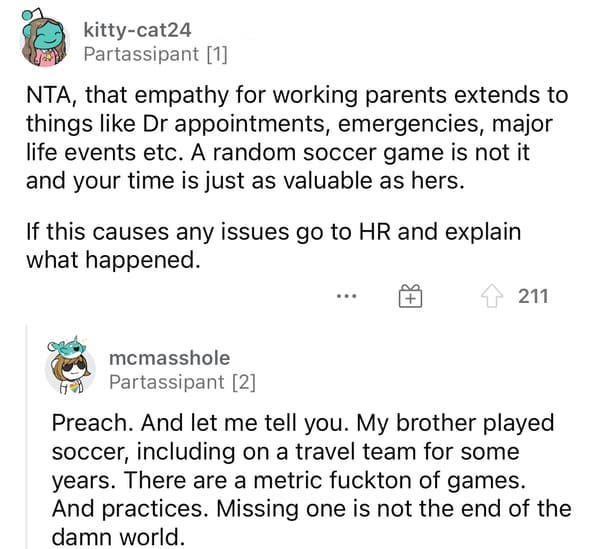 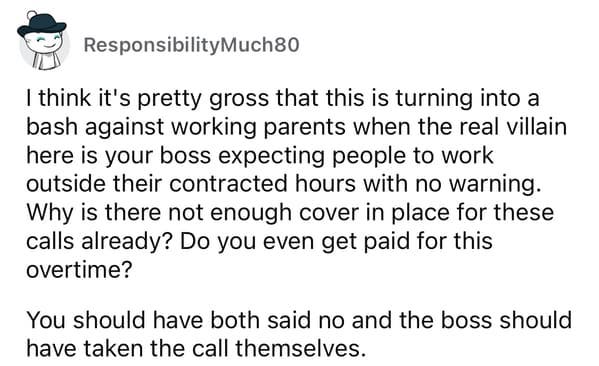