Ariel Winter, who plays Alex Dunphy on Modern Family, is not having any nonsense from the peanut gallery. The actress is known for responding to internet trolls who attack her body, and she inspires folks to speak up against online harassment. Lately, though, Winter has quieted her clap backs to haters, and in an interview with Us Weekly, she explained why she’s keeping a lower profile.

“I have had those moments where I’ve responded and I have regretted to responding to some of them, not all, but some I have regretted,” Winter said to Us Weekly. “I think as everybody knows, when somebody is posting that comment they want an argument, you know, they want you to respond.”

Last January, Winter directly responded to comments on her Instagram accusing her of taking illegal drugs to lose weight, explaining how the weight loss was a result of a change in antidepressants: 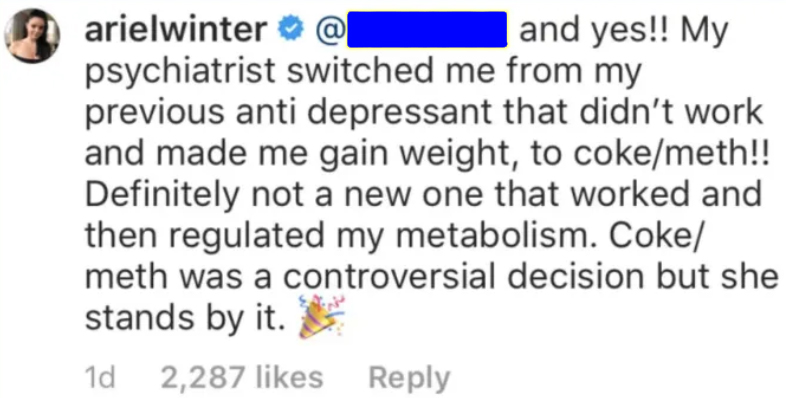 The actress defended herself further in a second comment, asking: “I couldn’t have lost weight for any other reason just because of the industry I’m in?” 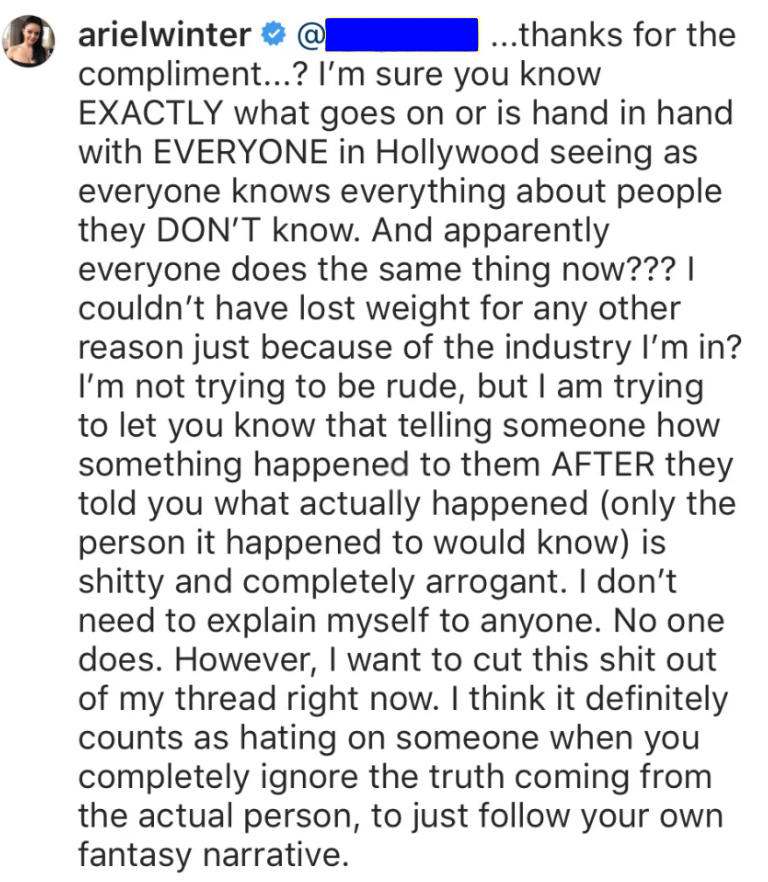 In the US Weekly interview, Winter also noted that a fan reached out to her after noticing that she “responds more to negative comments” than positive ones.

She didn’t realize that she was devoting so much time to haters, and began thinking about changing her commenting habits.

“I think about the positive comments way more and it affects me way more.  As a society we do comment more on the negative and that comment really hit me and so now I’m really trying to follow that of like, doing what I actually feel, which is to be thankful for the support and actually show that and kind of try and bury the negative.”

In other words, Winter understand trolls enjoy trolling and goading targets into giving them the attention that they crave. Anyone who’s spent time on social media has heard the age old rule: don’t feed the trolls, as irresistible as it may be.

We get it, sometimes it’s so difficult to stop yourself from getting into internet tiffs with people who say awful things, but it almost never leads to resolution. The troll feels no shame, and you feel emotionally exhausted after giving them the time of day. Lindy West’s incredible story on This American Life about confronting a troll — and getting a true, heartfelt apology — is the exception and not the rule.