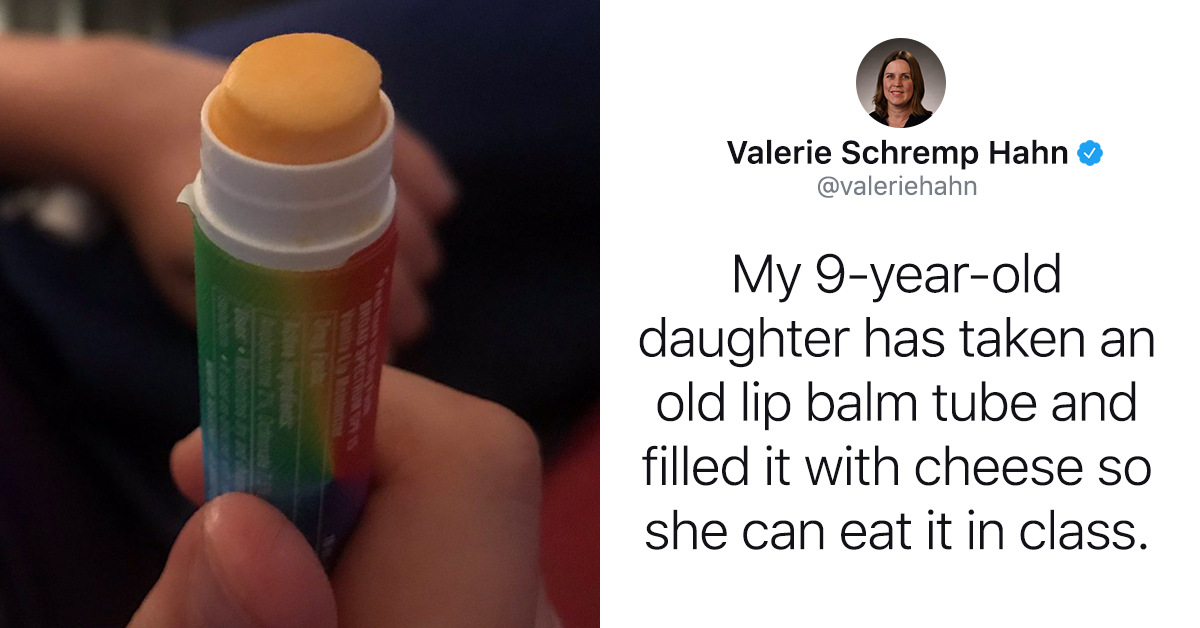 A 9-year-old girl from St. Louis, Missouri has taken life hacks to a new level by filling an empty chapstick tube with cheese so she can covertly snack in class.

Clearly life on Earth will never be the same.

According to BuzzFeed News, the girl (who is remaining anonymous) got the idea from a Youtube video, saying:

“I was just looking on YouTube because I was bored and I found this video and I decided to do it. I just took some of my dad’s cheese, sliced it up, and put it in the chapstick container.”

The girl was narced on by her mom, a reporter at the St. Louis Post-Dispatch, who couldn’t resist sharing her kid’s genius with the world.

My 9-year-old daughter has taken an old lip balm tube and filled it with cheese so she can eat it in class. pic.twitter.com/YEAqZx2wnr

I figured I should message her teacher. I’ll report back. pic.twitter.com/2HCmVRfi5j

The tweet quickly went viral, which may hurt the kid’s chances of smuggling her secret cheese into class.

On the other hand, pretty much everyone agreed that this kid is a regular manchego MacGyver.

dear MacArthur Fellows program, I’d like to nominate someone for the genius grant https://t.co/nBATDQREEf

Imagine you just failed your speed math worksheet and you look next to you and some girl eating her chapstick https://t.co/HxLgpHzykd

I am so proud of the next generation of female innovators https://t.co/7OjchmTvyN

Needless to say, everyone was deeply impressed by the student’s inventiveness and a little pissed that they didn’t think of this first.

Either way, the internet welcomed its new thought-leader and predicted great things for the girl.

Also big ups to this cheese whiz for selecting a sharp cheddar for her snack of choice. That shows good taste.  The only design flaw here is that no one eats cheese that slowly. Also if you’re seen licking or gnawing at your chapstick in class you may get sent to the school psychologist.