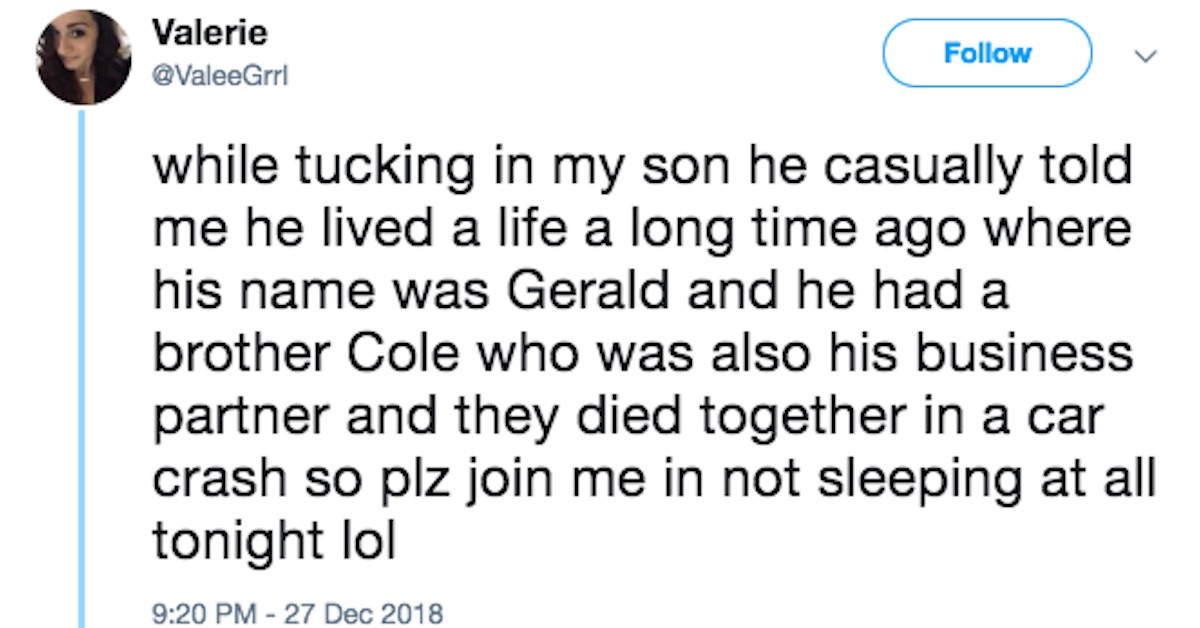 People always joke about how kids say the funniest things, but what about when they say scary things? Ever had a kid tell you something that makes the hair on your arms stand up? Like maybe about an imaginary friend that suddenly doesn’t sound quite as cute and innocuous as it did before?

One mom and Twitter user, Valerie (@valeegrrl), posted a tweet reading, “While tucking in my son he casually told me he lived a life a long time ago where his name was Gerald and he had a brother Cole who was also his business partner and they died together in a car crash so plz join me in not sleeping at all tonight lol.”

She posted a follow-up tweet with another in which her son told her, “Cole was so sad we died cuz he really loved our momma but I wasn’t too sad cuz I picked you to be my new momma.”

SON: Cole was so sad we died cuz he really loved our momma but I wasn’t too sad cuz I picked you to be my new momma

Soon other people began responding to Valerie’s tweet with stories of super eerie things their own kids had said.

When my daughter was 2, I was giving her a bath & sighed deeply, frustrated with the 2 year battle of ANY water touching her face = a full-blown meltdown. She looked up at me & said:

“I just scared, mommy, I drownded last time I was alive” & went back to playing with bath toys

My 3 year old will often talk about her friend George, and how he wears fun hats and likes to blow bubbles. That is her great grandpa. He died a full decade before she was born. She happens to share his birthday.

Sitting for my Nephew (4) and baby Niece. I heard him HYSTERICAL. Ran upstairs and he’s guarding his sister’s crib, sobbing and purple with anger. Told me the ‘Man’ was trying to make the baby walk. My Nephew was just screaming “She’s too small to walk! Leave her alone!” pic.twitter.com/2MkFJNWLOV

My son went to my ex mother-in-law’s house for Christmas when he was three. He came back and said “I saw Grandpa! No one could see him but me, but he was happy!”

His grandpa died a few months before I got pregnant with him. Lights stayed on that night.

I didn’t think anything of it despite it being strange for him to just know i spoke English but months later ma pulled out a picture of a half brother who died when she was a teenager and on my life it was him. He was the one who pulled me out.

My friend sd her grandkid was scared of the “Scratchy faced man” in her closet. 1 day she was organizing pictures & her grandkid sd “I know her” she sd no honey she died a long time ago, that’s my grandma. Kid sd “that’s the lady who protects me from the scratchy faced man.

years ago my baby brother passed away and 9 months later i had a little sister born prematurely. when she was about 4 one day she told my mom “i’m glad to be with you guys again…god took me away cuz i was very sick but that made you really sad. so he told me i could come back.”

Same thing happened w/ my son. His imaginary friend’s name was Jon. My brother Jon died 2 years before my son was born. I had pictures of Jon, and I said one time to my son “he would have loved you”, and my kid said “oh he does, and he misses you”. I cried in the closet.

When our son was 3 he was pissed he was in a timeout, so he went out his bedroom window onto the roof. EXTREMELY STEEP.
When I found him already back in his room, looking out the window, I asked him HOW DID YOU GET BACK IN?

“My Angel pushed me in.”

One night my then 5 year old daughter and I were in the basement when she pointed at a corner in a dark room and told me “there’s a little kid there” I said, “no, there’s no kid there” and she raised her voice and said “YES, RIGHT THERE! Look!” I picked her up and ran upstairs 😐

A good friend has a niece who said to her mom at the age or 4, as mom was tucking her in, “Mama the ceiling!” “What about it?” “It’s full of blood!”

When my older brother was little, he asked my mom for two glasses of water. He said one was for him and the other for the man in the kitchen. No one was home but then two. When my mom told him to describe the man, he described our grandpa who died a couple months b4 he was born

During a t-storm told my 4 y/o thunder was my pop and nana bowling in heaven. My 6 y/o asked nana’s name. I said Stella. Little one says I know Stella, she sits on my dresser and talks to me. Asked her what color hair she had,she said red. She was right. Never saw a pic of her.

Once while tucking in my then-3 yo, he pointed into the darkness & said, “Who’s that man?” I said, “What man?” He said, “The one standing in the corner wearing the hat.” 😳
W.T.FFFFFFFFFF!!!! pic.twitter.com/80FLZ4fA0g

…friend's grandpa with a baby in his arms. He said "I found Julia's baby girl, I'm going to keep her safe and warm." My best friend told her mother she suddenly felt warm again.
A few hours later the phone rang, they were told that grandpa died last night.