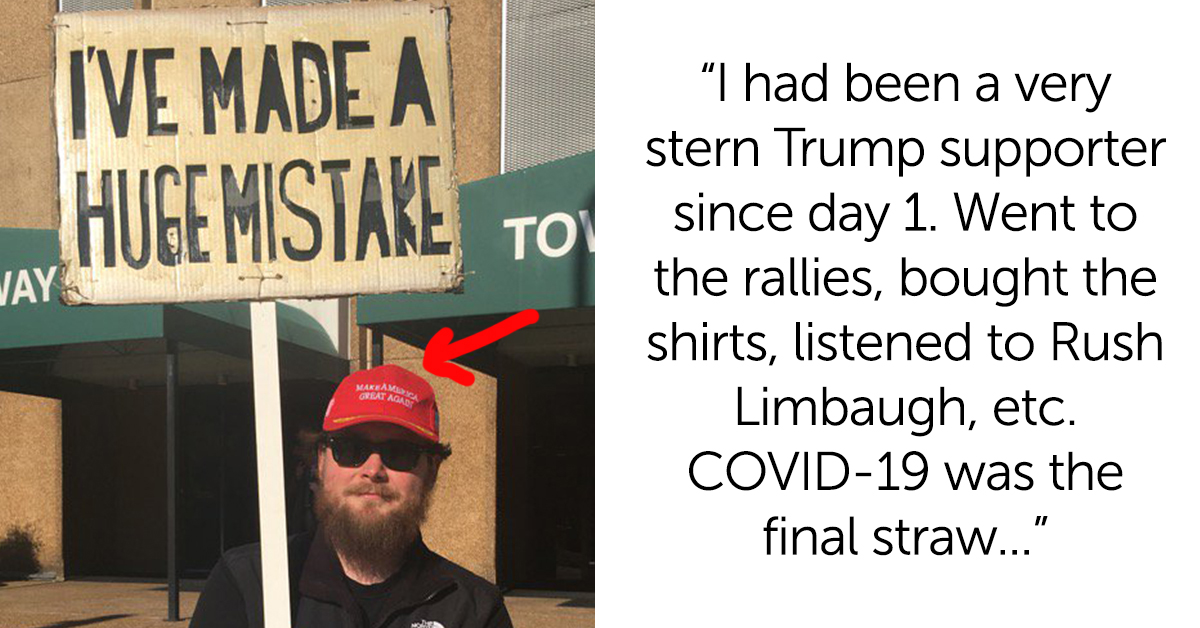 If you’ve given up hope on friends or family disavowing Donald Trump and assuring you they will not vote for him, that’s okay. There are a lot of loyal followers, and it can be impossible to dissuade them. However, not all people are that destructively stubborn, and some folks are exclaiming that they made a huge mistake when they voted for Trump and would not vote for him again. On Reddit, these people are describing the exact moment when they turned their support away from Trump—and there are A LOT of different moments.

“Not me, but a family member. He’s a staunch Catholic and firm Republican. What happened in Lafayette Park was what finally did it for him. Having Federal agents literally ASSAULT peaceful protesters so he could walk across the street for a photo op where he waved around an upside down Bible using a church as a prop was more than he could take.” — aCertainTechnician

“His response to the protests. I truly believe he has lost his fucking mind now.” — ggrizzlyy

“My Christian grandparents totally did a 180 on their support for him very recently after he had that photo op while holding the bible after tear gassing protesters. My grandfather told me that if Jesus were in DC that day he would have been standing with the peaceful protesters and not with him. I was frustrated when my grandfather supported Trump through all his scandals, but instead of saying, ‘I told you so!’ I supported his change of view. Sometimes it takes longer for certain people to change and I’m so glad he did.” — r1chghetto

“I had been a very stern Trump supporter since day 1. Went to the rallies, bought the shirts, listened to Rush Limbaugh, etc. COVID-19 was the final straw. A friend of mine put it in a good way, ‘At some point, we decided it was bad to listen to scientists and college educated professionals.’ I had been leaning away for a while and then he tweeted out ‘when the looting starts, the shooting starts.’ He’s a fucking idiot.” — MrFrogBog

“‘This is a good day for George Floyd, he is smiling down upon us’ was what did it for me. I’ve been ambivalent for a while, liking certain things and disliking others. Was planning to abstain from the presidential part of the ballot, or write in. I might actually vote for Biden now instead.” — theycallmecliff

“I joined the Marine Corps and befriended a few minorities and just talking with them and learning their experiences is what honestly changed my beliefs the most. Especially my Sergeant, a Hispanic dude, he loved to talk about politics just as much as I did, but he was a liberal and I wasn’t, which was fine actually because we both were capable of talking and even disagreeing without it turning into an argument. We became good friends (even though it was against the UCMJ, it was technically fraternitizing due to our ranks.) were both out now and still talk. I’m incredibly thankful for the experience honestly, it changed my total belief system for the better. I even attended a protest in Oakland the other week (where I got tear gassed and hit with a pepper ball) and have been to a couple smaller ones since. I’m proud of the progress I’ve made.” — BronzePug

“I mostly avoided the news and politics because it was such a contentious subject. I defended Trump saying, ‘nobody’s all bad. Clearly there must be some sort of misunderstanding. You’re being too hard on him. The media just loves tearing people apart.’ One day, someone quoted some completely ludicrous, childish tweet of his, and, to prove they were exaggerating or taking things out of context, I looked for Trump on Twitter to find the context and actual quote. I was absolutely horrified. I learned a lot that day. I still read his Twitter feed regularly and continue to be impressed at how much pride he takes in being a completely horrible excuse for a human being.” — obliviocelot

“I wouldn’t say I supported him because I didn’t vote in 2016. I didn’t like my options (Already learned my lesson. No need for a lecture). When he was elected I thought maybe he wouldn’t be too bad, and honestly didn’t give a shit about who the president was because it never seemed to make a difference in my life. But my last straw was his bizarre comments and rants about wind turbines, and his overall anti environment stance. Of course his handling of the pandemic and George Floyd protests have fueled a hatred for him that I didn’t know I was capable of having for a politician. All I can do to get rid of him is vote and I’m making damn sure i do it this time. Fuck him.” — flashrabbit7892

“I’ll admit was on the maybe fence for a while. I liked the idea that he didn’t give a fuck, wasn’t being pressured by lobbyists, and had some party agnostic ideas. I’m over it now. He’s a textbook demagogue. Blames the media if they point out lies, appeals to anger, blames the others, and dances confidently in front of the camera. Moreover, he can’t control himself. He reminds me of my dog. Her prey drive is through the roof. If she’s off leash she will bolt after worthless floating shopping bags in the road. Even if it means running into traffic and potentially killing herself.” — OpportunityCostX

“Originally, I supported Trump in 2016 because I was pressured by members of my family, who are very conservative and, to be honest, a little racist. I continued to support him despite what was going on until they moved across the country in 2018. During the big shutdown in 2019, my belief in Trump started to fall in some areas and I looked more into him and all the nasty shit he was involved in just destroyed my confidence for him. In the past few months, his handling of the pandemic and George Floyd’s murder made me hate him. Looking back, I realize I was very wrong and very misguided, and I’ll do anything and everything to help get his ass out in November.” — demoniclyde