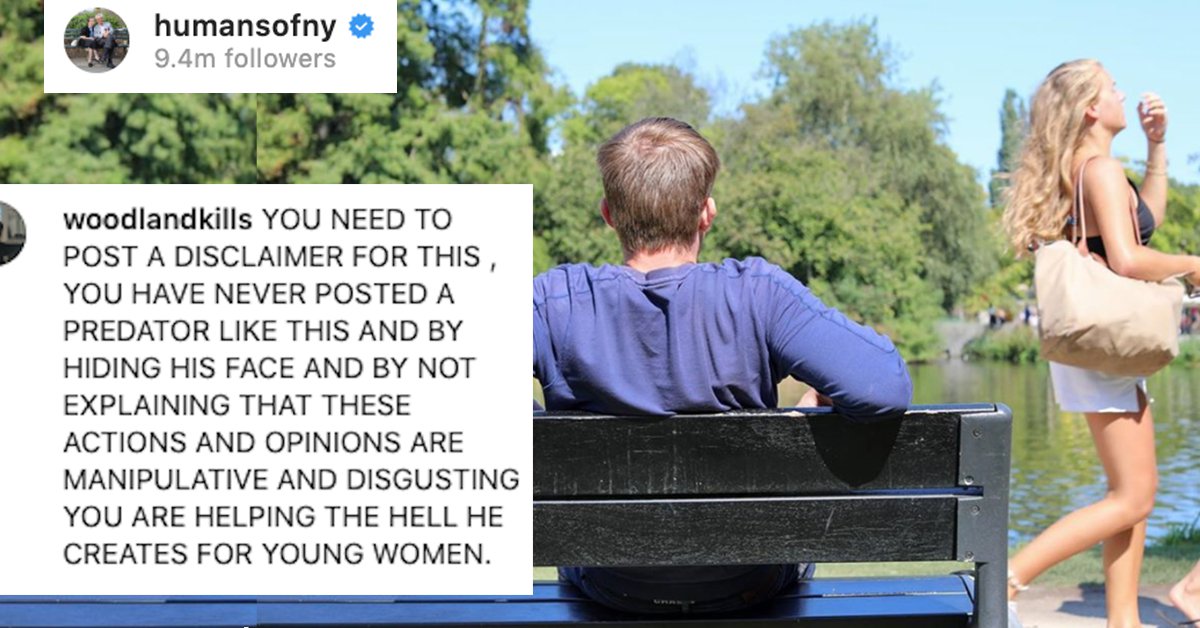 Humans of New York is a photo series that has been around for a very long time, so long that they’ve been going to lots of other places besides New York.

Right now, they’re exploring Amsterdam in the Netherlands. The formula for a HONY post is to share an image of someone and a short monologue about who they are.

There have been controversial HONY posts over the years because not everyone is great. But a recent one about an “incel” guy turned Pick Up Artist has got people really raging.

The image shows the back of a man on a bench looking out at some women passing by—women who probably didn’t agree to help illustrate the following description:

I was like an ‘incel’ kid. I’d never had a girlfriend. I’d only had sex with prostitutes. I was very suicidal. Then one day I was standing next to a cute girl at a bus stop, and I googled: ‘How to approach women.’ That’s when I came across a forum for pick-up artists. It’s exactly what I’d been looking for. It seemed like a cure for my autism. I watched all the videos I could find. I started working out at a gym. I’d spend all day approaching women. Soon I was only hanging out with other pick-up artists. They respected me. They wanted to learn from me. Finally there was something I was good at.

Okay, so this guy was lonely and he felt like he’d finally figured out a way to connect with women. That’s somewhat relatable, right? Well, it gets much, much worse:

Right now I have over one thousand numbers in my phone. It’s a bit like gambling. Sometimes it goes well. Sometimes it doesn’t. But you always have the chance for sex. There are so many tricks to learn. Women have emotional brains. They get addicted to feelings. You can use that to your advantage.

The first time you meet her—tell her she looks amazing. But never give her a full compliment again. She’ll always chase that validation. It’s like a drug. Tell her ‘she looks beautiful for her age.’ Tell her ‘she looks good in this lighting.’ Keep her insecure with half compliments. Keep her feeling like there’s something wrong with her. Like she’s not good enough for you. Like she needs sex for validation. Of course it’s manipulation, but why should I care? I’ve been manipulated so many times in my life.

Wow. Go to hell, dude. I hope you lose it all on the crap table, or whatever this gambling metaphor is. 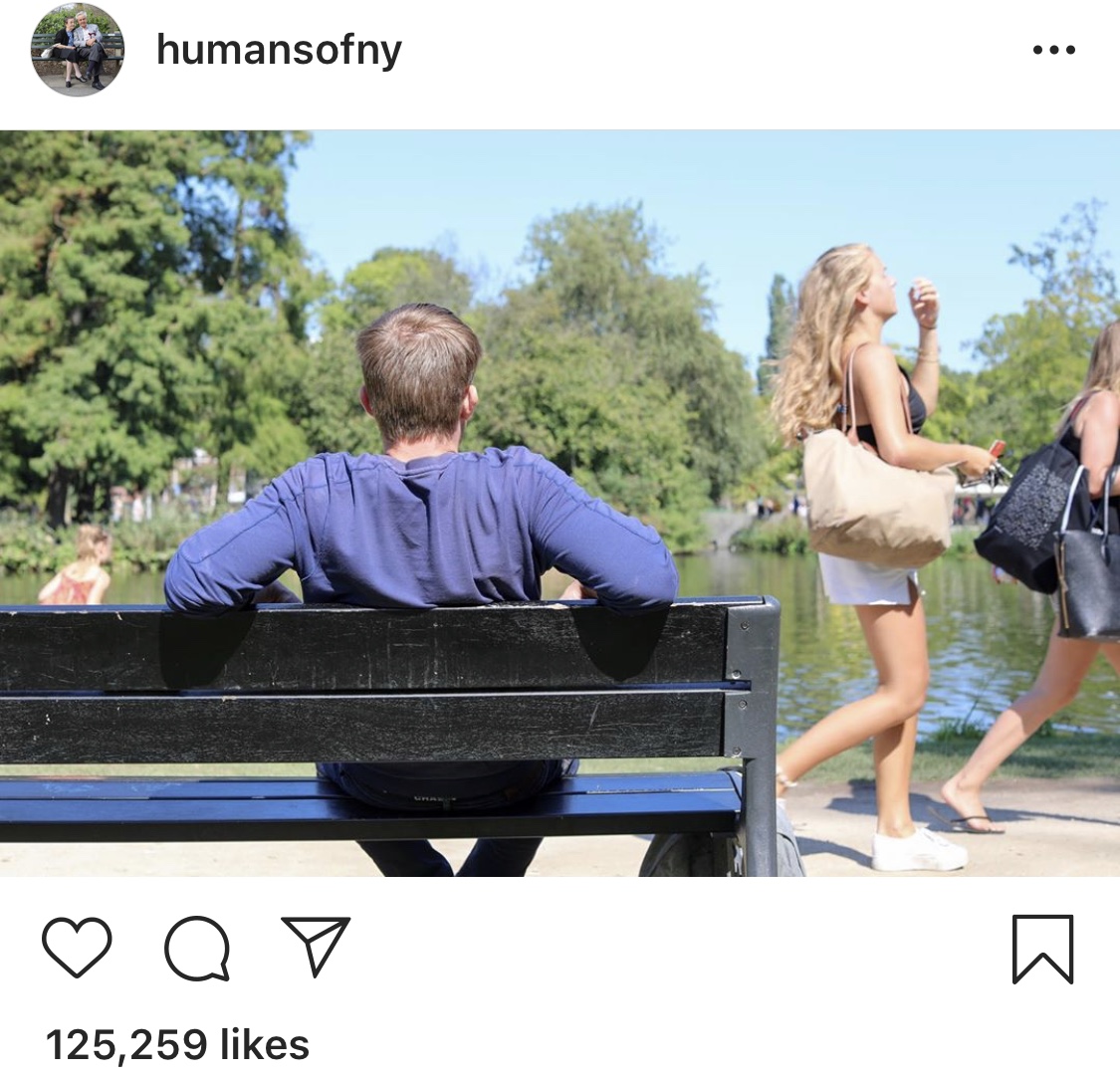 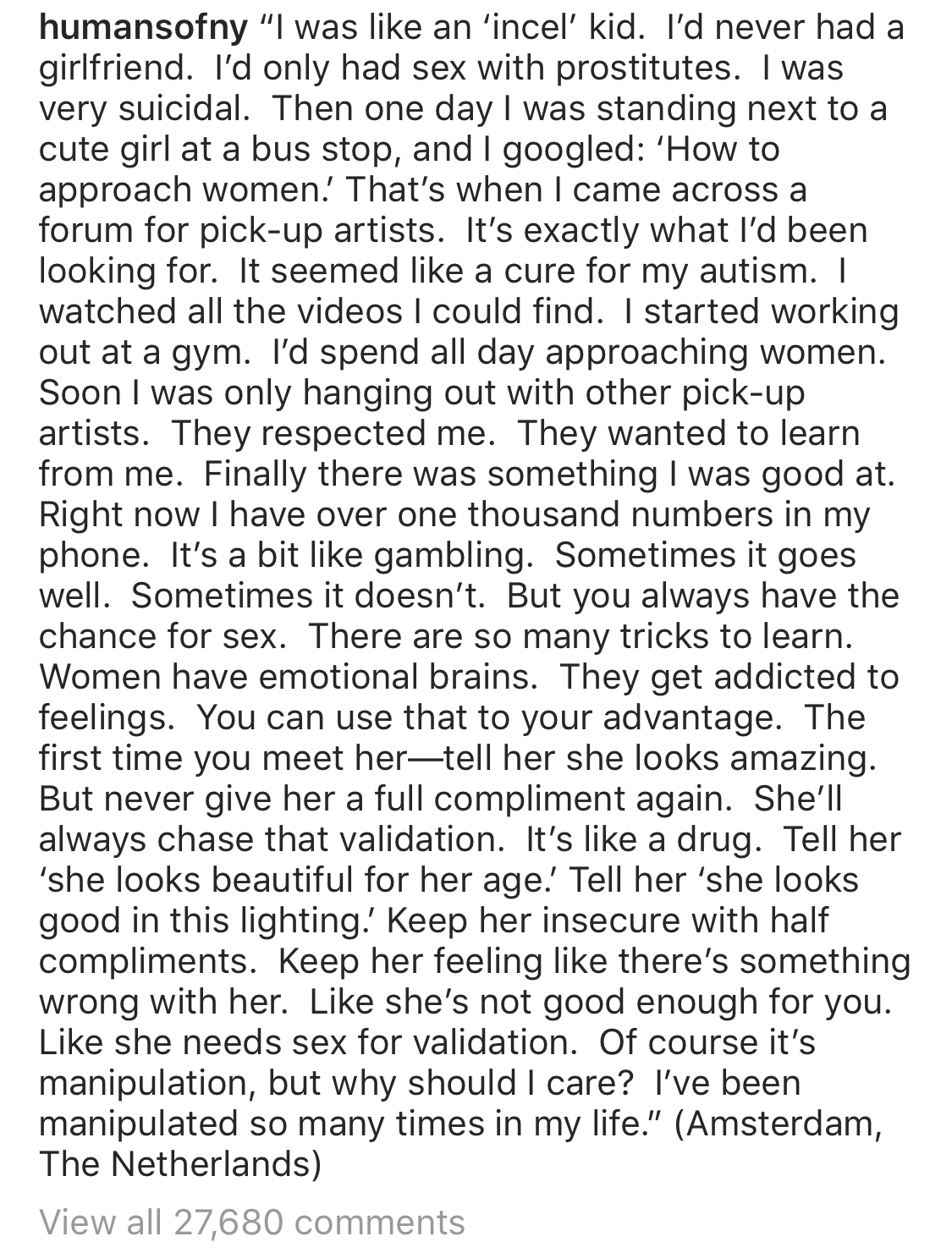 An ordinary HONY post on Instagram has maybe between three and five thousand comments. This one has over 25k. The guys who consider themselves incels, or involuntary celibates, are pretty good about swarming a post, as are the Pick Up Artists.

But a lot of the comments are from people who want to see this picture taken down because this anonymous guy is spreading pretty horrible ideas about what comes down to emotional abuse based on deep sexism. They think HONY is providing a platform for harmful ideas. Also, being autistic doesn’t make everybody into a sociopath! There’s just so much wrong about this story.

There are a lot of people out there who think of manipulating people’s feelings as a game to win sex. While I agree that these sorts of concepts shouldn’t be spread farther, this seemed like the aptest comment in a way:

If you’re really having trouble connecting, treat other people like human beings.