There’s nothing like a global crisis to reveal the quality of the world’s leaders (or lack thereof) and the COVID-19/Coronavirus pandemic currently roiling the world has done just that.

Not only does it seem like letting a reality TV host and mail-order-steak salesman named Donald Trump run the most powerful country in the world may have been a bad idea, but there are other smaller players in our political ecosystem who are revealing their cravenness, ignorance, and gullibility one by one.

Today’s idiot is Florida senator Marco Rubio (AKA Liddle Marco) who tweeted about coronavirus response measures but tragically misspelled the very concept he was trying to reassure the public about. It’s “martial law” as in “military” and has nothing to do with some dude named Marshall or a department store where you can buy fitted sheets. 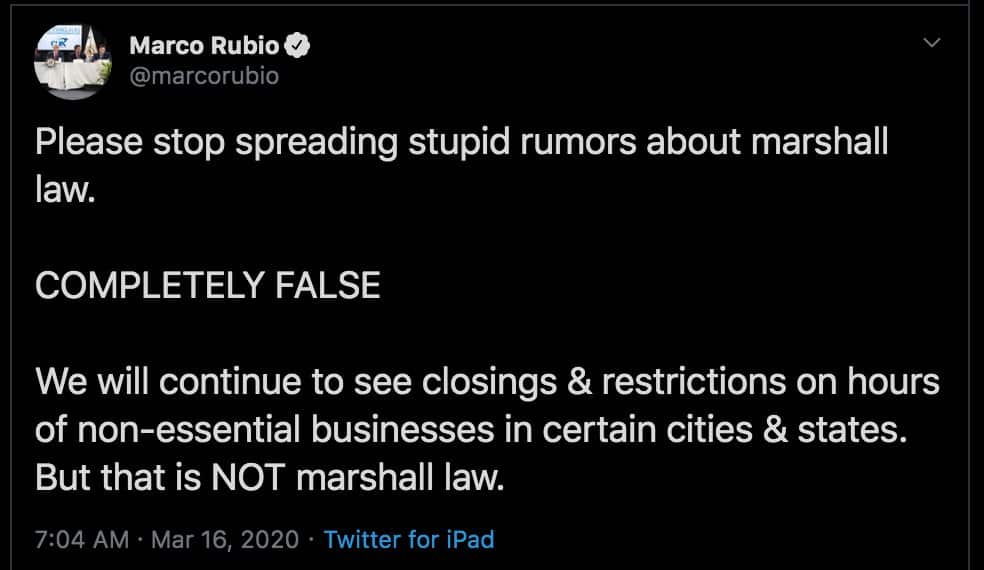 Since everyone is at home anxious, bored, and hovering over their Twitter accounts, the roasts and responses to Rubio’s flub came quick.

a helpful primer for your family, facebook friends, and occasional senator:

“marshall law” is one of them snitch-ass Paw Patrol dogs

How was Marshall Law not an Eminem album?

if “Marshall Law” isn’t Eminem’s next diss track what are we even doing pic.twitter.com/8ujdrl39Bt

I am a huge fan of Marshall Law, personally. https://t.co/3gm4ivkXK4 pic.twitter.com/x2FbNhwpDf

The fact that Marshall Law is trending and not Martial Law shows you how stupid the people of Twitter really are. pic.twitter.com/hvLmzmzpS8