The press release email for Meghan Trainor’s new EP The Love Train has gone viral after single-handedly disproving the motto “all publicity is good publicity.”

Initially sent to journalists to promote Trainor’s new album, the press release in question is being hailed as the thirstiest and most parched piece of marketing material in the history of the entertainment industry. It is so stuffed with millennial slang—including phrases like “Choo choo betch” and “smashing bae’s junk to smithereens”— that it at times doesn’t make any sense at all. A sample:

It’s difficult to figure out where to even begin, but Billboard being “wet” for one of Trainor’s songs seems like a decent starting point. Then “wig snatch,” and “Awww Fest” followed immediately by “all the feels (and then more feels).” I don’t really have any commentary besides pointing out the fact that this seems like the beginning of the end for us as a species. 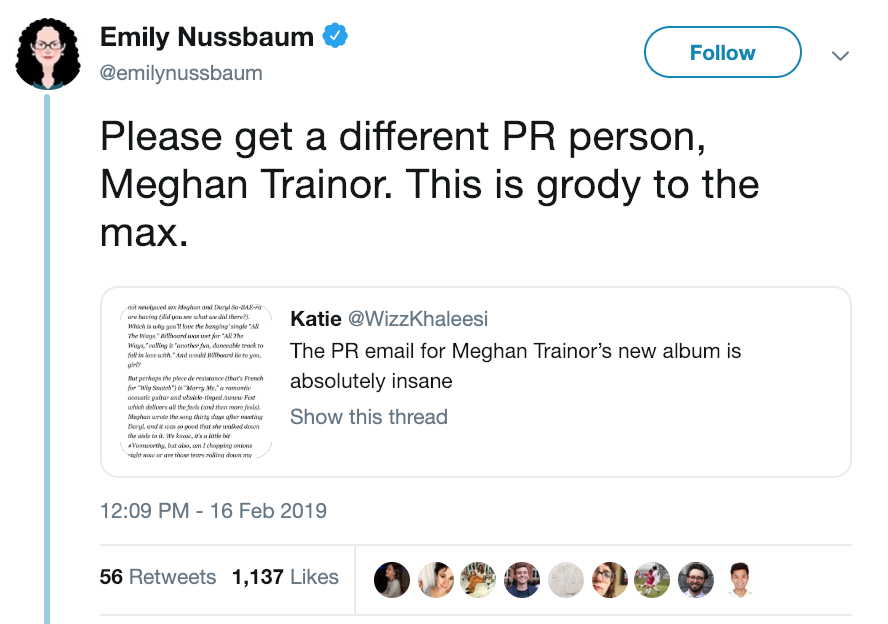 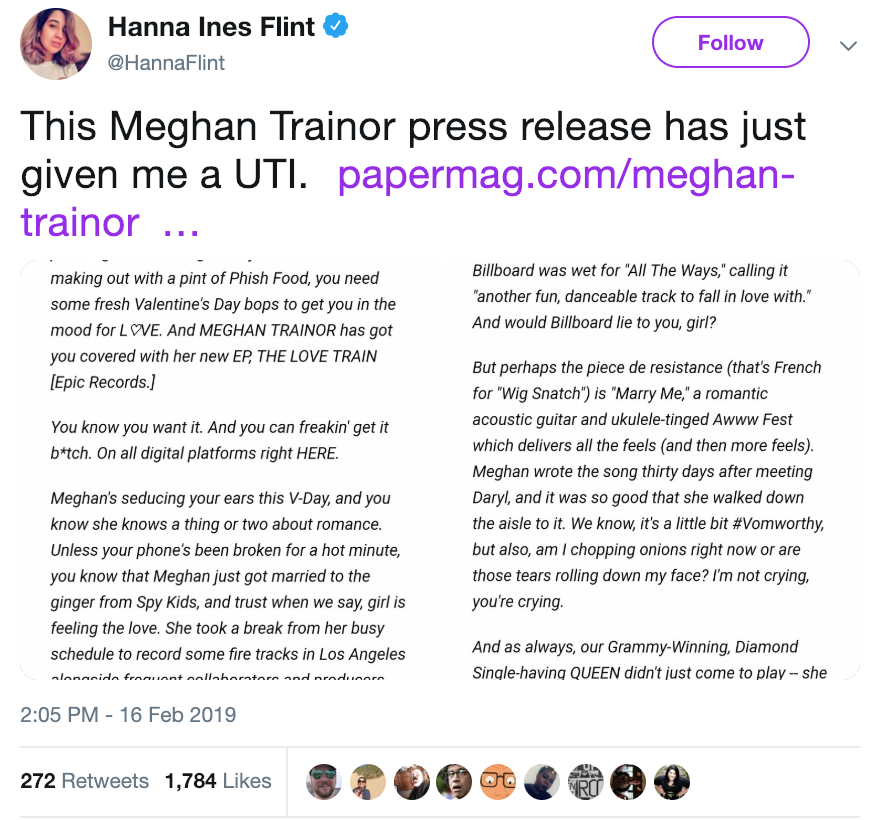 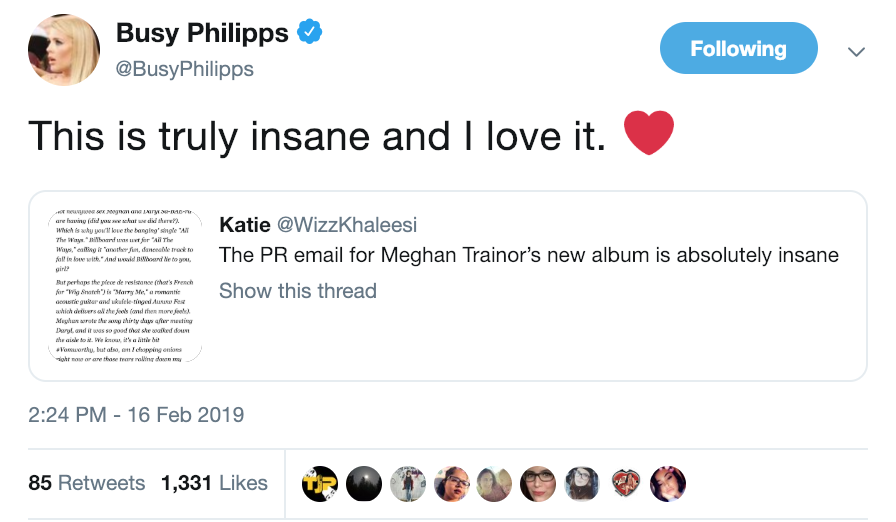 Everything started to make more sense when comedy writer Caroline Goldfarb revealed that she ghostwrote the “experimental” press release as a joke, and was herself surprised to see how much attention it received. 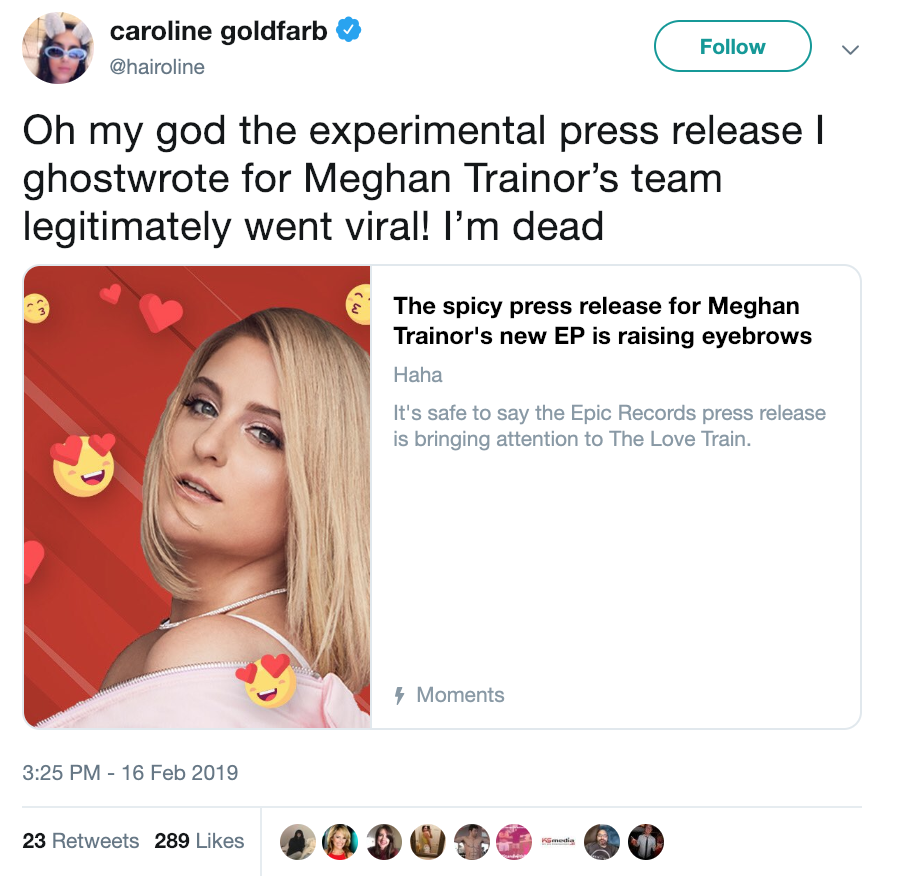 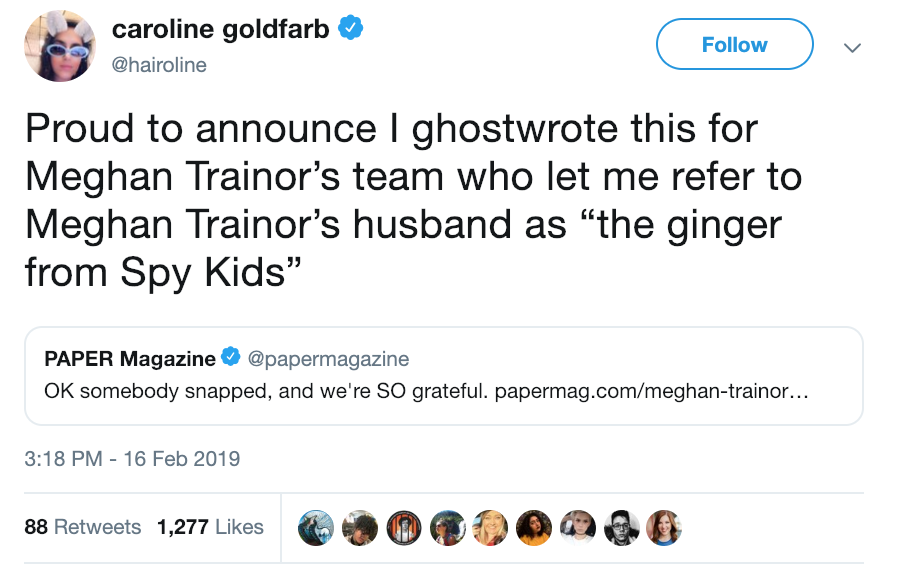 In truth, this feels like an appropriate way to find out Meghan Trainor married the boy from Spy Kids.

Read the press release in its entirety below:

February 8, 2019 – Los Angeles, CA) — Valentine’s Day is around the corner, and whether you’re planning on smashing bae’s junk to smithereens or making out with a pint of Phish Food, you need some fresh Valentine’s Day bops to get you in the mood for L♡VE. And MEGHAN TRAINOR has got you covered with her new EP, THE LOVE TRAIN [Epic Records.]

You know you want it. And you can freakin’ get it b*tch. On all digital platforms right HERE.

Meghan’s seducing your ears this V-Day, and you know she knows a thing or two about romance. Unless your phone’s been broken for a hot minute, you know that Meghan just got married to the ginger from Spy Kids, and trust when we say, girl is feeling the love. She took a break from her busy schedule to record some fire tracks in Los Angeles alongside frequent collaborators and producers Andrew Wells [5SOS, Fall Out Boy, Jason Mraz], J KASH (Maroon 5, Charlie Puth, Kesha) and Tyler Johnson [Harry Styles, CAM].

We know you want to hear songs about all the hot newlywed sex Meghan and Daryl Sa-BAE-ra are having (did you see what we did there?). Which is why you’ll love the banging’ single “All The Ways.” Billboard was wet for “All The Ways,” calling it “another fun, danceable track to fall in love with.” And would Billboard lie to you, girl?

But perhaps the piece de resistance (that’s French for “Wig Snatch”) is “Marry Me,” a romantic acoustic guitar and ukulele-tinged Awww Fest which delivers all the feels (and then more feels). Meghan wrote the song thirty days after meeting Daryl, and it was so good that she walked down the aisle to it. We know, it’s a little bit #Vomworthy, but also, am I chopping onions right now or are those tears rolling down my face? I’m not crying, you’re crying.

And as always, our Grammy-Winning, Diamond Single-having QUEEN didn’t just come to play — she came to slay. She’s serving vocals on the passionate, Celine Dion-esque power ballad “After You.” Plus, Meghan’s serving your insatiable thirst for dance-ready bops with the upbeat banger that is “Foolish.” It slaps so hard you’ll be stanning for days. “As if all the PDA, including foot massages, butterfly kisses and piggy back rides aren’t cringe worthy enough,” says her brother and videographer Ryan… “I’ve got to film it all!”

Choo choo betch! The Love Train is leaving the station and you better get on board.

Be on the lookout for more surprises very soon as she prepares for a landmark 2019.