With the U.S. hitting what might be the highest rate of unemployment since the Great Depression, thousands of businesses struggling to stay afloat, and the terrifying prospect of hospitals having inadequate equipment to treat COVID-19 patients, a lot of people are wondering…where the billionaires at?

Elon Musk is being terrible, as usual. Mike Bloomberg disappeared along with promises of jobs after being roasted to a crisp by Elizabeth Warren at the Democratic debates. And Jeff Bezos is rolling in Amazon money as homebound people order everything online—and ignoring the plight of sick workers.

A Tumblr post about the greed of billionaires has gone viral again as people wonder why tax dollars aren’t swooping in to save the American people. It was started by a Twitter user named Theresa who has since deleted her Tweet.

“I don’t get people like Bezos,” she wrote. “If I had billions of dollars, I would impulsively start fixing sh*t. Homeless vets? I don’t think so. Hungry children? Not on my watch. He could be Batman. What a waste.” 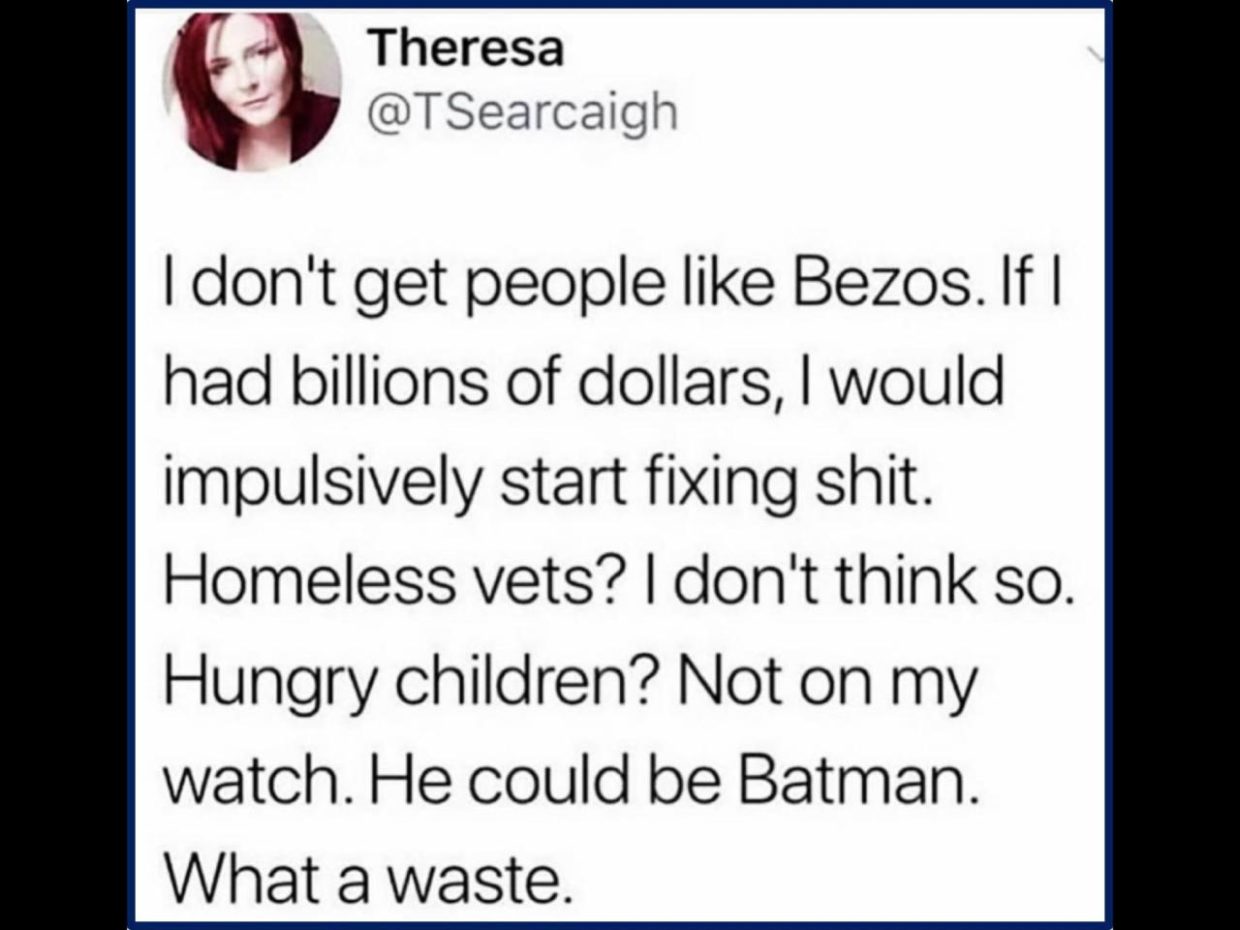 The short answer is that Bezos doesn’t care about homeless vets or hungry children. There are no real Batmans. Sorry. But Tumblr user olivesawl broke down why no one gets as rich as Bezos while actually caring about other people.

“If you’re the kind of person who would do that, you never become Bezos in the first place,” they wrote. “My Dad owned a business my whole life. It was profitable, but it didn’t expand. I ask him once why he never grew it, and he said it’s nearly impossible without climbing on someone’s back–your vendors, your customers, your employees. Particularly that last one.”

“You don’t wait until your business is big to be a good human being. The very first time you have to choose between your own profit and your employees health insurance, you choose the later. You give maternity leave even though the government doesn’t make you. You dock your own salary to not lay people off during a recession. You have adequate staffing and reliable hours. Anybody who says you can’t run a retail business on a normal, reasonable, predictable schedule you know in advance is full of sh*t.”

“My Dad did it for 35 years (always have one more person than you think you need, and 98% of your staffing problems vanish). It’s just not maximum profit. If you don’t prioritize extracting profit from every corner of your business, you never become rich enough to give billions away.”

And according to olivesawl, these business practices made Daddio a good boss to work for.

“One of the things my father is proud of is that by the time he retired they hadn’t needed to take a help wanted ad in 30 years. Turnover was low, and when a spot opened, referrals filled it,” they wrote.

Others have shared stories about family members who ran businesses in a similar way, and who also never reach Batman application status:

Can you be a billionaire and be a good person? Almost certainly not, but when you have that much money no one can tell you anything. That’s kind of the problem.