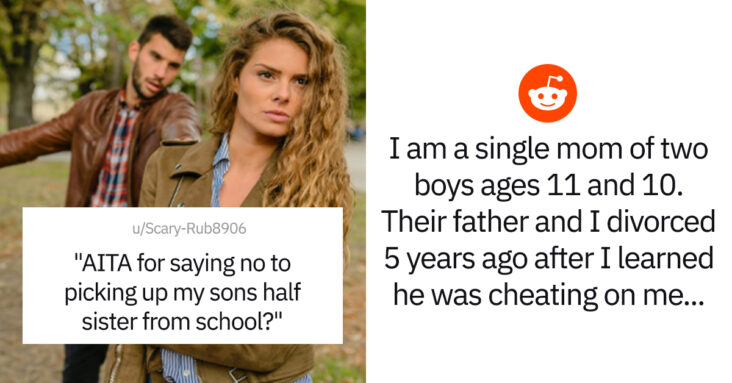 Divorces can be mutual and carried through in a civilized way, or they can be traumatically messy. Throw in some shared and not-shared children and things get even messier. It’s one thing to help out your ex if they deserve it, but your intuition will never lie, and it’s easy to see manipulation once your divorce lawyer removes your rose-colored glasses.

One Redditor recently went through a pretty dramatic divorce after her husband of 13 years decided to cheat and leave her for his affair partner. His children with his new wife, one of whom was conceived before the divorce, are getting the blunt end of the situation. When OP (u/Scary-Rub8906) was called by her ex’s school and asked to pick up his sick daughter, respectively. she said no. Now she’s wondering if she made the right decision or not. The post was listed in the “AITA?” subreddit and can be found below, along with some of the top comments.

OP asked: “AITA for saying no to picking up my sons half sister from school?”

I am a single mom of two boys ages 11 and 10. Their father and I divorced 5 years ago after I learned he was cheating on me. He got her pregnant either right before he told me, and that was why he confessed, or right after. But our divorce was not an easy one. He wanted to stay “friends” and I could not look at him after what he did. He and I were together for over 13 years, he was also a friend before he was my boyfriend/husband and to have him betray me like that and treat me as he had was awful.

He married his affair partner. They had a daughter within months of our separation, followed by a son after the divorce/their marriage. Last year they lost a baby which led to the discovery that his wife had cancer.

What followed was a lot of fighting between the two of us again. He wanted me to help him and his wife out. He said their children (who are currently 5 and 3) needed family beyond just him and his wife. His own family disowned him for our divorce (they were extremely religious) and she has no family. I told him it would be over my dead body I would help him. He argued that it was for the children and if not for his kids with her, then for our boys, who could see their family heal and be one. I told him he stopped any chance of that happening when he cheated on me.

What I did not expect was for him to tell his daughter’s school to call me when she got sick. He was at work at the time and couldn’t leave apparently because he had already missed a lot of work due to his wife, and she was home recovering from chemo. I got the call, was asked if I would pick her up and I said no. Several hours later I got reamed on the phone by him for leaving his sick child at school when I knew they had nobody. This is when he told me how he couldn’t leave and how his wife was resting. I told him the babysitter for his son should have been called over me. He told me he was in daycare and I should be fucking ashamed because she was a sick child who is going through a lot and I could have helped. He told me he hoped our son’s were going to be fucking ashamed of me. They aren’t. And I argued back with him over the phone at the time.

But I guess part of me does feel bad for the child. My son’s also sensed an atmosphere while they were with their dad after the incident when they talked about me, and I hate that for them.

Redditors deemed OP “Not The A-hole,” and shared some advice on what she should do next