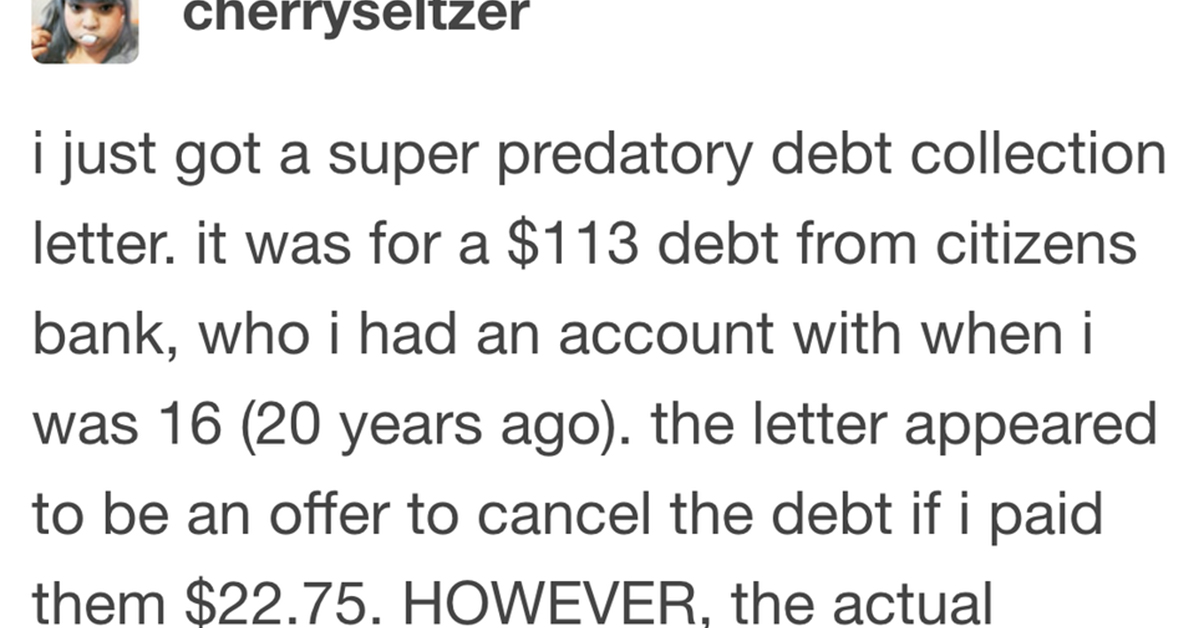 The best thing to do with phone calls from debt collectors is to ignore them.

Most of them end up being spam or scams anyway, and if they really want to reach you, they can send a letter.

But when that letter comes, it’s important to read it very carefully.

Debt collection — like too many things — is far more complicated than one would hope, and trying to do the right thing could actually get you in more hot water in the long run.

An old Tumblr post is making the rounds again, serving as a perfect example of what kind of debt collection letter to just toss right in the trash.

When a debt goes to collections, predatory companies will buy the original debt off the lender for pennies on the dollar. Then, they will often offer to accept a smaller amount after some time has passed, in the hopes they can get anything from it at all.

Sometimes, this can work in your favor, but you have to be very clear on the terms.

In this case, paying that $22.75 would have been a really bad idea.

“At the bottom of the letter, it says ‘Because of the age of your debt, we cannot sue you for it and we cannot report to any credit reporting agency.

In many circumstances, you can renew the debt and start the time period for the filing of a lawsuit against you if you take specific actions such as making payments on the debt or making a written promise to pay.’” she adds.

In other words, as cherryseltzer explains in her post, paying any money at all would actually revive the debt and allow the company to file a lawsuit for the remaining amount.

But because the debt is so old, if it’s simply ignored, nothing can be done.

“No thanks, Jefferson Capital Systems LLC,” she concludes.

Reading up on debt to understand your obligations is one of the least fun things you could possibly do with your time, but it’s one of those situations where a headache now could save you a much bigger one in the future.

But either way, read those letters very, very carefully, and keep your wallet closed.