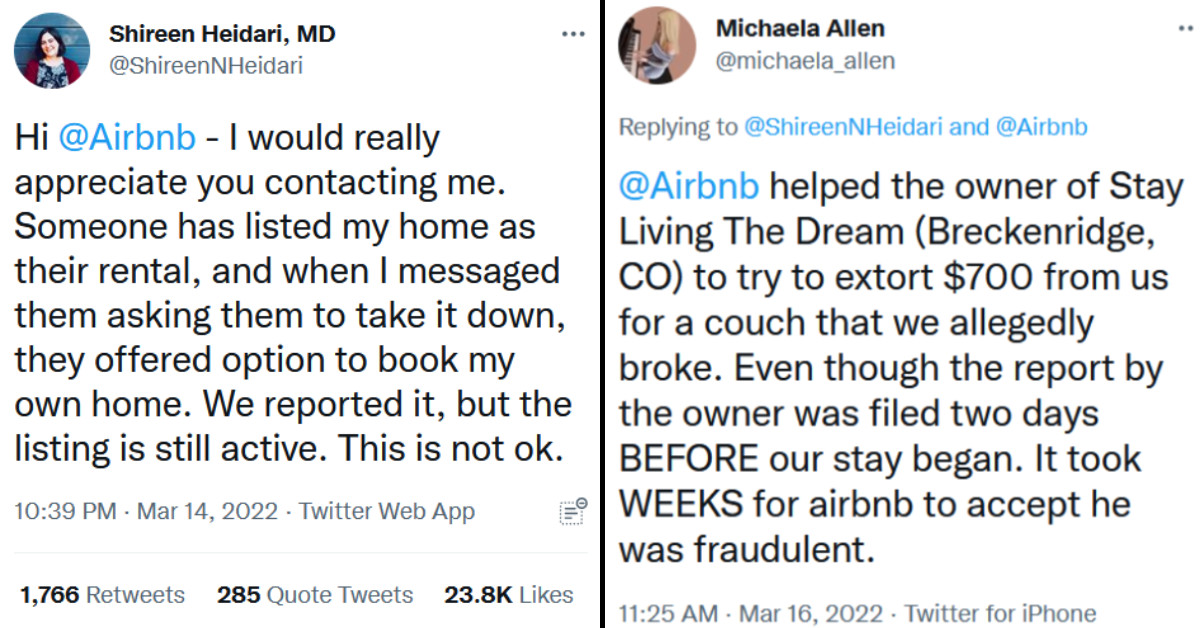 Is it just me or has AirBNB kinda stopped being as useful as it once was?

The following thread confirms that it is, not in fact, just me.

A doctor at the Stanford Department of Medicine in California was surprised one day to learn that her home had been listed as an Airbnb rental by some random person without her knowledge and had to take to Twitter to get the company to remove the listing.

After messaging the person who listed her home as a rental, they responded only by asking if she wanted to rent out the place she owns and lives in, and Airbnb lived up to its terrible customer service reputation.

“Hi @Airbnb,” she tweeted. “I would really appreciate you contacting me. Someone has listed my home as their rental, and when I messaged them asking them to take it down, they offered the option to book my own home. We reported it, but the listing is still active. This is not ok.”

The listing was taken down after Dr. Shireen Heidari stayed up late on the phone with a customer service agent and provided proof that she owned her home.

It also likely helped that people were reporting the listing as fraudulent after her initial tweet went viral.

Of course, something like this never should have happened in the first place. Imagine minding your own business and suddenly people are trying to rent out the house you own because some rando put it up on Airbnb as though that would somehow work out for them.

This is not the first time people have had serious issues with Airbnb, and the company has been accused of using shady business practices, screwing people over, and generally making the affordable housing crisis in the U.S. even worse. It speaks volumes that so many people are so eager to trash the company and jumped at the chance to share their own Airbnb horror stories, including those who experienced something very similar to the unnecessary nightmare Dr. Heidari went through.