Brands are always trying to make us think they’re people. There are real people behind brand voices, and maybe that’s why they mess this process up so much. People make mistakes. And Boston Market’s decision to jump on a trending Twitter joke was definitely a mistake.

The problem that cropped up came from their attempt to participate in a game where people offered two images: one of a couple about to get frisky, and one of whatever. The question that accompanies them is usually some variation on “what can you say to both.” In Boston Market’s case, that whatever was a roasted chicken.

“What’s something you can say to both your rotisserie chicken and to your significant other,” asked Boston Market, starting a truly cursed reply thread.

what’s something you can say to both your rotisserie chicken and to your significant other pic.twitter.com/fgCTqzGUWi

The responses are pretty horrifying and include a lot of references to skin being ripped off, dismemberment, and roasting your beloved on a stick. Whoever was on the other end of Boston Market’s Twitter account had a lot to navigate, and they gamely tried to respond as “appropriately” as possible.

how you know it’s real

But there were some tweets the rotisserie giant couldn’t even respond to, and they started hiding the most horrific replies, to the disappointment of several followers:

Wow and they’re hiding everyone that replies with the same criticism. Madness.

But one tweet takes the cake for horrifying replies and it seems as though it had been deleted by Twitter for violating rules about human decency. I guess Twitter steps in for brands!

Thankfully, Ebaum’s World captured the awful images before they disappeared, but reader beware: though things are blurred out, they paint a vivid mental picture: 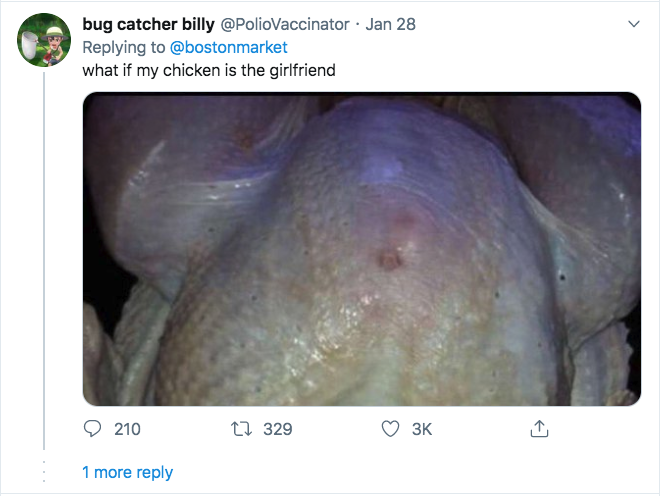