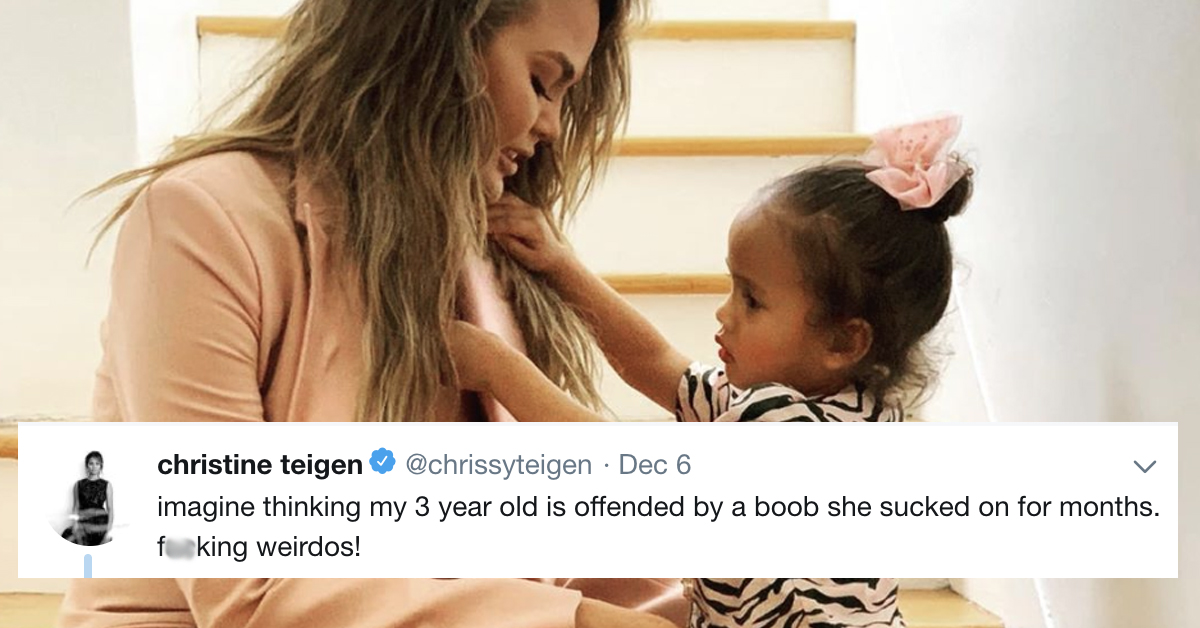 Chrissy Teigen’s Twitter account is a gift. She’s prolific, hysterical, and occasionally inspirational despite calling herself a “de-motivational speaker.” 2019 had Teigen warring with the President, defending her breasts, trolling her husband John Legend more than once, screaming at technology, and being refreshingly honest about the trials of parenting—among other things. We made a list of Chrissy Teigen’s funniest tweets of 2019, so get ready to revisit the year in Chrissy Teigen Twitter.

1. The time she called President Trump a “pussy ass bitch.”

lol what a pussy ass bitch. tagged everyone but me. an honor, mister president.

2. When she went above and beyond to share her favorite beauty products.

Me, wearing face mask. Flight attendant: “are you gonna be like this all night?” Me: “yes!! It’s the best mask ever. From Korea. Collagen! Ugh it’s called….Let me get the package out of the trash so you can see ok one sec” flight attendant: “no I just mean like, awake”

3. When she was upfront about friendship anxiety.

I’m scared to become friends with @AOC and have her even ask me why I was late. I’m crumbling

4. When she said what we’ve always wondered but were too embarrassed to ask.

just took a probiotic and an antibiotic. does this mean I am taking…nothing?

5. The time she told someone their brother had sex with peanut butter.

I’m scared to become friends with @AOC and have her even ask me why I was late. I’m crumbling

6. That time she maybe didn’t give her parents enough credit.

the sexiest man alive just made me a ham sandwich

I cannot WAIT for people to get mad about John being the sexiest man alive. it’s my new Starbucks holiday cup

9. And then quickly deconstructed it.

sexiest man title has been a curse upon my family @jimmyfallon pic.twitter.com/15QEbyBuoW

10. When she was the spokesperson for a product she didn’t entirely know how to use.

did a whole google campaign and really use this thing ever day. never once was a told there was a volume button on the side pic.twitter.com/83vRyawmIH