When John Legend was announced as People‘s “Sexiest Man Alive” for 2019, perhaps no one was more excited than his wife Chrissy Teigen. 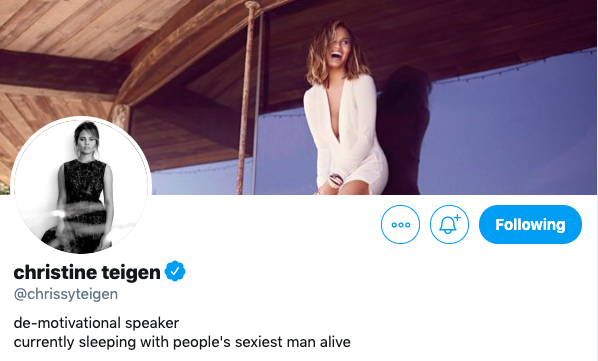 But was John always as sexy as he is today? Maybe not—at least according to his own words. He compared a pic of himself in 1995 to 2018’s “Sexiest Man Alive,” Idris Elba.

1995 John would be very perplexed to be following 2018 @IdrisElba as #SexiestManAlive. Hell, 2019 John is about as equally perplexed but thank you @People for finding me sexy. I’ll take it 🤓 pic.twitter.com/Gw1la5Ebv4

“1995 John would be very perplexed to be following 2018 @IdrisElba as #SexiestManAlive. Hell, 2019 John is about as equally perplexed but thank you @People for finding me sexy. I’ll take it,” he tweeted.

Teigen wouldn’t let her husband be so down on himself—kind of. The model, actress, and cookbook author issued a good-natured challenge: Idris Elba, show us a picture of yourself from 1995.

Lo and behold, Elba came through. He replied to Teigen’s tweet with a shot of himself “1995-ish” that shows the British actor has pretty much been hot since, well, forever? Seriously, it’s soul-selling levels of spooky.

“I was excited, but I was a little scared at the same time because it’s a lot of pressure. Everyone’s going to be picking me apart to see if I’m sexy enough to hold this title,” the award-winning singer and songwriter said. “I’m [also] following Idris Elba, which is not fair and is not nice to me.”

It was only fitting that folks on social media would have fun exploiting this poor man’s anxiety.

Celebrities! They’re just like you and me! Arguing over who was hotter before People magazine said so! It’s very relatable.