Just a short while ago Donald Trump tweeted this photo of himself with the following caption: 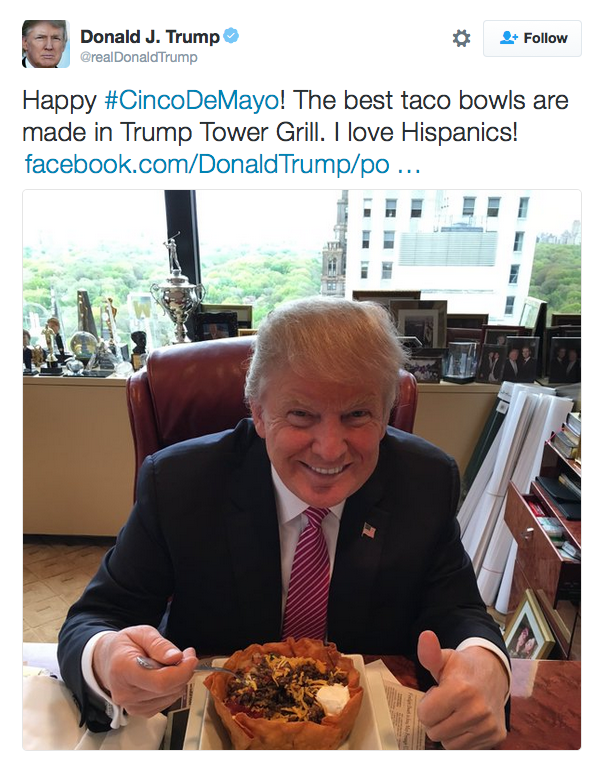 For some Donald Trump-esque reason, he doesn’t see anything wrong with it. Luckily for the rest of us, the people of Twitter do and their responses have been hilariously amazing. Let’s take a look at just a few to pop up in recent moments:

.@realDonaldTrump Any day is a great day for pho soup. I love Asians! pic.twitter.com/bB1S93E7BA

. @realdonaldtrump I know you are celebrating your big win but this is a little much… pic.twitter.com/WtURdpYKgB

Trump wants to build a wall to keep Mexicans out but the wall has a slot that they can still give us tacos through?https://t.co/v0dj29KYTB

Tune in tomorrow when Trump has pancakes with Aunt Jemima syrup and declares I LOVE THE BLACKS! https://t.co/o7n7db2Gqa

It’s Holocaust Remembrance Day today too so I’m really looking forward to Donald Trump tweeting a picture of himself eating a bagel!

This is going to offend a lot of people. There’s NO WAY Trump Tower Grill makes the best taco bowls. #CindoDeMayo https://t.co/aoBdYMEPMf

Oh cool, he took taco meat and built a little wall around it. pic.twitter.com/AmR5oncVFv

This whole Donald Trump Taco Bowl tweet storm is all just getting started, so I’m sure we’ve got plenty of more hilarity to look forward to.

And if you need more funny tweets in your life, be sure to check out The Funniest Tweets of the Week.