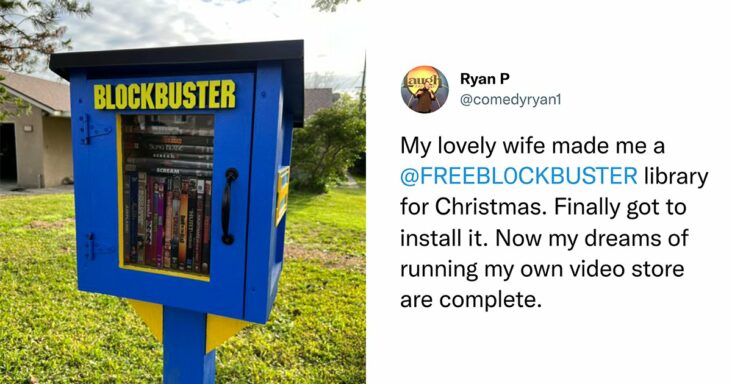 You might have seen free library boxes around your neighborhood, but a free Blockbuster box?

That’s what Twitter user Ryan P (@comedyryan1) received as a surprise Christmas gift from his wife. Check it out:

Now he can charge all the late fees he wants!

The box comes from a group called FreeBlockBuster.org, which made them to provide free movies, similar to how those free libraries do with books.

On its website, the group describes its purpose: “Our mission is to combat the myth of scarcity by providing free entertainment to as many people as possible.”

They launched their first location in 2019, after a former Blockbuster employee imagined a way to breath new life into abandoned newspaper dispensers.

Ryan said the group sent his wife a kit and she did the rest.

The internet loved the concept of a free Blockbuster box. Some had ideas of their own to improve the experience.

Others wondered if anyone had helped themselves to some movies. Ryan responded that he hadn’t yet had any customers.

Blockbuster, of course, was a cultural behemoth in the 90s — with its locations seemingly everywhere. But as the years passed, it was no match for streaming services like Netflix.

By 2013, most of the company’s stores had closed, but there’s still one remaining location in Oregon that’s still open.

Good luck to Ryan and his new retro adventure!