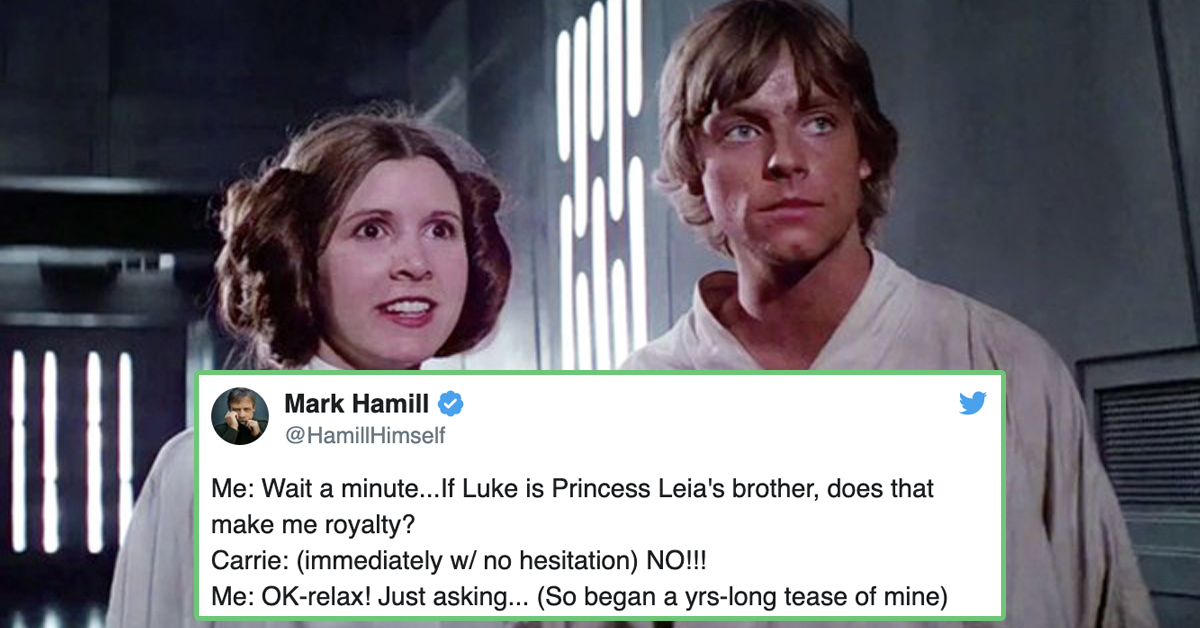 Mark Hamill is a force to be reckoned with. (Sorry.) Hamill, Star Wars hero who played Luke Skywalker, is vocal on social media, particularly Twitter, where he often mixes it up with his views on politics and pop culture. Something he also does is wade in to confirm or deny factual claims about Star Wars with supreme authority. From Star Wars trivia to private moments on set during the making of the films, few people know more about Star Wars than the man who starred in so many of the films and has spent the decades since answering innumerable questions about them.

Here’s a selection of Star Wars facts and trivia, as told by Mark Hamill himself.

1. The time he confirmed that there is underwear in space

That was the t-shirt I wore under my #EmpireStrikesBack uniform. It was strategically torn to match the damaged jacket so you would see skin & not the t-shirt. These pictures were suppressed for years because George said: “There’s no underwear in space.” Seriously.🤣#TrueStory https://t.co/3pl1VzN2ib

2. He once stood in for his own prop-head

It was my head protruding through an opening in the set floor as I stood below-My prop head was tested but rejected. https://t.co/10mUunERWB

3. The “blue milk” on Tatooine almost made him hurl

Blue milk was “Long Life” milk (used by campers because no refrigeration is needed) w/ blue food coloring. Oily, warm & slightly sweet, it literally made me gag, but I was determined to drink it on-camera. It was an acting challenge to appear as though I enjoyed it. 🤢 #TrueStory https://t.co/L9XNJXxsU7

4. His bad joke to George Lucas got him dunked in the trash compactor

“Pardon me George, could this be Dia Noga poo-poo?”🎶#TrueStory https://t.co/mSAWCQ0fMd

5. Sometimes his earpiece picked up radio transmissions during his scenes with Yoda

I wore a small ear-piece to hear @TheFrankOzJam speaking. Occasionally I’d pickup radio signals & instead of his dialogue I’d hear The Rolling Stones’ Fool To Cry🎶or other pop singles. I learned to ignore that & wait for Yoda’s lips to stop moving to cue my next line. #TrueStory https://t.co/8bbUV9uTXx

Because of a record heatwave in England when we filmed the original #StarWars, most of the pilots wore only the top-half of their costume, attacking the Death Star wearing shorts. #TrueStory https://t.co/RSgZRneft9

8. The character he really wanted to play was… Darth Vader

I didn’t get to read the whole script until AFTER I got the job. When I finished reading it, I wished I was taller because Vader was my favorite character. Scary AND cool. Why do we always want things we can’t have?

9. Lucas used to tell the actors on set that Star Wars was “only a movie.” How things have changed…

Whenever Harrison, Carrie & I would argue about something in a scene, George would tell us: “It’s only a movie.”
Watching this man’s reaction reminds me that to countless fans around the world, it’s much, much more than we ever dreamed it was. #UltraPassionateFan 😍 https://t.co/0pfilI1nRl

10. Sometimes when he was lonely Hamill would come to the Star Wars just to hang out.

I was single, living in a 1-room flat in London during the original movie. I’m in street-clothes since I wasn’t working, but would come to the studio anyway, to watch them film, hang-out w/ friends & on this day in particular-have lunch w/ 1 of my idols: Peter Cushing! #TrueStory https://t.co/oMzUiJIHf7