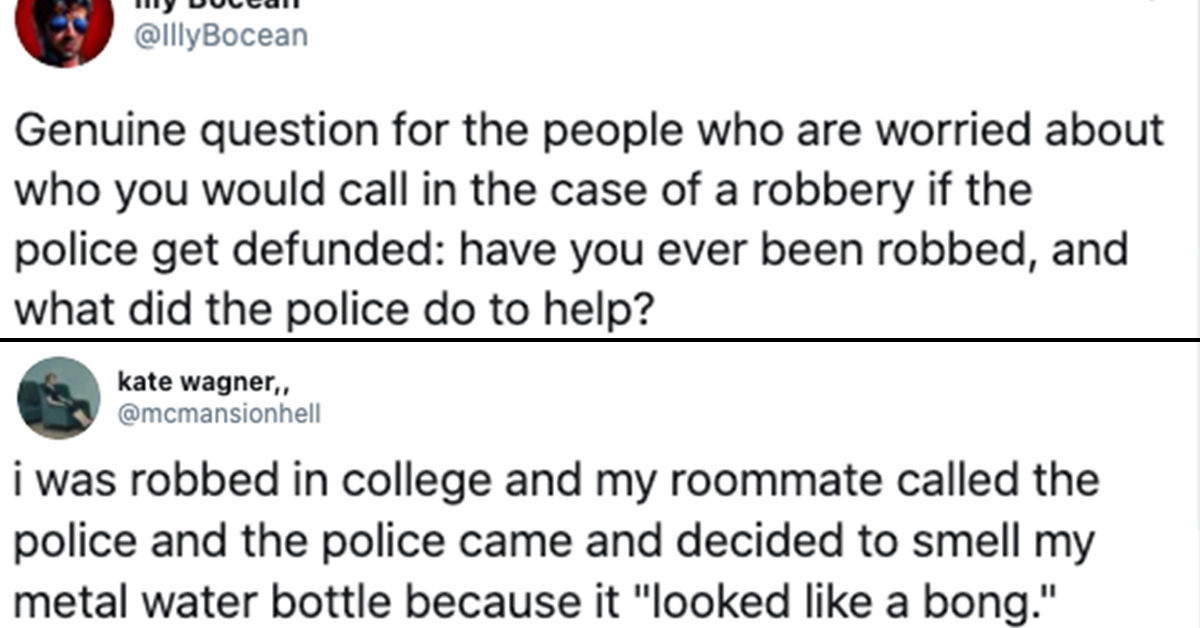 Right now, people are discussing what it means to “defund the police.” This isn’t a new idea at all, actually; many activists have discussed what a world without police could look like for decades. In most cities, police forces take more of the city budget than most social services combined, and with much less to show for it.

But many people are struggling with the idea of who would do certain things in an emergency. For example, who do you call if you get robbed? Now, we call the police. And what do they do?

Podcaster Illy Bocean decided to do an informal Twitter open forum on what exactly even happens when someone is robbed and tries to call the police to report it or get help:

Genuine question for the people who are worried about who you would call in the case of a robbery if the police get defunded: have you ever been robbed, and what did the police do to help?

They shared their own story about a repeated robbery in their apartment complex and how ineffective the police were in addressing it:

And that’s the reaction for middle class white people! Imagine if you were in a demographic that they not only don’t care about, but feel actively hostile towards?

I hope it’s clear here that the point isn’t that I want cops to more effectively imprison people for petty theft – it’s just clear that the only role they’re playing here is passing a note to your insurance company, and I feel like people without guns could manage that just fine

And once they opened the floor, the stories came rolling in from other people who (for the most part) didn’t get much help with solving crimes from police officers at any point in their robbery process.

So, if the police aren’t doing anything about robberies, what are they doing? Maybe not anything they should be paid for.

My car was broken into inside our locked car park…windows smashed. Called police and they said to come down and they’d give me a letter for insurance. They told me they don’t attend car break ins.

And in my last apartment, threatened by a neighbour with a claw hammer. Police came, told me they couldn’t get an AVO on that because I wasn’t harmed and advised me to move.

Rented a house a ways out of town. The MAGA neighbor hated my dog, a little corgi/pit bull mix. Threatened to shoot him all the time.

Finally shot him in the middle of the road and carried him back to his property and buried him in a snow bank.

“someone’s needs my help? i smell opportunity to throw them in prison”

I once saw an off duty local cop get in a bar fight with a very drunk off duty US Marshall. So much lolz when they each realized that the other one was also a cop. pic.twitter.com/vRZNpE9niR

for the record, this is physically impossible barring the heat death of the universe, and even then, the windows would not implode and suck all the broken glass back into the car

ripped from hinges. Would have been scary to be home. I reported it. Police dusted for fingerprints on the window, didn’t locate stolen goods. I regret calling and would take it back if I could. I got nothing from it and had no control over what they would do with my report.

The cops made fun of my for having something stolen too.

spoiler: it was not a drug deal

Yep, I distinctly remember when someone broke into the car and nicked my laptop, CDs and discman and I phoned the police and they literally said “sorry we can’t help with that”.

Same. My hubcaps were stolen, “oh, yeah, that’s happening a lot lately, probably park your car inside.”
Me: “I live in an apartment.”
Cop: “Well that sucks, haha.”