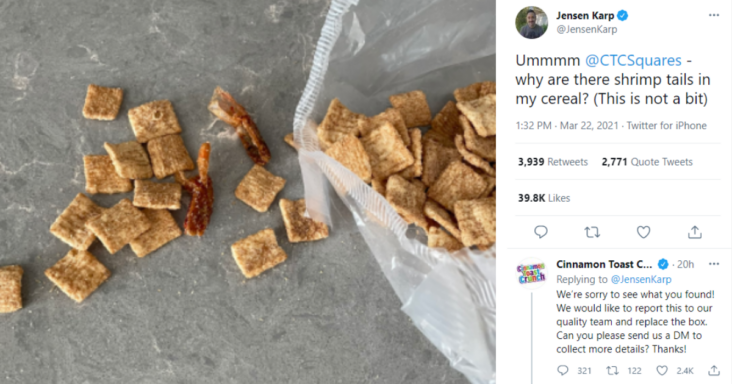 Recently, we told you how everyone who buys ground coffee is 100 percent eating cockroaches, now we have some bad news about Cinnamon Toast Crunch.

Remember, WE ARE JUST THE MESSENGER.

This week, writer and podcaster Jensen Karp uploaded an image to Twitter of what he found in his box of Cinnamon Toast Crunch—shrimp tails.

Yes, shrimp. The little crustaceans that aren’t found as any boxed-cereal ingredient that we are aware of.

Welp, there they are. What appears to be little shrimp tails coated in cinnamon, guaranteed to give Karp a crunch. Not the one he paid for, though.

The tweet went viral, receiving 39.3K likes as of this writing.

Karp even showed off his elaborate system to prevent others from eating out of the box.

Many people accused Karp of making up the story.

Karp reassured everyone he felt fine after ingesting the questionable cereal, and said he called poison control and would be getting it tested.

Since the cereal came in a family pack, his wife checked the other bag and found… dental floss??

Word quickly got to Cinnamon Toast Crunch’s social media manager, who gathered the details, and…

Said it was just ACCUMULATED SUGAR.

Yeah, those are definitely lil shrimps.

They also tried to offer Karp another box.

But seriously, this is a question we all want to know. WHERE DID THE SHRIMP COME FROM??

Phil may have the answer.

As word spread through the internet, it was only a matter of time before the cinnamon toast shrimp tails turned into memes.

Many people vowed to never buy Cinnamon Toast Crunch again. But you know what? Billy brings up a good point.

Now we know math is on our side, nothing — not even shrimp tails — can come between us and our Cinnamon Toast Crunch.