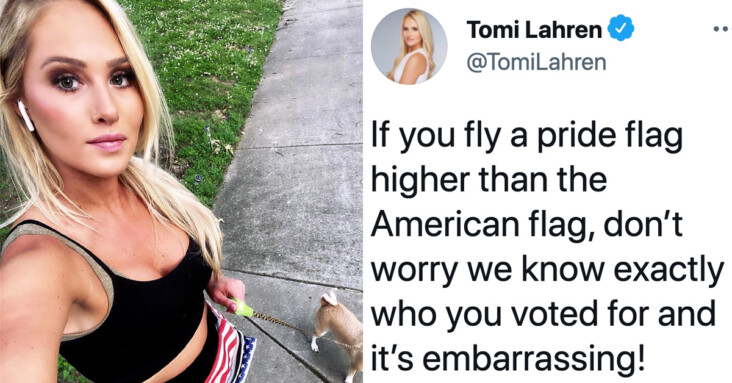 Though Tomi Lahren has repeatedly claimed to have “no issue with LGBT people,” like many modern conservatives, she finds more insidious ways to let us know that actually, she really does.

Supporting the party that wants to strip away LGBTQ rights and prioritize religious discrimination sends the message loud and clear as it is, but Lahren wanted to take Pride month as an opportunity to shame the gays with just enough plausible deniability that she could theoretically claim she’s just being patriotic, actually.

“If you fly a pride flag higher than the American flag, don’t worry we know exactly who you voted for and it’s embarrassing!” she wrote on Twitter over the weekend.

While there are technically rules of some sort when it comes to the American flag, even someone unfamiliar with them could tell you that they are largely broken by the majority of Americans. Otherwise, we wouldn’t see American flags used for advertising, or on the hood of a car, or worn in any manner.

In other words, conservatives would almost certainly be the majority of the rule breakers when it comes to flag code.

That was among the many things people pointed out in response to Lahren’s tweet, which was clearly designed simply to push an anti-LGBTQ, anti-Joe Biden narrative and appeal to her homophobic fan base without completely ostracizing those rare conservatives who aren’t.

Here are some of the best responses: