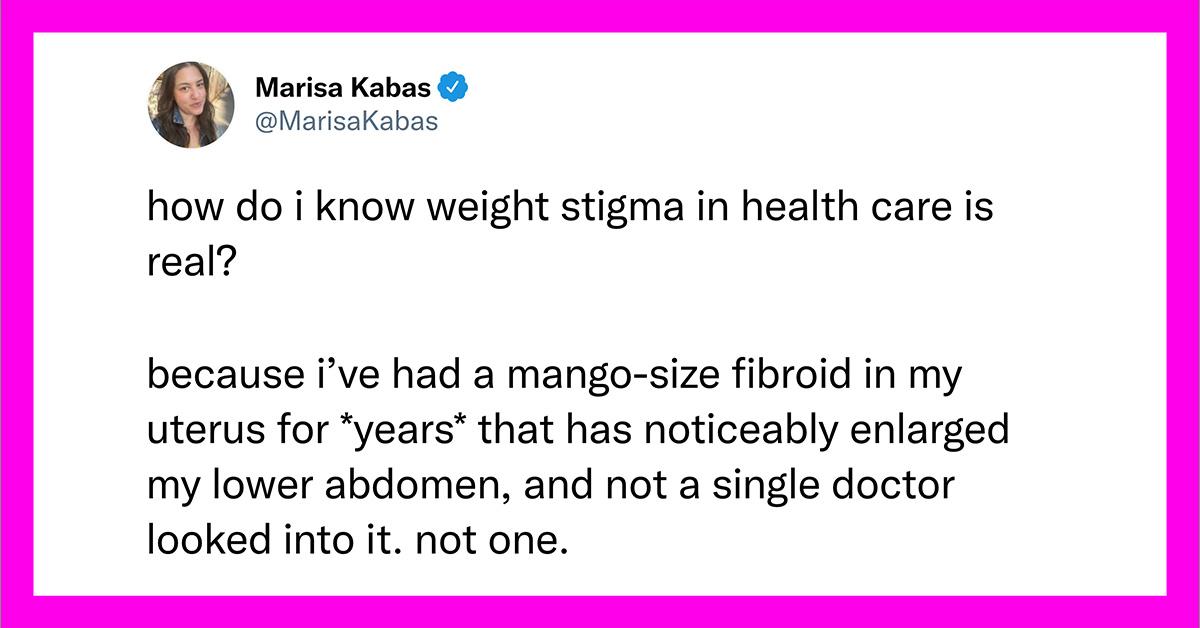 It’s no secret that we have a flawed healthcare system here in America, and this thread was published by writer Marisa Kabas reveals a less discussed stigma in health care. And that is the weight stigma.

In her eye-opening Twitter thread she discusses her own experience with a doctor(s) who ignored a serious threat to her health. What was a mango-sized fibroid in her uterus went undiscovered for years because doctors whose only diagnosis was that she was overweight. 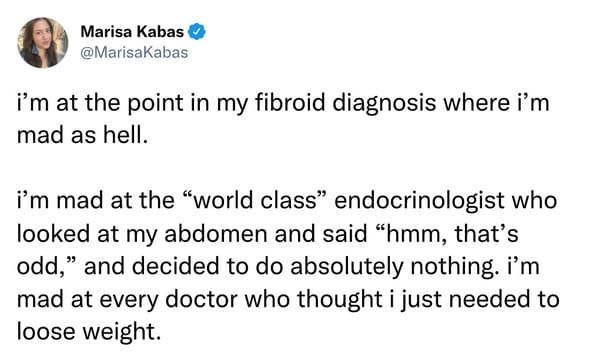 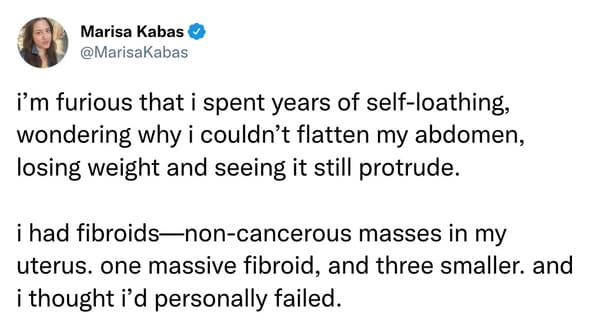 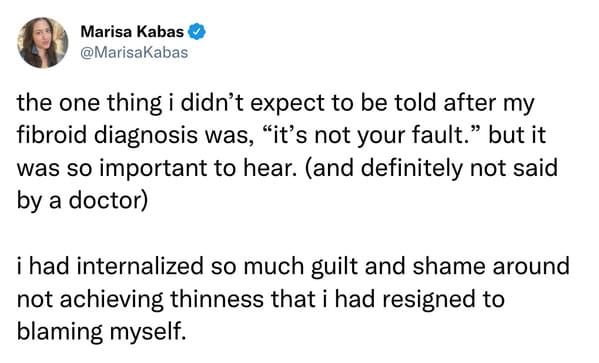 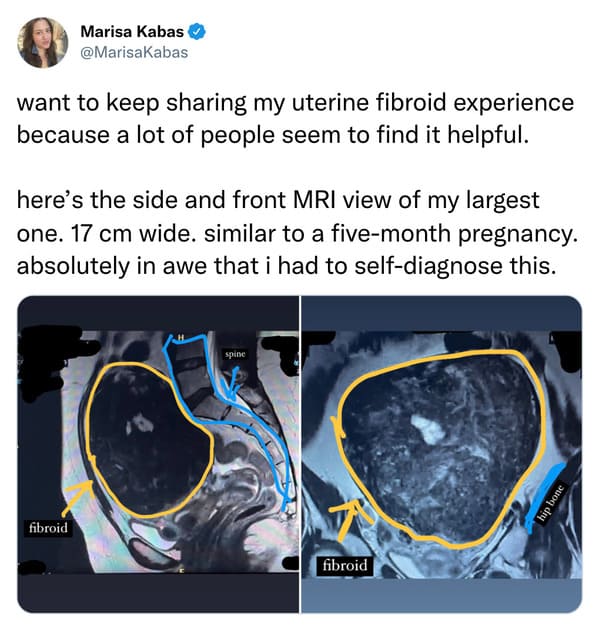 The viral thread sparked many reactions from women on Twitter who’ve also experienced this first-hand.

The transvaginal ultrasound when it was so bad I needed a transfusion (the ultrasound to “find” the problem) felt like assault as the tech scoffed and called me a wimp for crying in pain . They were also female.

Nevermind that kids and adults experience and express pain differently. Especially those who are neurodiverse, have connective tissue disorders, or have neither of those things.

This happened to my cousin maybe 20 years ago. She won a malpractice lawsuit against the doctor. If you hadn’t considered suing, you should. It’s really the only recourse we have to accountability. (This all assumes you’re in the US.)

Oh Jayce, I hope you’re on your way to a full recovery and how sad that it took so long to be diagnosed. It shouldn’t be like this. You are a warrior.

…“some women just have painful periods”, lack of libido gets advice like “relax” and “show some interest” rather than looking at a hormone issue for which there are hormones… Men get Viagra. Women get shrugged at.

My previous GP ignored my suggestion of fibro for nearly 10 years. I’m a former nurse. I know what the symptoms are. Still no help from him. Moved away and my new NP sent me to a rheumatologist and guess what? I have fibro.

I was in so much pain, and after 4 days went to get it looked at by a sports chiropractor who actually listened and took my pain seriously. He spent 4 weeks scraping my ribs back into place (ow). At that point there was no way to put them back into place without them breaking.

I'm 38 years old, and the PP clinic I used in my 20s is the best care I've received anywhere.

The idea that I have to have my husband’s input and STILL have a doctor reject a very reasonable request, was so stunning.

I also have hashimotos disease, and I constantly get the “just lose weight” from doctors like I don’t have a medical issue making that harder.

I'm so sorry. This happened to a friend of mine, as well. She had several grapefruit-sized fibroids, and no one did anything for years because they insisted it was somehow related to her weight. I hope you get better care in the future.

sounds a lot like the one who told me "there's no such test" when Iasked for a full vitamin panel. Even after I told her that my previous year had been a really bad one & for about 4 mos I was only eating about 750 calories a day & I was worried I was deficient in several even +

A smirk and a giggle. I have an urge to “recreationally” reach down his throat to grab his nads and squeeze.

Too many people who never should have graduated med school have been unleashed among us.

I’m sorry this happened to you. This mirrors a lot of my experiences. They missed that I had kidney stones til I ended in hospital on excruciating pain. Despite complaining of pain for years. After decades of hormonal tests, I was just told I have low testosterone.

…with a medical crisis while in BC that she was diagnosed with fibroids and a cyst on each ovary, one larger than a grapefruit. The ER doctor called her doctor, gave her shit had told her to make an appointment with an ob-gyn immediately and reported her.

I've changed up my diet completely, I'm way more active than ever, I'm 220 pounds of mostly muscle with a jiggly belly. And you're gonna tell me I'm fucking fat when I'm in here with excruciating pain over a GENETIC DISEASE!?

Next doctor that says this shit to me gets cussed out

yep, 3 trips to the emergency room for me and as soon as it was confirmed not appendicitis i was also told "its nothing" or "probably gas" with a smirk. and im tired of the only answer ever being BC because hormones that just mask the problem are not it