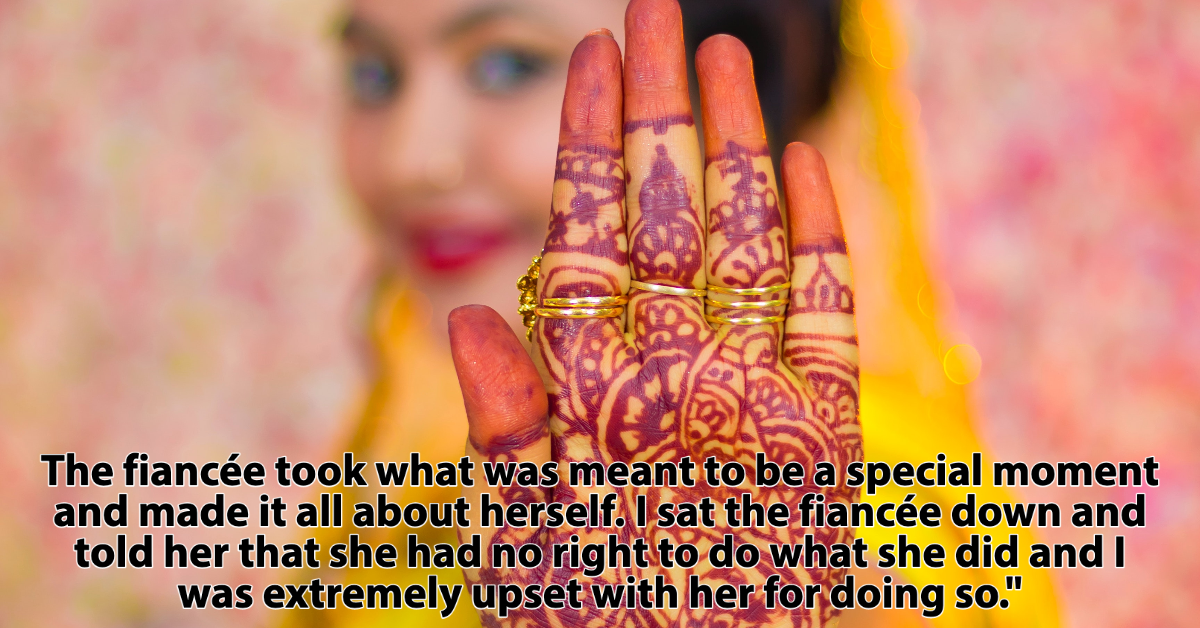 At weddings celebrated by all different cultures, there are special roles given to people who are meaningful to the bride and groom. Sometimes, family members get angry if they are not chosen or if they feel slighted in any way — as if the event was all about them.

But one Redditor who was recently married in a traditional Punjabi wedding now has to deal with a cousin’s fiancee who ruined one of the ceremonies and made everything all about herself. It’s a tricky situation, as lots of family members are involved and invested.

“I (26F) recently just got married a few days ago. It was a traditional Punjabi wedding and I had an absolute blast. For some context, I have 3 brothers and no sisters. In traditional Indian weddings, there are certain ceremonies where you would need your female relatives to be a part of. Since I have no sisters, my cousins stepped in. My families have always had a strained relationship with one another, always due to some petty fights that occurred years ago that some of the relatives just can’t let go of. Most of the cousins don’t partake in this because we’re aware that it’s ridiculous,” the OP writes.

“I have one cousin I’ll name X (18F) who is extremely nice but unfortunately super shy and timid. She has always been like this and most of us have just grown up being protective of her, especially since she is one of the youngest cousins. During one of these ceremonies, I insisted that my cousin be a main part of it because I know she would genuinely enjoy it but would be too shy to volunteer herself or ask for it. One of my cousins fiancée’s (28F) however, is quite the opposite. She constantly likes to put herself in the middle of everything, despite already being told of her given duties during the ceremony.”

“This is the part where I may be the a*shole. During one of the ceremonies, you are supposed to have one of your female relatives sit behind you on stage and basically just take care of you, fix your hair or your clothes etc. I specifically told cousin X that she would be the one to do this for me. However, when the day came, my cousin’s fiancée was the one who took her spot. I was confused but could not do much. After the ceremony, I found cousin X and she explained to me that the fiancee who took her spot had basically scolded her and yelled at her, saying that she should be the one doing it since cousin X is still young and doesn’t know anything. She then told cousin X to go sit down with the other guests, despite cousin X’s protests. Cousin X’s mother (my aunty who I absolutely adore and has been a huge help with the wedding) was quite upset with this but did not want to cause a scene and just told cousin X it’s okay.”

“When I heard this, I was furious. The fiancée took what was meant to be a special moment and made it all about herself. I sat the fiancée down and told her that she had no right to do what she did and I was extremely upset with her for doing so. Apparently she was so upset by this conversation, she refused to come for the other ceremonies the next day. I was fine with this, because I generally don’t like adults who throw temper tantrums but my cousin says that I had no right to speak to his fiancée like that and now his entire family has been constantly saying a lot of negative things about my family and the whole situation.”

The OP added an update about some crazy stuff that is continuing to happen:

“Just got a call from my photographer. A woman called him from an unknown number and said she would pay him twice the amount of money I paid him if he deleted all of my wedding photos and told me that the memory card got corrupted. I honestly do not even know what is wrong with this woman, and why on earth my cousin would even consider marrying her.”

Yikes. What do Redditors think?

“NTA. Man a Desi wedding is not complete until all the relatives are mad at each other. I hope you had a really nice wedding. And that cousin X was able to help you out in other ways,” said

“NTA. I would respond to the people that are giving you and your cousin crap about it with this: ‘This moment was meant for a close female relative, as is tradition. Cousin’s fiancée is not a female relative because she hasn’t married him yet. She inserted herself into our family despite not being an official member. If she and cousin had already been married, I would have considered her for the role, but due to her being unmarried I felt it went against our traditions.’ Usually, someone making an argument/defense like above pisses me off, but she and the rest of her defenders are so out of line that I’m more pissed at them on your behalf. If her family and your family are very into traditions making it about her violating them might help you gain traction against them. Also, grown ass woman bullied someone 10 years younger than her to get her way and get some attention on herself. Some of your family is supporting a bully rather than calling her on it. Another way to respond is: ‘At least I was trying to follow tradition, unlike her,” advised

“NTA you taught her the very useful lesson that some people will stand up for her nonsense, and you showed your cousin how important she is to you. Anyone else who’s mad at you would find some other grievance,” said

“This is some Bollywood Indian soap opera type sh*t. That woman sounds unhinged and your cousin is too for putting up with her,” said