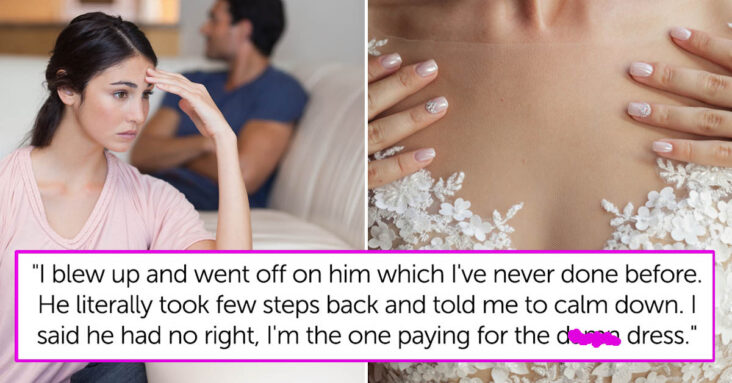 Weddings are all about the dress. Or at least they mean a lot to a bride, which, following the laws of supply and demand, means they can be expensive.

As important as they are though, what happens if you and your partner can’t agree on a wedding dress budget?

Read also: Woman Asks If She’s A Jerk For Not Letting Her Cousin Borrow Her Wedding Dress

Redditor u/Sealine5033  is having this problem — she purchased the dress of her dreams, but apparently, her soon-to-be husband returned it, so she wonders:

“Me (f29) and my STBH [soon-to-be-husband] (m33) are getting married soon. Wedding planning has so far been going alright except for few things he and I argued about like the venue and flower girl. Now we’ve been arguing about my wedding dress, This might sound clichè but ever since I was young I dreamed of having my own beautiful wedding dress, I can afford it but my STBH thinks it’s not okay to waste a couple of thousands on a dress I’m only going to wear once — yes he might have a point there but for one, this is typical price for wedding dresses and two, because it’s a once in a life time thing then why not make sure it’s special?”

“STBH still wasn’t convinced, and suggested I rent a dress instead of buying one. He started saying that I’m being irresponsible with money and brought up how much money I’ve already put aside to ‘rent a face’ (he means makeup) and wear ‘fake’ hair (he means extension) but I have this vision of what I want to…look like, sort of speak, on my wedding and I think that it’s my right as a bride. I went ahead and purchased the dress but a day later I found out that it was missing from my closet. I freaked out but he told me he returned it and got the money back. I was shocked I asked him why he did that and he said he thought the dress was ridiculously expensive and that was wasting money and AGAIN suggested I go rent one.”

“I blew up and went off on him which I’ve never done before. He literally took few steps back and told me to calm down. I said he had no right, I’m the one paying for the damn dress. He got upset and said that there’s no ‘I’m paying for it myself’ in marriage and that my attitude is setting the tone for what type of dynamic we’ll have in our marriage, he kept on about how I must expect to him to pay for everything while I keep “my money” or spend it irresponsibly (but I never tell him how to spend his money) I responded that he gets zero say in how I spend my money whatsoever. he told me that I should grow the f up and stop with the ‘dream wedding dress’ clichè then stormed off to call his mom who chewed me out saying she won’t let me ruin her son’s financial stability with how I deal with money generally. She too urged me to rent a dress or buy cheaper one, way cheaper than the one I picked and move on but I declined.”

What did Redditors think?

“NTA. But please, hold, pause, press the button. There are some serious red flags here that you need to look into more closely before you get married. You had a disagreement. You and he are obviously on two sides of this issue, but he took it upon himself to force his solution to the situation. That is problematic. Where is the money that he got back on the dress? Was it returned to a credit card? Is it your credit card? Was it cash? If so where is the money? This is important to establish. You said that you spent your own money on this dress. Has he taken that money for himself? Has it gone back to a joint account? Important information for you to have. His mother has put herself in the middle of this argument, not unsurprisingly on the side of her baby. Does she often do this? Do you want to live the rest of your life with her interfering from outside in disagreements that belong squarely within the circle of your household? I am begging you. Look into this more deeply. Do not sweep this under the rug. I know we are taught that marriage is the end all and be all for women, but please do not rush into past indicators that this marriage might be a very pretty trap for you,” said

“Maybe the theme of the wedding is Red Flags. The bridesmaids will wear red. The groom will have a red suit. And the aisle will be lined with increasingly big red flags until she reaches the altar which is actually just a tent made of one giant red flag. Personally, I think she should call the cops on the man who stole several thousand dollars from her instead of marrying him, but that’s just me,” noted

“OP do you not hear how denigrating he is being? Calling makeup ‘renting a face?’ He is belittling you and putting you down in the lead up to something that should be joyful and where he celebrates you as a person. This type of behavior escalates. If he is doing this BEFORE you get married, imagine it 10-fold in the years afterwards. Seriously read up and learn about abuse dynamics. They are happening here, and you might be like a frog in boiling water and not see it or have been raised in a similar environment and not know this is not ok. Dive deep, learn, and let the information in. The absolute gall of thinking his opinion is better than yours and returning your dress is definitely very telling, advised

“Let me put this delicately, things are not going alright with your wedding planning. You gave many examples of your STBH not respecting you, belittling and undermining your wants for your own wedding, controlling how you should spend YOUR money and running to mommy when he doesn’t get his way. You’re lucky, you’re not married yet. I suggest counseling to make sure you’re compatible and will be happy spending your life with this pile of red flags. NTA,” said

I’d threaten legal action too. I don’t know if you’re going to see that money without a fight.

“Once we reach an agreement” means “once you agree to his demands.”

If you marry this guy, it won’t just be the wedding dress. It’ll be cute outfits, jewelry and makeup. Items for your hobbies. Monitoring your credit card and bank history and telling you that you spend too much money going out with friends.

Do what you want but you’ll be signing up to be controlled and financially abused if you go ahead with marrying him.