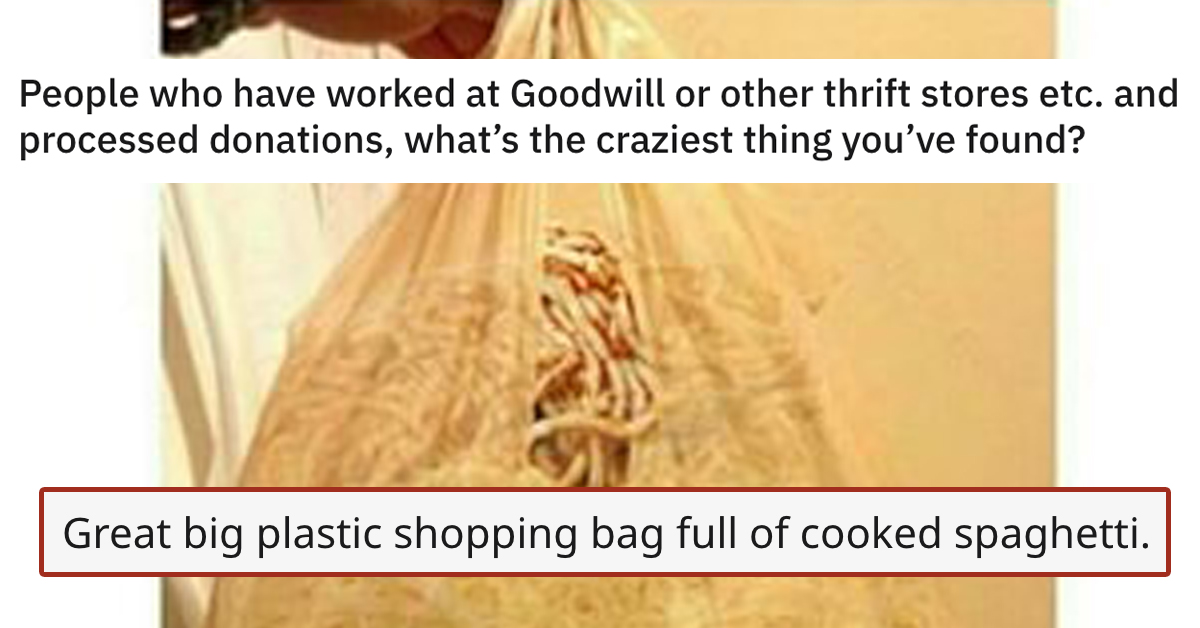 I am a sucker for a good thrift store. You may turn your nose up at buying slightly used things at a discount, especially in the times of Covid, but there’s nothing more satisfying than going home with a perfectly good expensive espresso machine for five bucks.

It does take a special kind of person to find success thrifting. The trick is having the patience and will to sift through the swamp of junk until you find some gold, and if you’re good enough, you can fill your home with quality crap that no one would ever know you bought used.

If you’ve ever had the pleasure of walking around a suburban Goodwill or Salvation Army in the south or the midwest then you know that there are a lot of very weird things that people have purchased, owned for a time, and then decided to donate. Funky furniture, questionable art, grandpa’s old clothes, and very scary dolls are normal-weird but we want to know about the uniquely weird finds.

What better way to find out then to go straight to the source?

Redditor u/fran-farmers-revenge asked the thrift store employees of Reddit: “People who have worked at Goodwill or other thrift stores etc. and processed donations, what’s the craziest thing you’ve found?”

The answers are certainly strange. Kind of gross, but strange. Here’s a list of the 23 oddest finds by the thrift-workers of Reddit.

“A few years ago, when there was an earthquake in México city, many people were donating old clothes and stuff for people who were now homeless. I found a pair of pants that were as tall as me, and each leg could fit me inside of it.” –sarcastic_bitch01

“I worked for a nonprofit for seniors that had a charity shop in it. People often just dropped off boxes of stuff they found in their parent’s attic. One box had a bunch of letters. Some of them were from WWII, when the man was stationed at Camp Carson in Colorado and one of them must have been something they were keeping from an older generation. It was a 1914 letter proposing marriage. It was so romantic. He fell in love with her when they went ice skating together. He included an advertisement for some houses they could buy. They were really nice houses, selling for about $1500.” –SunnyOnTheFarm

“A sword used by a Japanese officer in WWII. A suitcase full of adult toys. A coin collection worth nearly $2000 accidentally left in a cupboard that was donated.” –Davosown

“I had a mate who worked in one of the bigger lifeline stores in Australia. A woman came into the store with five large clear plastic storage boxes and asked to donate them. He looked inside of the boxes and it was thousands of beautifully hand painted Warhammer pieces. He was shocked and asked her why. They were her son’s and she couldn’t keep them in the house anymore since his death. My friend said he couldn’t accept the donation, he said the whole collection was worth a lot of money. She had no idea. He asked her for all her details and asked if he could try to sell it for her. She agreed. After his shift he went home and took photos of everything and posted it online in an Australian Warhammer forum. Within a couple of weeks everything was sold. He called her and she met him at the store. He told her he had sold it to collectors all around Australia who loved her son’s work. He handed her roughly twelve thousand dollars. She cried, he cried, she offered him half, he said no. She told him she would donate his half to a suicide charity in her sons name and his name. He said it was the best thing he had ever done in his life.” –quirkyredpanda

“Love letters between two people from the late 1800s, multiple suicide letters and one suicide tape, and many diaries. One diary specifically was written by a gay man going to med school in the 70s in San Fran. It spans 10 years and has a first person account of his feelings the day Harvey Milk was assassinated.” –kittygocrappy

“I found a hidden ww1 photo. Got in a crappy picture showing the different knots, it was a seaside town i was working in at the time so I put the picture out cheap. Few days later it fell off the wall and the frame broke so I brought it to the back to chuck it out. Found a big military group photo hidden behind. No idea why it was hidden. Here’s the picture https://m.imgur.com/a/coeL3xB.” –Mediocre_Sprinkles

“A dead bat, a switchblade, a pocket watch painted with radium, and an 18th century wolf trap. ” –Senscore