A bartender posted a TikTok explaining why tipping is so important in a video revealing how little the service industry is allowed to pay its workers.

Aaliyah Cortez shared the video of her breaking down her paycheck after working 70 hours. “So this is why you should always tip your bartenders and servers, anyone who waits on you or provides a service for you,” she said.

Cortez notes that she makes $2.13 an hour, which is the federal minimum wage for tipped employees. Before taxes, her check came to a total of $150.81. However, after federal taxes, social security, and Medicare are all taken out, her paycheck came to only $9.28. “For 70 hours of work,” she stressed. 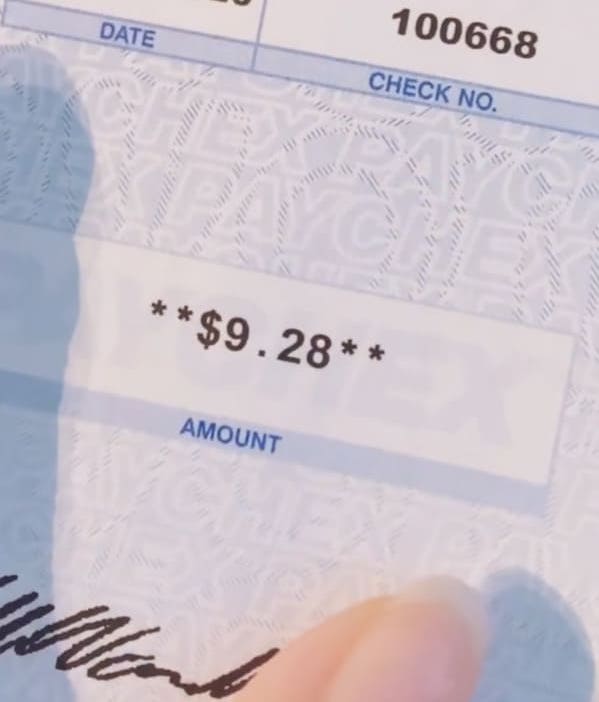 “Of course, I got tips, but this is what I got for my hourly,” Cortez said. “This is why you tip.”

In an interview with BuzzFeed, Cortez said she shared the video to call out the service industry for how little they pay their employees. While the minimum wage for tipped workers may vary per state, they’re only required to pay $2.13 per hour in direct wages if that amount combined with the tips received at least equals the federal minimum wage. This is why so many servers and other tipped employees receive such low take-home pay.

“It’s not right that we have to do this, but I wanted to shed some light on the issue and inform the public about the importance of tipping,” Cortez said.

Many viewers could relate to Cortez’s frustration, while others debated the subject of tipping.

Some commenters were shocked that any business actually pays $2.13 an hour.

Then of course there were some folks who blamed Cortez for even working there in the first place.

Others encouraged her to move to Australia where tipping is not essential.

“I would like to see the system change who pays our wages,” she told The Daily Mail. “Obviously, it should be our employers, but until that can happen we still have to rely on the generosity of our customers.”

In a follow-up video, Cortez gave more context regarding her stance on the state laws that allow restaurants to pay such a low hourly wage.