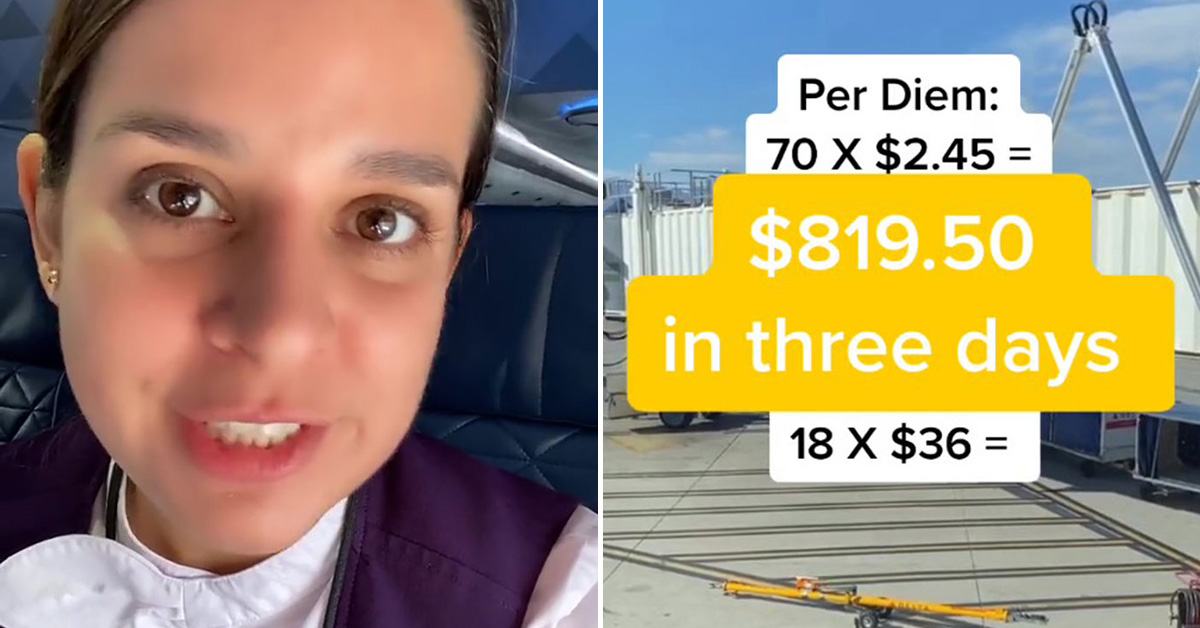 Flight attendants have a pretty cool job, and although we travelers get to see them during the flight, there’s so much more to it than passing out drinks and snacks.

There are many unknowns about the life of a flight attendant, and one flight attendant has taken it upon herself to share what it’s really like on her popular TikTok channel.

Some of us go through like eight weeks of training, and none of it is on customer service. It’s all medical stuff and emergency management.

I had a friend who lived in Puerto Rico and was based in LA.

But we don’t have free tickets to give away, that’s reserved for immediate family members or one person we might choose.

“When you see us, it’s probably not the first flight we’re taking over the day.”

Sometimes we take two, three, even four flights a day, sometimes even five. So half of the time we don’t know where the heck we are.

“Typically, we don’t know the flight attendants that we’re flying with.”

We usually don’t even meet them until that day, unless we’re based there.

“We don’t know anything about the airport that you’re at.”

So if you ask us where to find baggage claim, we’re just going to look up at the signs.

So when you’re boarding the plane, we’re not just saying hi. we’re checking you out.

She later shared advice for anyone who may be interested in becoming a flight attendant:

So I have a few people asking me how to be a flight attendant. It’s actually not as complicated as you might think. You don’t have to have a degree. But if you want to get one to make your chances better, getting hired like hospitality, or business, customer service experience is a huge plus. So as being bilingual.

“The first thing you want to do is choose an airline.”

Once you choose an airline, or two or three, find their Facebook group that’s meant for candidates.

“The members will be a mix of people that just applying or thinking about applying.”

Have a face-to-face already or even got a job offer. There might even be some employees on there that can give you advice.

“Then all you have to do is wait until the company’s hiring and apply.”

If you don’t get hired the first time around, apply again. Don’t get discouraged. Good luck.

“So how much money do flight attendants actually make?”

The answer is, it depends. But I’ll try to break it down for you. Keep in mind, this is also specific to my airline.

“We have two main forms of hourly pay.”

The first form is per diem. The second form is flight pay, per diem is $2.45 an hour. And that starts as soon as we sign in for a trip, 24 hours, as soon as we’re back home.

“Fly pay is what we get paid while we’re in there.”

“We always know exactly what we’ll be making before we actually go on a trip.”

And they can’t pay us less than that.

“Keep in mind that this doesn’t include any bonuses, international pay, or other hourly wages. I’m definitely not a millionaire, but it’s not bad.”

“Here are some weird things that you might see flight attendants do.”

Do you ever see us look in weird places like behind some seats, or step up to look at an overhead bin? That’s because we’re checking all medical and emergency equipment to make sure it’s all good to go for your life.

“Do you ever see us close these?”

That’s because it keeps the cabin cool. It also makes it ideal for sleeping.

No, we’re not chatting with pilot Pete. Typically we’re communicating with either the other flight attendants or the pilot.

“Ever seen us close a not-full bin?”

It’s typically because we’re saving it as a last resort.

“Why do we harp on putting this up and putting our bags underneath the seat as well as our seats lifted?”

Because in an emergency you gotta get out quick.

“I want to show you something cool that some hotels do for airline crew.”

“Check it out it’s a little lounge where we can hang out.”

“We can get coffee, or heat up our food.”

“And they even give us a computer lab. Love hotels that do this.”