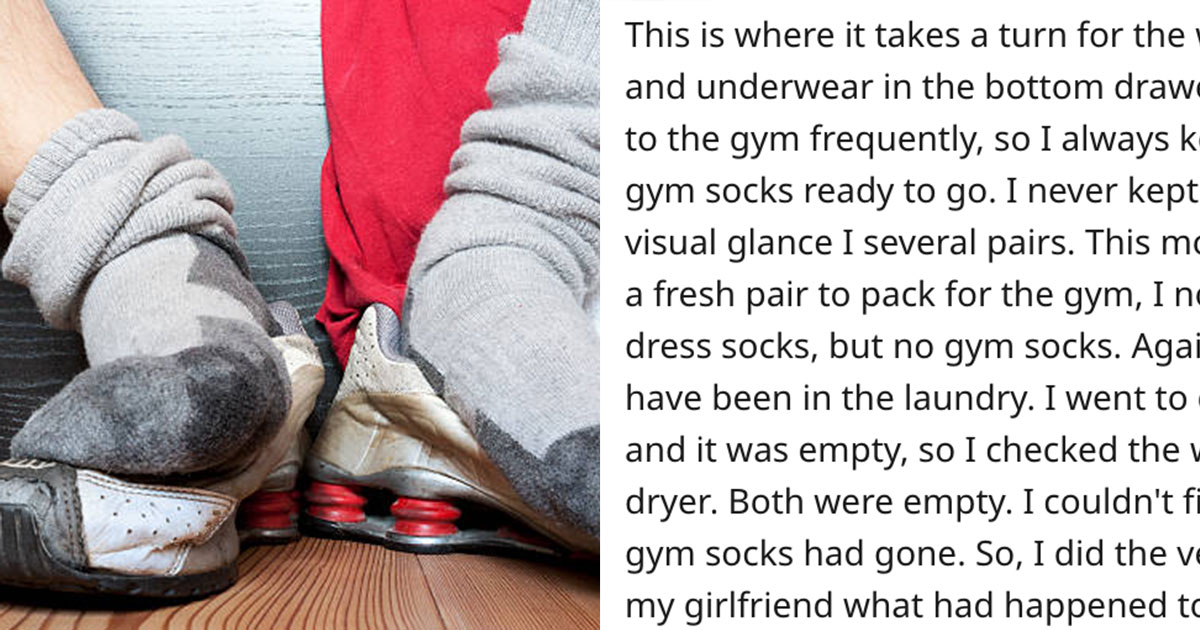 Relationships are full of surprises. The more time you spend with the same person the more you learn about them, especially once you’ve moved in together.

Living with your significant other teaches you a lot about who they really are—what their weird habits are, what annoys them, and sometimes you find out they have some very odd vices. So odd, in fact, that you seek advice from the internet.

At least, that’s what one boyfriend did after he discovered his girlfriend was wiping herself with his gym socks…

Redditor u/whattodobedroom recently shared a story with the online community about something very odd that happened with his girlfriend.

He titled the post: ‘I (28) think my girlfriend (26) has been using my gym socks to wipe after going to the bathroom.’

Feeling disgusted but curious, we continued reading and um, brace yourselves…

I don’t even know where to start with this. I’m dumbfounded. She just stormed out the house and I’m sitting on the bed asking myself A LOT of questions.

I live a pretty normal life, and I thought so did my girlfriend. We’ve been together for a few months and after things got serious, we moved in together. We started sharing a lot of the household responsibilities, but the one thing she was adamant on doing was the laundry. She would come home and find me in the bedroom getting the laundry together and would quickly ask me to go do something else. I’d come back to finish the laundry and she would have already started it. I always thought it was sweet and never her job to do it alone, but hey, if it makes her happy to do it all the time, I wouldn’t stop her.

This is where it takes a turn for the weird.

I keep all my socks and underwear in the bottom drawer of my dresser. I also go to the gym frequently, so I always keep a good supply of clean gym socks ready to go. I never kept count, but I know by just a visual glance I several pairs. This morning when I went to grab a fresh pair to pack for the gym, I noticed there were several dress socks, but no gym socks. Again, not weird, they must have been in the laundry. I went to check the laundry basket and it was empty, so I checked the washing machine and dryer. Both were empty. I couldn’t figure out where all of my gym socks had gone. So, I did the very natural thing of asking my girlfriend what had happened to them. After all, she is the one who does the laundry all the time. She went silent, turned red and ran out of the room. When I went after her to see if she was okay she wouldn’t talk to me. I told her I wasn’t mad, I was just looking for my socks. She kinda mumbled “I’ll don’t know.” I still wasn’t mad, of course, but I was super confused. Socks just don’t disappear. So I asked her again, even laughed about it and she just looked at me and got mad and said “I’ll buy you new ones!”

The first thought that went through my head was she had somehow managed to destroy my socks while washing them. I thought the sight of that was actually pretty funny, so I joked with her about ruining my socks. Wrong. Thing. To. Say. She started immediately crying. Like, full on sobbing. At this point I don’t care about the socks anymore, I want to know what’s wrong with my girlfriend. I sat down next to her on the bed and put my arm around her and asked her of she was okay. She just kept saying she was sorry and that she would buy me new socks. I tried assuring her again it was okay. Even went so far as to say I would buy new socks and she didn’t have to. I sat with her for a few minutes trying to calm her down and eventually had to get ready for work. I told her loved her and got my things together to leave for the day.

On my way out I grabbed the garbage to take outside. When I got outside I lifted the lid off the garbage can and I noticed a small plastic bag sitting on top of the garbage already in there. I could see through the bag (kind of the semi see through ones) there were socks in the bag. Since I was sure she had somehow managed to ruin the socks washing them, I wanted to see for myself. I opened the bag and immediately regretted my choice. There, inside the bag, were several pairs of my gym socks covered in what looked like poop. As soon as the smell hit me I knew it WAS POOP.

Work could wait. I couldn’t go the rest of the day wondering why my gym socks were covered in poop and inside a plastic bag in the garbage can. I grabbed the bag and walked back inside. As soon as my girlfriend saw the bag she flipped out and started yelling at me. She said I shouldn’t be going through the garbage and that I was disgusting for bringing it back into the house.

I asked her to calm down and that I just wanted an answer as to why there was poop on my socks. I wasn’t blaming her of anything, but she started accusing me of blaming her. That’s when it clicked. I don’t know what it was that lead me to ask this, but everything leading up to this moment had just been so crazy. I asked her “Is this your poop?” She started sobbing again and ran out of the house. I didn’t go after her this time.

So, now I am sitting on my bed with a bag of poopy socks on the floor and a lot of questions in my head. The only conclusion is that she used them after going to the bathroom. Which that alone has its own set of questions above everything else. I sent her text asking her to come back. She hasn’t responded yet. I don’t even know what I’m going to say when (IF) she gets back.

We can imagine the author felt something like this:

Fortunately, it wasn’t long before he posted an update:

I had to leave for work and am now at work. Yes, I threw away the bag of poopy socks. She texted me back and she’s clearly embarrassed but felt she owed me an explanation. She said she didn’t want to talk about it in person and that we could discuss it over texting and to NOT bring it up in person. I’m condensing the conversation and filling in some gaps as best as I can. Her responses are super short, but I’m getting the idea.

I flat out asked her if it was a fetish. It is not a fetish. She confessed to using the socks after going to the bathroom. I found the reason she always does the laundry is because she was hiding the fact that she uses socks to wipe with, primarily her own. I had no reason to question the amount of socks she ever has because who pays attention to that kind of thing? She thought I would notice and think it was weird since she doesn’t own many socks. She admitted she has done this for a long time. Her reasoning, as best as I can understand, is that because she is a germaphobe (her word) and she is afraid toilet paper will tear and is afraid of getting her hands messy in ANY WAY. She uses socks because it covers her entire hand. After she’s done with them, she throws them away. She used mine because she didn’t have other socks.

So, my girlfriend has a fear of getting poop on her hands so she wipes with socks, and has done so for a lone time. It could be worse, I guess. I hope we can laugh about this later. I’m trying to find the humor in it now, but I’m still weirded out.

And people have a lot to say about his situation.

Now, if you’ll excuse us, we need a minute to erase this from our brains.