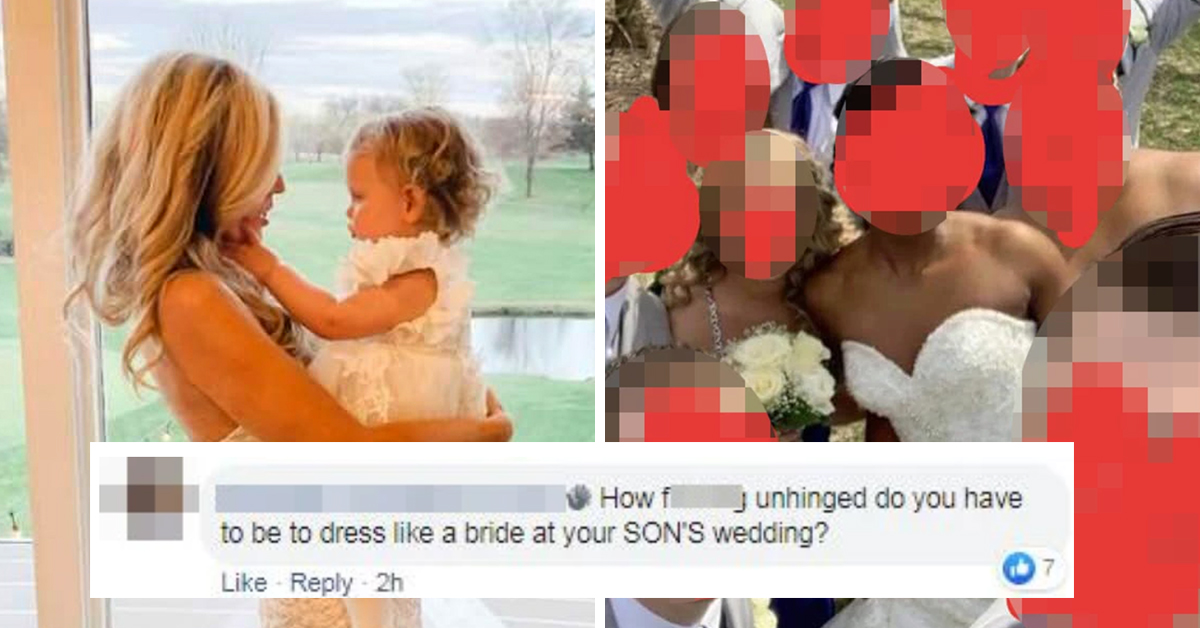 There is absolutely no limit to what people will do for attention. Every woman knows not to wear white to a wedding (unless someone specifically asks them to!). The day is about the bride and groom, and since the bride typically wears white, it’s not appropriate to steal the focus by also wearing white. That’s just the way things are. It’s not a hard rule to abide by.

But one mother decided that restrictions like that don’t apply to her. Not only did she wear white to her son’s wedding, she wore an ACTUAL WEDDING DRESS. I’m literally dizzy from shaking my head so hard.

A woman posted a picture in a Facebook wedding-shaming group with the caption, “You guys… this is my husband’s aunt at her son’s wedding?! Lady, TF are you doing?!”

The picture shows a woman dressed in a strapless white gown that is quite clearly a wedding dress. No word on if it’s the one she wore when she got married or if she bought a whole new one, but either way, it’s beyond rude.

She even posed with the bridesmaids, making it look very much like this was her own wedding.

People in the Facebook group basically just could not. As one person wrote, “How f**king unhinged do you have to be to dress like a bride at your SON’S wedding?” The answer: very.

The post apparently included a picture of the mother with her new daughter-in-law, and it turns out the woman’s dress was the same silhouette as the one worn by the bride.

This behavior is purely diabolical. It’s a really pathetic and rude attention grab from a woman who already had her own wedding, and could have worn something appropriate to her son’s wedding. Our vote? SHAME!