For vegans, nothing tastes as good as telling someone you’re vegan feels. Occasionally, these people interact with the rest of us. They come out of their co-op dormitories, drink a big gulp of Kombucha, and muster just enough strength to tell you you’re wrong for eating meat.

The worst part about vegans, as my friend Matt once pointed out to me, is that they’re right. Yeah, you read that correctly. The dairy industry is going to make the temperature of the Earth rise until Miami no longer exists all because the Impossible Whopper isn’t as good as the original. Also, eating animals isn’t necessarily “good” for you. At least, not the way that Americans eat meat.

But sometimes when you’re right, you’re actually so right, you’re wrong. Case in point, this person wants everyone in the world to stop eating meat, but also doesn’t want anyone appropriating the non-meat food she likes. Wow. She wants to not have cake made with eggs and also not eat it too. That joke almost made sense.

Read it and weep, folks.

This is what happens when a vegan roasts a non-vegan for appropriating vegan culture: 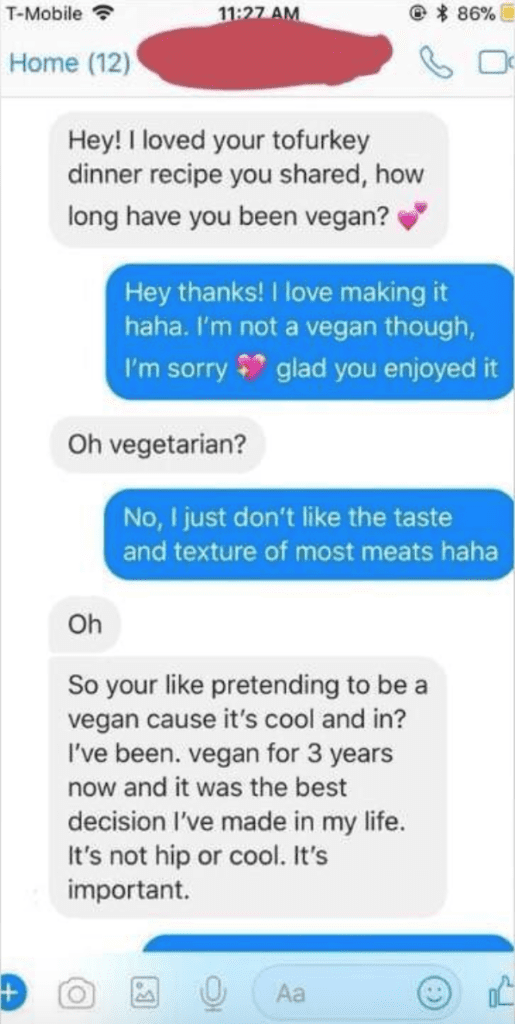 It went on because… of course it did:

Here’s what people on Reddit had to say in response to the allegation:

“‘Stealing what we need for your own selfish use.’ Is there a tofu shortage that I don’t know about?” –KatCorgan

“A vegan telling people to substitute tofu with meat? Shit and i thought i have seen everything.” –wilhelm-cruel

“I guess a ton of Asian countries appropriate vegans and vegetarians as it’s common for tofu dishes in places like Korea and China even though they eat meat or seafood along with it. Kimchi Jigae has both pork or tuna along with tofu in the dish.” –anti_citizen