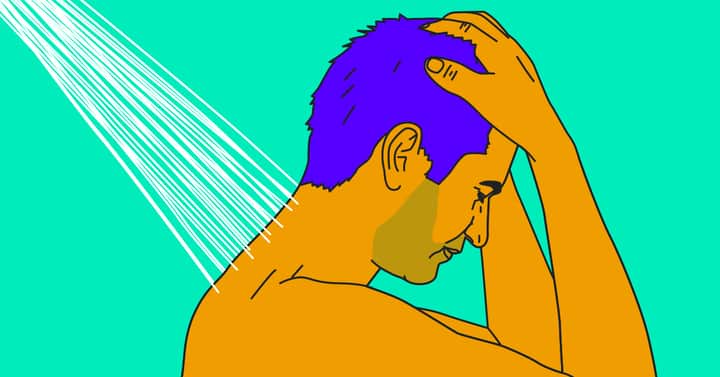 Because I live a “very online” kind of life, I have heard about waffle stomping, the colloquial term for pooping in the shower, then shoving it down the drain by stepping on it. Until now, however, I assumed this was mostly a thing people joked about and didn’t do, like an urban legend about pop rocks destroying your guts or someone stealing a suitcase with a dead dog inside. Horrible things that people like to joke about in chat rooms and on message boards. It turns out that the nightmare is real.

Metro.uk shared a recent study by QS Supplies that states 30 of the 1,010 people in Britain and the U.S. poop in the shower. That implies about three percent of the population is defecating in the place where they also wash their bodies, even though there is a perfectly good toilet two feet away.

Needless to say, people are deeply disturbed by this information:

I’m speaking directly to one in thirty of you reading this post:

WHY ARE YOU DOING A POO IN THE SHOWER, THE TOILET IS RIGHT THERE OH MY GODhttps://t.co/t3rawCTwnR

Please ignore the fact that nobody calls it that

I for one don’t want to know the answer to any of them.

Just try not to picture the venn diagram of those who poo in the shower and those who don’t wash their legs.

Having worked in hospitality I can assure you that they do. More often though in bathtubs……….

Do we really need to ask a plumber what it will be doing to their drains, though? pic.twitter.com/XrGsiJEIGb

I’m going to be looking at the next 29 people I talk to with new concern.

…which one do they do? 🤔😳😳 pic.twitter.com/xETikPpIxp

Apparently, it happens more than any of us ever knew.

And at least a couple of people don’t seem to think it’s a big deal. I don’t know what to say to them.

Ive never done it, but I may do now as we do clean or anus in shower anyway so what is the difference still goes down the same hole, snobs would only moan about this… https://t.co/Aa0NwMg63H

Something tells me this person has never enjoyed a luxurious bubble bath. When your pipes are backed up with toxic waste, it’s hard to relax. Metro.uk did interview an expert named Rob Gallon, the Director of North Staffs Utility Services just to confirm the toilet is for pooping, not the shower.

He said, “If we were to regularly defecate in the shower, this could lead to issues with plumbing and drainage further down the line. Showers don’t have enough pressure or volume of water for bowel movements to pass through drainage systems. The diameter of a sewer pipe is much wider than that of the drain. When a toilet flushes, the large volume of water can move feces, which showers are unable to do so. Sewer pipes also have fewer bends than shower drains. The more bends and junctions there are in the shower drain, the higher the chance of a blockage occurring. If this does happen, it is likely a foul odor will be coming from the shower drain, as well as drainage issues.”

A foul odor out of the poop shower? You don’t say.

On the plus side, QS Supplies is a company that sells bathroom supplies, not an accredited research institution. Maybe this isn’t actually a real thing, just an advertisement stunt. Please, please, let that be the case.