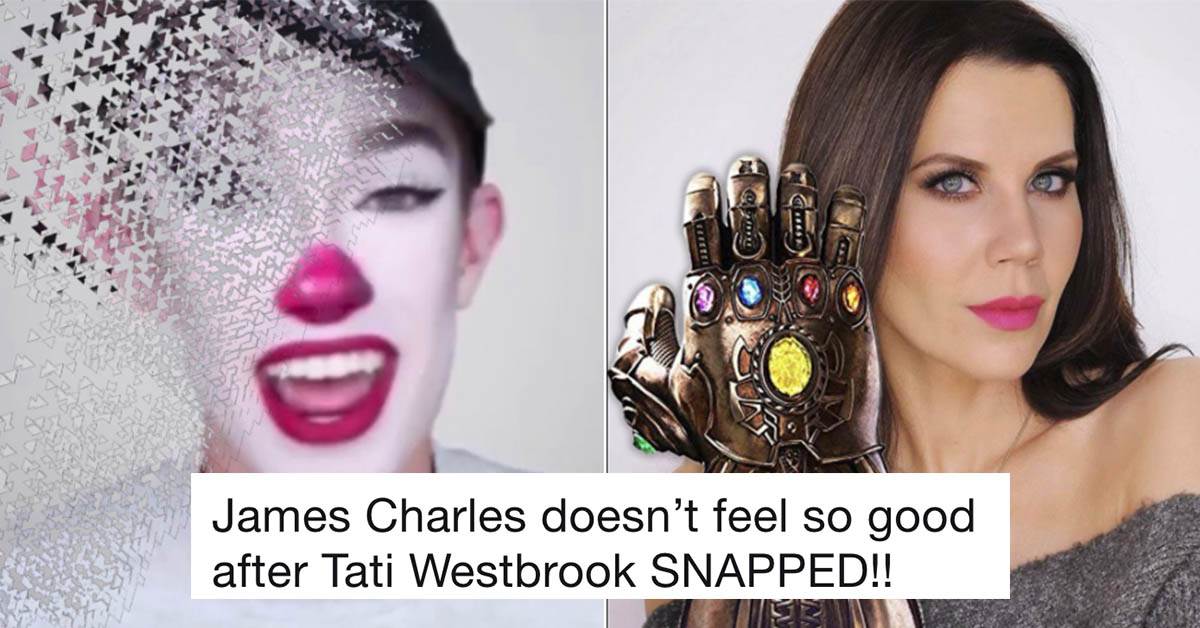 In case you missed it (or you don’t follow YouTubers), this weekend beauty vloggers James Charles And Tati Westbrook went at it online and things were insane.

Who is Tati Westbrook?

Tati Westbrook is a well-known beauty mogul and vlogger who has long been a staple of the online beauty industry. Not only is she one of the original beauty gurus on YouTube, but she also founded the company Halo Beauty.

Who is James Charles?

James Charles was a young kid who was taken under Westbrook’s wing and coached, mentored, and trained on how to become a successful beauty vlogger. To date, Charles had gained millions of followers with the help of Westbrook. Charles was even made an honorary Covergirl cover girl and developed his own makeup brand.

Drama sparked between the two after Charles started promoting a brand that competes with Westbrook’s Halo Beauty. Westbrook said she felt betrayed that Charles would cash in on promoting another company even though she had plugged Charles for years.

Westbrook released a YouTube video (a 40-minute long YouTube video) basically trashing Charles and telling the world how horrible he is, and all of the disgusting things he’s done over the years. It’s truly…mindblowing. The drama, the tea—it’s everywhere.

Later that night, Charles released an apology video—after losing over a million subscribers in 24 hours, setting a new YouTube record.

People online were quick with the jokes for this one, y’all. They were so quick, we had to pull the best ones for you to enjoy with your scalding hot tea.

Me after spending 45 mins of my day, avoiding my own responsibilities to watch the James Charles and Tati drama. pic.twitter.com/IXaTIocOja

me getting ready to watch a 43 minute video by tati westbrook, whom I have never heard of, exposing james charles, whomst I only know about from memes of him not being able to sing and wearing assless leather pants pic.twitter.com/jXMmd9sMXG

me watching all 43 minutes and 8 seconds of that tati video without knowing a single thing about her, james charles, or any products/events she mentioned pic.twitter.com/AiKEY96m84

As YouTube makeup influencers feuded with each other, I couldn’t help but wonder: Had their relationship been built using a bad foundation? pic.twitter.com/HBQcKbwL32

Me: I could care less about James Charles

Did I ever care or give 2 fucks about James Charles? No. Did I watch the 43 minute long video of him being exposed? Absolutely!

Them: you can’t dance to James Charles apology video

Me when Tati told Jame’s mom to stop being on Instagram and take care of her kids pic.twitter.com/7HBe5VvDls

me explaining the Tati and James Charles drama to my dad pic.twitter.com/LobpLo73fk

Remember when James charles sub tweeted this, I – pic.twitter.com/owkvEz4jS3

James Charles preparing to give a convincing apology video: pic.twitter.com/Yd8nrNDD4d

can anybody please tell me how to lose weight as fast as James Charles is losing subscribers and followers? #jamescharles pic.twitter.com/CXvxDxAHm5