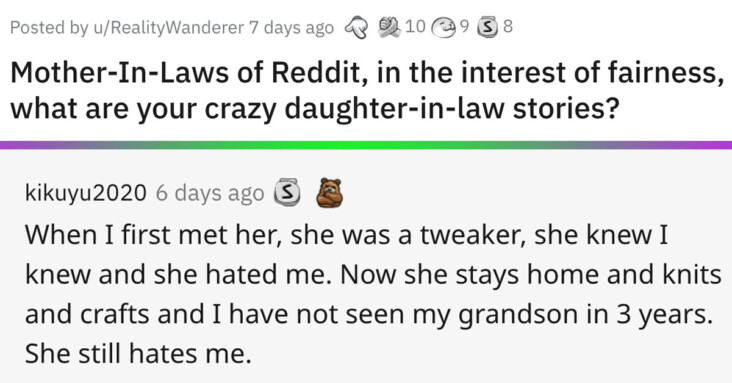 We always hear the stories of over-bearing, over-sharing judgmental mothers-in-law but do we ever stop to think, maybe it’s the daughter-in-law that’s the crazy one?

It’s got to be tough to spend 20-ish years raising a little dude only to pass him off to another woman. Especially when you aren’t so sure about the woman.

Redditors are giving MIL’s a chance to tell their stories about their crazy daughters-in-law. Reddit user RealityWanderer wanted to give Mom’s whose little boys grew up to marry pushy women a chance to vent about their DILs by asking:

“Mothers-In-Law of Reddit, in the interest of fairness, what are your crazy daughter-in-law stories?”

Turns out, even in the safest Reddit spaces, sweet MIL’s won’t talk trash about their crazy daughters-in-law. Some even went so far as to say they loved their son’s wives. But that didn’t stop third parties from telling the crazy DIL stories.

Here are the 18 best daughter-in-law stories from the sisters, Aunties, DIL’s themselves, and a few actual Mothers of Reddit.

“We lived on the other side of the country from them so we didn’t have many visits — one or two a year. When we visited, all was well — the house was clean, the kids were cared for, etc. She was fun to be around. However, once we left, life went back to “normal” for my son and grandkids. She would say she was going to the store and would not come home for 2 to 4 days. She did drugs. She did not clean — anything. My son traveled for business and when he was gone she had many different men in the house. He would come home to a trashed house, trashed car, trashed everything. She would put the kids to bed, then leave to party. She kept the two oldest kids home from school when he traveled — she was too busy sleeping from partying all night to take them to school. As he was making plans to leave her and take the kids, she killed the youngest child and is now in jail awaiting trial. all of this came out after she died. I wish they had never met.” –throwawaytardis12

“She so crazy she married my son!” –Zlifbar

“When I first met her, she was a tweaker, she knew I knew and she hated me. Now she stays home and knits and crafts and I have not seen my grandson in 3 years. She still hates me.” –kikuyu2020

“Have to admit, I have the sweetest DIL. When they bought their new house, it has 5 bedrooms (for 2 people). I said good, now you have a room just for me to visit for an extended time. She was happy and asked when I thought I would get there? My son had to explain to her that I was kidding and would not be making an extended visit to their house.” –traveltoo7

“My MIL has a very rocky relationship with one of her Daughters in law. There are a few of us. This one time this particular DIL (with a rocky relationship) had started “being nice” to our MIL by going to lunch with her and giving her advice on how to change annoying aspects of her personality. This lasted for a couple of months. Finally the DIL had an absolute rage session and started screaming at the MIL saying how she could no longer be part of this ruse and that all her attempts at being friendly and trying to changing the MIL’s personality was pointless because the MIL was too stupid. To this day they don’t get along and family gatherings are always super uncomfortable. This of course is from my POV so I can’t say for certain what was actually going on in either of their heads, but there you have it.” –SiXleft7“

“I love my dil! I’ve had two horrible mothers in law, shocked my young self as I’d never seen such a thing! I go out of my way to encourage a good relationship, if my son loves her then… there it is!” –firefightersgirl76

“Neighbor, not myself as I’m a guy. My neighbor is jovial, NEW GRANDBABY! PICTURES! MORE PICTURES! Constantly talking about how hard her DiL is trying to be a good mom, is stressed (first baby for her) out, so she’s thinking about flying to help take some of the load off. DiL was initially receptive, exhausted, happy to have help and possibly even some “alone time” to decompress. So about two months after baby was born, after securing time off work, she flies out to help. Flies back two weeks later, very unhappy. Wife and I don’t broach anything but one day she lets loose.
Grandma was taking baby out and about, fresh air and give mom some “me” time. She was planning on staying away for a few hours, but found out she forgot the baby wipes in the bathroom at home after baby made a mess. She arrives back and walks inside to hear her DiL screaming “OH GOD YES F*CK ME LIKE WHEN WHEN YOU PUT IN ME!” ‘OH GOD YES! YES! MIKE!” For the record, her son’s name isn’t Mike.
After calling her son at work there was a pause as he listened and wrangled two female friends. Much gnashing of teeth ensued when he got home two hours early, with female friends in tow recording, and her “boyfriend” trying to get down the street half-dressed. MiL pulls up to see her DiL wrapped in a blanket screaming at him that it wasn’t what it looked like, blah blah blah. MiL says son should get a paternity test, baby possibly not his blah blah. Now a not so happy MiL. Obviously there was a divorce, but I don’t know how that went and I’m not about to ask.” –AppletonPilot

“My dil decided , after years of manipulating my son , to walk out on him and their two kids. A few hours later she changes her mind and bombards him with all kinds of crap for a week. And then she gains access to the house when he’s out and changes the locks causing him and their two young kids to be homeless. She sucks!” –mysonisatwat

“Happened to a friend. Her brother married this girl who was his college friend. Very happy, have a baby girl… Suddenly her father passed away so her mother went to stay with son and DIL. At first she was ok. But after like a month, DIL started to lock the fridge ( in india fridges come with internal locks) and pantry doors. She started cutting down MIL’s food. When my friend came to know about this, we went to her brothers place, packed her mom’s stuff and brought her back to my friends house. Scary lady that DIL. Brother didn’t say shit to his wife.” –thatindianmum

“So not a MIL, but one of my mum’s friends. Her son was on track to become an engineer and then he met this girl. She was a teacher and wanted to be a “full time mummy” (which there was nothing wrong with). He ended up dropping out of his degree as she told him, she got pregnant, he works at a dead end job and she demanded she cut him off from all his family. She’s very anti-vax/5G and is totally consumed with every conspiracy theory going. He no longer talks to his mum, or any of the family. I grew up with him and he was always such a level-headed, confident guy and now his Facebook feed is full of anti-vax nonsense, baby pictures or messages between him and his now-wife about how they’re going to have the best family forever. The mother of the guy respects his wishes, but whenever my mum mentions her, she always says that she feels like she lost her son. Bit heartbreaking tbh.” –TheLittleCas