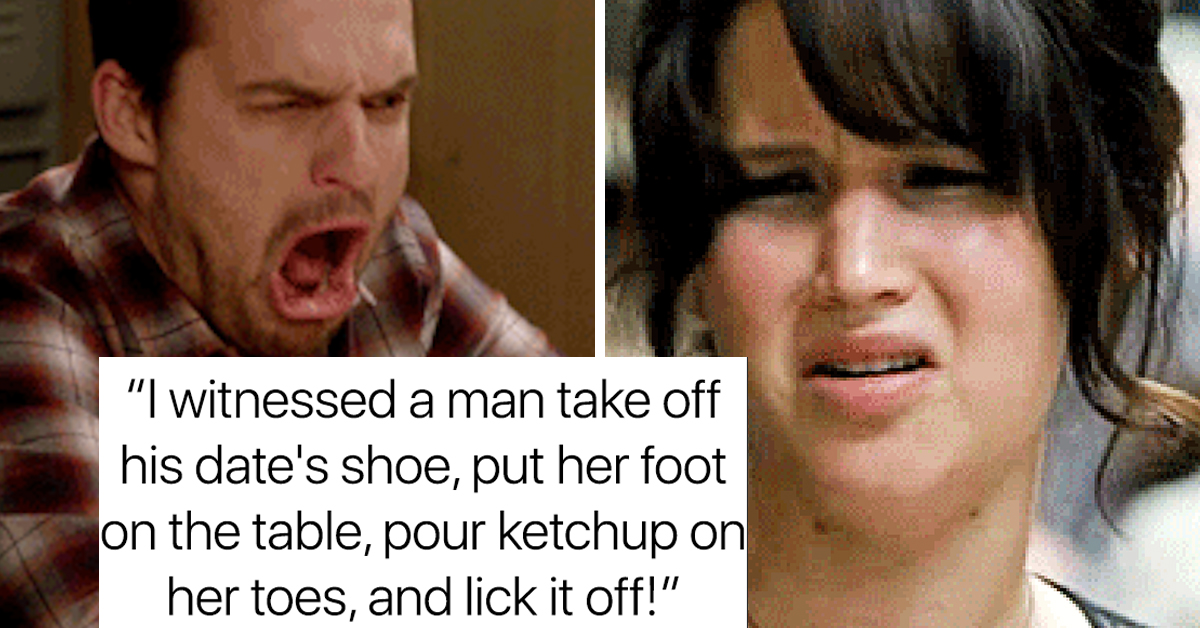 People who have worked in a restaurant have, nearly without fail, witnessed some totally gnarly things. Things that made them think twice about eating at restaurants—both their own and others—though never fully stopped them because eating out is AN ADDICTION, PEOPLE.

I used to work at a place where two-week old chicken wings were reheated and served as though they were freshly made. I worked at another restaurant where the chef was constantly wasted on prescription pills and liquor. I never actually saw him do anything nasty, but I have no doubt that he did.

Just look at every single restaurant Gordon Ramsay has ever visited. Each episode features fridges where old soggy raw meat rests atop cooked meat, where grills are filthier than a sewage drain, where the head chef sneezes all over the utensils and proceeds to fry up an order of Eggs Benedict.

So when BuzzFeed recently asked their community to share the wildest things they had ever witnessed at a restaurant, it wasn’t necessarily surprising. It was still completely disgusting, though. Like, vom to the max.

“I was having lunch with a group of workmates in Phoenix. As I was eating, a giant cockroach crawled up the shoulder of the woman across from me! Horrifying!”

“My first job was working at a restaurant as a hostess. One day I arrived for a shift and learned that at least half the cook staff, including a manager, had pink eye. I spent my entire shift spraying everything around me with Lysol. Every time customers came through the door, I wanted to tell them to turn around and leave. It drove me crazy to look at all the food going to tables just knowing it had been prepared by germy, pink eye hands. I put my two weeks notice in that day.”

“I worked at a restaurant and it had been really busy all day, so everyone was getting really irritable. The cooks started arguing about who was working the hardest. They eventually both went outside to smoke and started fighting. One of the cooks bit a chunk out of both ears from the other guy he was in a dispute with. They were both fired immediately.”

“The worst thing I ever saw at a restaurant was one of the bakers using his WHOLE DANG ARM to stir a huge vat of cake batter with his hand. He dug straight down to the bottom…up to his elbow. I don’t eat store-bought or restaurant cake anymore.”

“This restaurant is known for its brunch. I was waiting to be seated and I saw a member of the staff take a straw out of a half empty glass of orange juice, top it off with fresh orange juice, put a new straw into it, and serve it to a customer. They were confronted, but the manager got defensive and yelled at the person confronting her, eventually throwing her out of the restaurant.”

“I ordered a cranberry juice from some some little highway restaurant on a road trip and it was definitely spoiled. I asked if I could get something else because it didn’t taste right. Instead of letting me get a different drink, the server gets the manager, who proceeds to pick my glass up, take a drink, and tell me it’s fine. I was completely stunned.”

“While eating breakfast, I saw a guy at another table put ketchup on his fries, LICK the top of the bottle, and put it back on the table.”

“I was at a restaurant in Philadelphia, where I live. It was somewhat fancy. There was a couple sitting a few tables away from ours, and the man had hid a ring in her champagne glass. When he began to propose, everyone in the restaurant started clapping…and then suddenly went quiet. The girl was crying and everyone assumed it was because she was so happy. She asked the man if they could talk privately, but he was getting frustrated with her. He kept telling her to answer the question. She whispered to him, while in tears, and revealed that she had been cheating on him with his brother for the duration of their three and a half year relationship. I’m not sure how many people were able to hear, but she was mortified.”

“While serving at a restaurant in downtown Chicago, I witnessed a man take off his date’s shoe, put her foot on the table, pour ketchup on her toes, and lick it off! This is a scene I will never forget.”

“I manage a restaurant where people bring in cakes all the time for celebrations. One of my servers had a birthday party for a young girl who was 9 or 10. They brought in a cake in a plastic bag and gave it to the server, so she put it away in the kitchen. When it was time to bring out their cake, the server came to me with tears streaming down her face and said, ‘It was an ice cream cake!’ The server didn’t realize it was an ice cream cake, so it sat out in the kitchen for about 2 hours before we were ready to serve it. The server was mortified and couldn’t face the guests again. We made it up to the guests by making them special Oreo ice cream sundaes, but that is literally one of the funniest nights in my restaurant career.”

“There were small children at the table next to us who were SUCKING ON the top of the salt shaker. The parents did nothing, and the staff were oblivious.”

“Once I was in a fast food restaurant and this middle aged, angry drunk man was shouting for no reason about his stolen furniture. At first I thought he was talking to an employee, but the manager eventually had to ask him to leave. He got really upset and walked outside then proceeded to urinate on the front door.”

“I was working a shift at a pub on a busy event night. During the dinner rush, a guy started choking and the two people he was with froze and did nothing. My co-worker jumped in and gave the guy the Heimlich, essentially saving his life as the packed restaurant watched on in horror. He paid the bill and left about a 10 percent tip.”

“I worked at a restaurant for a couple months. One day I rushed to the bathroom and was shocked by the stinky smell. I used one stall and after I was done, I checked the other one. The whole toilet, wall, door handle, and sink was smeared with poop. That wasn’t a nice break. Had to clean up the whole mess!”

“I was at a restaurant once where every table had a candle on it. There was a grumpy older couple behind us that was being rude and giving me the evil eye. While they were glaring at me, their napkin fell on the candle, CAUGHT ON FIRE, and the fire began to spread on the lady’s shawl. She then realized she was on fire and put it out with her husbands napkin.”

“I was at a Ponderosa a few months ago in the middle of a rain storm. The restaurant was full and the ceiling had begun leaking. Before we knew it, the tiles on the ceiling came down and there was water EVERYWHERE.”

“My family and I had gone out for some burgers and fries. When we got our food, there was pickles on my grandma’s burger, so she lifted the bun to take them off but was greeted by a DEAD FLY. We called a worker over and she said, ‘Oh no worries!’ She then proceeded to WIPE the fly off the burger and give it back to my grandma. We haven’t been back since.”

“I spent my birthday bartending at a little hole-in-the-wall restaurant. It was a relatively quiet night until about 45 minutes from closing. All of a sudden, a panicked man comes out of the bathroom covered in water. Sopping-fucking-wet. He looks at me with horror, disgust, and shame and says, ‘Ma’am, the entire urinal has come off the wall, and it won’t stop spraying water.’ I try to turn off the water. No luck. Boss doesn’t know where the main shutoff is because, you know, an entire fucking urinal shouldn’t come off the wall. We get it to stop, but it turns out the drain doesn’t function because it’s so corroded in gunk, so it’s coming back up the hole. The final hours of my birthday were spent mopping up a mixture of urinal water and drain sludge.”

“I worked at a fast food place. If anyone accidentally dropped bread on the floor (a very nasty, dirty floor I might add), our manager would tell us to rinse it off in the sink and put it back. RINSE THE BREAD IN THE SINK. I never actually did this, but I witnessed her do it many times.”

“A server was walking with a wine bottle and slipped and fell. The top portion of the bottle broke leaving the base with shards sticking out. As he fell, his hand landed on the base of the bottle, which pierced his hand and completely severed his finger off. He was bleeding out when the paramedics arrived. Luckily they were able to reattach his finger. I always figured I’d hear about someone chopping their finger, but I never thought a wine bottle would do that.”