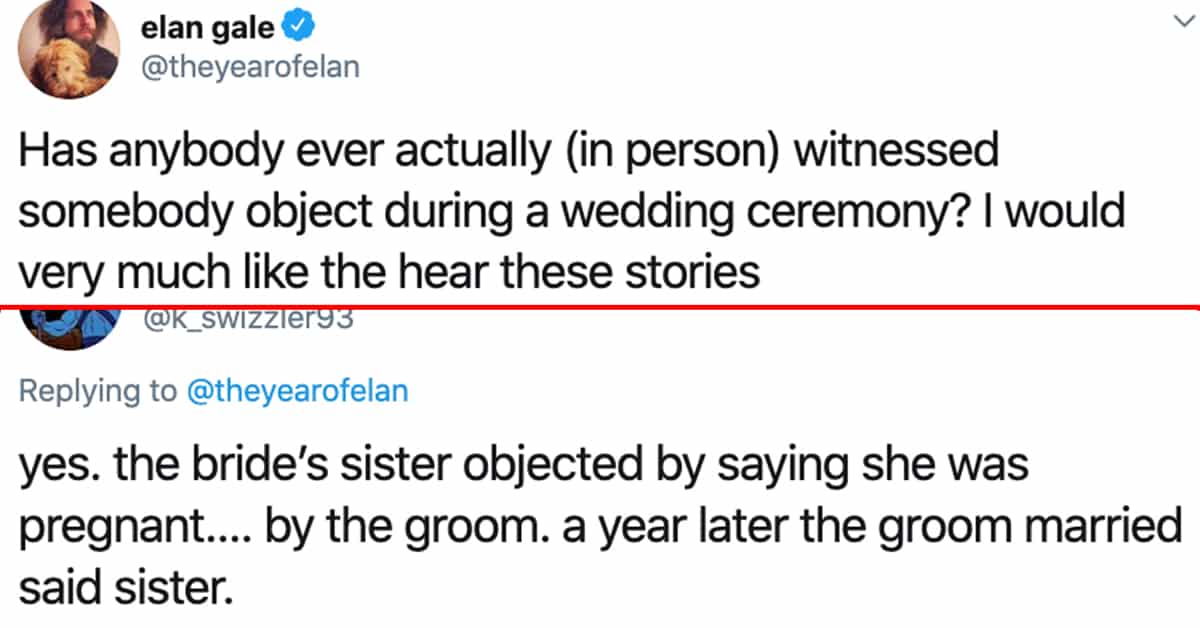 The idea of someone yelling “I object!” at a wedding is a centerpiece of so many romantic comedies and dramas, but does it ever happen in real life? The tradition was never really meant for people to declare their love at the last moment anyway—it’s for folks to object on legal grounds, like if someone is about to commit bigamy or marry their own brother.

Now, people have to make sure none of those things are happening BEFORE the ceremony begins. Some ceremonies don’t even include it anymore, but ceremonies are hard to shake.

Writer Elan Gale asked his followers if any of them have ever actually witnessed someone taking advantage of that moment to cause some mayhem:

Has anybody ever actually (in person) witnessed somebody object during a wedding ceremony? I would very much like the hear these stories

One person shared that in Australia, supposedly if you disrupt a wedding without just cause you have to pay for it, so clearly a lot of people have been tempted to do it without a good reason (besides horniness or something):

Apparently in Australia if you object to a wedding and can’t prove why or have a valid reason you are on the hook for the cost of the wedding.

And that turned out to be true. There were a LOT of stories. Many of them involved alcohol. Few people were actually listened to, unless cheating was involved. I think Australia’s rule is fair: if you’re going to cheat with a  bride or groom and then break them up, do it before they’ve lost their deposits on the catering or be forced to pay for it.

I was a bridesmaid in a wedding and the best man objected because he and the groom were having an affair. Bride was shocked but we all attended the reception (minus groom and best man) and had one big ass party!!

No but once I was at a wedding where bride didn’t show up.

Yes. It was quite literally In The backwoods of MT. The brides ex was said to be hiding out in the Woods. The bride was about two hours late. One of the grooms brothers was officiating. The other brother objected and the groom punched him.

I worked a wedding where the groom got so drunk that he got cut off as soon as he walked into the reception… he got mad, punched his brother, ran down the street and jumped a fence into a buffalo enclosure (I was the one chasing him). He disappeared and did not return.

We had that taken out of our wedding because we were very afraid that one of our friends would object. Considering he professed his love to me at the reception, it was a good move.

I was at a wedding and the priest asked, paused and then the loudest crack of thunder I have ever heard occurred. Window rattling thunder. 👀 Awkward.

The bride and the boss eloped about a month later. It lasted less than a year.

That ending took a hard left 😂