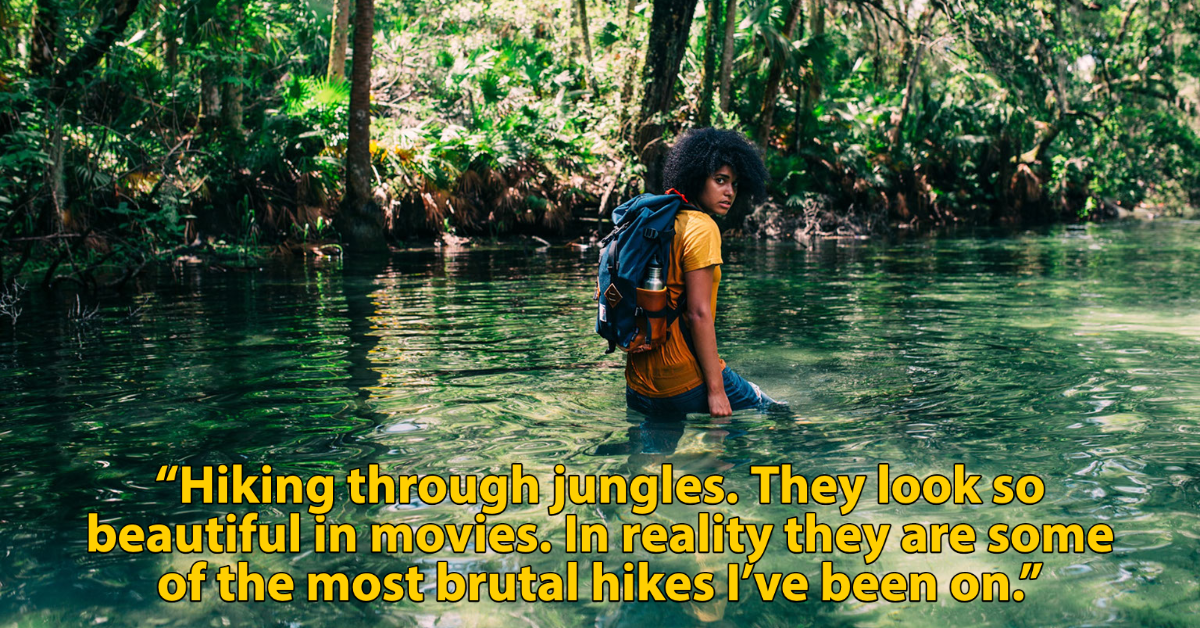 In life, it’s important to do new things and take chances. You never know — you might end up loving sky diving or eating snails or getting tattoos. But on the flip side, you might also hate these experiences and never want to do them again.

On Reddit, people are sharing the things they’ve done that they would never want to do again.

And while a lot of these things come from youthful ignorance, some are choices adults made — and then said, “no, thanks” to further experiences. You don’t always have to regret your choices, but you can certainly stay out of caves or avoid spraying your butt with deodorant in the future.

“Carolina Reaper infused gummy bear. I almost called for an ambulance. Legitimately thought I was going to die covered in sweat, shit and vomit.” — Sure-Iwillbethatguy

2. Using Car Exhaust To Blow Up An Air Mattress

“I stayed at my sister’s place one night and we for the life of us couldn’t find the vacuum cleaner to blow up the spare mattress. So I hit on the bright idea of using the car exhaust to blow up the mattress. Back then the car used leaded petrol. As a rule, I sleep with the windows and door closed so I am damn lucky. Woke up next morning (in hindsight luckily) with the mattress 1/2 flat and the room smoggy. But being low to ground near door, the draft under it keep me alive (again in hindsight).” — dopeydazza

“Hung over and zipped my zipper before I was ready.” — darrenwise883

“Mixed milk and orange juice because I thought it would taste like a creamsicle not make me projectile vomit.” — No_Chemical_3827

6. Aluminum Foil In The Microwave

“Put pizza wrapped in foil in the microwave when I was 10 thinking it will warm up quicker. It surely did by lighting on fire 3 seconds after I turned it on.” — steamedpotatoezz_

7. Hiking In The Jungle

“Hiking through jungles. They look so beautiful in movies. In reality they are some of the most brutal hikes I’ve been on. Let’s start with the humidity. It’s so bad it drenches you to the bone, and there’s no escaping it. Being under a jungle canopy is like being in a pressure cooker. The heat and humidity beats you down harder than any environment I’ve been in. Then there’s the swarms of biting bugs. From never-ending mosquitoes, giant spiders on everything, ticks jumping on you from everywhere and colonies of aggressive fire ants criss-crossing the trails, you can expect to have more bug bites than you’ve thought possible to survive.” — Ghost-Writer

“Went to Times Square for New Years Eve in New York City. I live in NYC and I figured it was the kinda thing I wanted to see but didn’t need to see again. Went in 2000 when I was 18. Got there 11am and stayed for 13 hours in the freezing cold but with close spots to the ball drop and screen. I’m glad I did it. I’m also glad I’ve never done it again.” — dubbznyc

“Not paying attention to currents when swimming in the sea (and going anyway when there’s a red flag and no guard). Dumbest shit ever. I was with my two brothers and my father, happily splashing around. Suddenly we turn around and the shore just got very far away. So we start swimming back but the sea is stronger than you. If you stop 5 seconds to catch your breath you lose the progress you did during the last minute, and that’s precious. I was young so I don’t remember it as a legit life threatening situation, but my bros and dad still got chills when talking about it.” — DonMendelo

“Removing paint from a table. I still need to finish sanding the thing but that was a nightmare, who paints a table with like 30 coats??” — Dtoodle

“Did heroin for the first time and wasn’t into the sensation at all. The same roommate that talked me into heroin talked me into smoking some crack to even out. Luckily I wasn’t a fan of either and never did either ever again.” — BLKWD_

“I jumped off a roof barefoot when I was a kid, I’ll never do that again. It was an older house and the roof was low to the ground, so it seemed okay, but my judgement led me astray. I landed on a stone entryway and immediately collapsed to the ground. I had to crawl my way back inside and it was extremely painful. The reason I did this is because the bathroom door jammed shut and I had no way out (old house). Didn’t break anything but my feet were bruised, I’m surprised I didn’t break anything from the hard impact.” — Samm092

14. Deodorant On Your Butt

“Spray deodorant on my arse to cover up the smell of my farting…I was 6, once that spray hit my bullet hole, the burning began.” — TheNorthernBaron

15. Stayed At A Bed And Breakfast

“Stayed at a bed and breakfast. I’m not social enough to socialize with people during breakfast.” — AllDressedKetchup

“Got drunk once with friends under the Ambassador Bridge drinking 120 proof rum from duty free shop. Puked my guts out. Can’t stand the smell of rum since and it’s been 53 years!” — suespence

“Bath salts. Tried some from a guy who went by ‘Asian Billy.’ I did about enough to cover the head of a framing nail and was pretty much having a panic attack for the next 8 hours. I went to a casino with the other people I was working with and Asian Billy and sat at a blackjack table and just said, ‘I have no idea what I’m doing, sorry everyone if I mess up your bets.’ Everyone was cool and I ended up winning $175.” — fungalhost

“Tried to intervene during a street fight. Got shot for my troubles.” — Matts3sons

“I stole a tester eyeliner from the makeup section at a store when I was 17. The security guy took me aside in a small room and ‘questioned’ me, asked for my information, and to scare me, he said this would always be in my record and companies won’t want to hire me anymore and I burst into tears and had a panic attack. He said he’ll let me off if I pay double the price of the eyeliner, so I did and he let me go. Now, I don’t know how much of what he told me was real and if the resolve was legitimate, but if he tried to just scare me into not becoming a serial swiper, it worked.” — Te-hole

“Spelunking / cave exploring. For starters, it begins and ends with going through a million bats. And the journey in between is just too dangerous, in the last place in the world you’d want to get hurt. And super tight squeezes are freaky.” — Scrappy_Larue