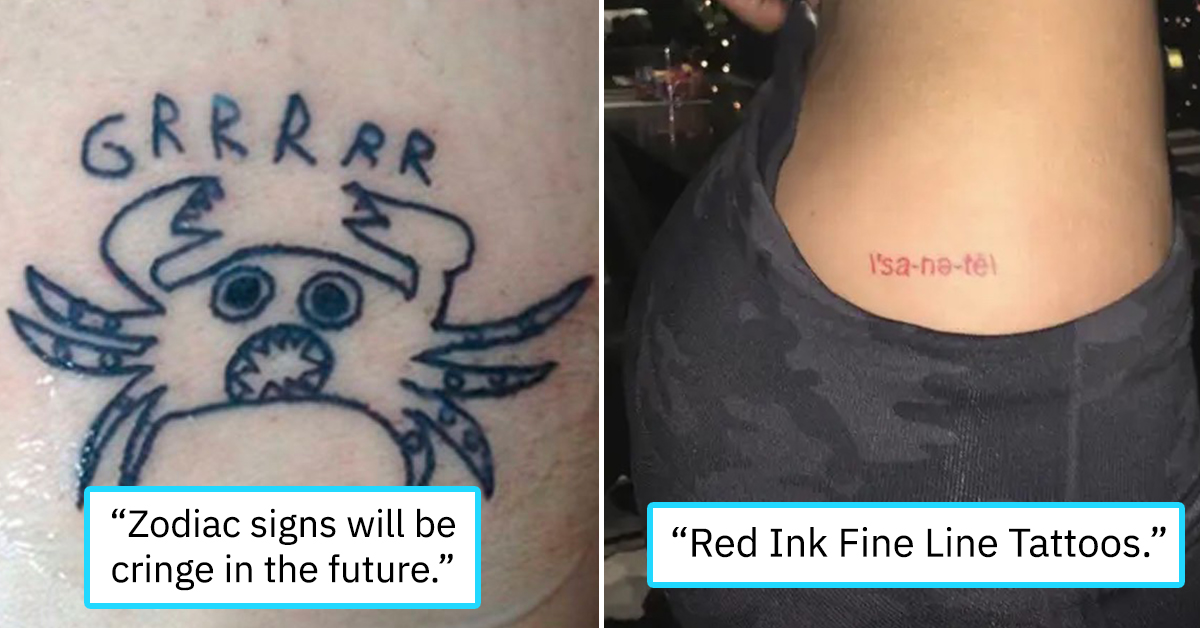 Not every tattoo is a winner. For instance, I really liked Harry Potter at one point in my life. I also really liked the person I was dating at the time.

Guess which ended up on my skin permanently! Neither because I was smart enough to know how long life is.

Other people, unfortunately, did not give as much forethought to their tattoos. The good news is: a lot of people with tattoos don’t care. You only get one life, might as well do whatever you want whenever you feel like it.

Some people, however, love to judge. They judge themselves and they judge others. People on Reddit and Buzzfeed have strong opinions about what tattoos will and won’t hold up.

Here are the tattoos people believe will be cringe-worthy someday:

1. Save it for the back of your truck.

“Calvin from Calvin and Hobbes peeing on stuff.” –alanladdismydad

When you walk in and say “give me the Kylie Jenner.”

“Gothic and grunge tats like cherubs holding guns, skulls, black butterflies, snakes, etc. They’re pretty in style right now, but soon it’ll be cringey to see them and think of how ‘deep’ they used to be.” –hannaheatmybubbles

“Tattoo artist here! My coworkers and I have a ‘basic’ folder of artwork that people ask for over and over — things like monarch butterflies, simple line work, hearts, and peaches that lots of people want on their ribs or booties.” –leahmroy

5. Medical proof that these tattoos say a lot about a person.

“I work with the deceased. I’ve seen a direct correlation between “ONLY GOD CAN JUDGE ME” tattoos and being a victim of gunshot homicide. Juggalo tattoos don’t bode well for MVAs. Tasmanian Devils go hand in hand with gastric bleeds from chronic alcohol consumption.
The clinically depressed seemed to like dolphins.” –beachumbrellasmoke

6. Make sure you read the fine print.

“Micro tattoos, especially on fingers. They’re not going to last long before getting blurry or faded.” –papaya2

7. Stick with the teardrop.

“A defendant in the courtroom I clerked in during law school had “homicide” tattooed on his face, over his eyebrow. Not a great look.” –Silidon

“Couple tattoos like portraits or names. Mostly when they proudly tell you it’s because they’ve been together for 5 months and just know they stay together forever.” –Gingeraffe25

10. Skin is not the right canvas for this.

“Watercolor tattoos. They don’t always heal the best, and because often there’s no outline, you can’t even tell what it was originally supposed to be.” –monikap6

“Knew of a guy once who had “DUBSTEP” tattooed on his chest in VERY VERY large letters. He also insisted that dubstep was the future of music and was here to stay.” –Shadesmctuba

12. Careful about which celebs you worship.

I personally think getting celebs’ faces tattooed on you! I’ve seen a lot of people like this and isn’t it…a bit much?? Not only is it just weird, but it’s like WTF?! And especially the fact that they may not know them personally, and yet they still have them inked on their bodies. I think this will definitely be cringeworthy and just weird in 10 years.” –livypacy

“Had a lady come into the store I was working in with a big neck tattoo that said Daddy’s girl….may have been the most shocking one i’ve ever seen.” –UnpavedWalrus

14. Why not just write that on paper somewhere?

“I don’t know the exact English word but in German it’s called “ass antlers”. I’m not sure what it’s actually supposed to represent but it kind of looks like you’ve got a deer tossing your salad inside your pants.” –sharmaji_ka_papa

16. Leave the Joker behind.

“Nothing says “I’ve been to prison for cooking Meth in my trailer” like a Joker neck or face tattoo.” –Celer_Umbra

“I was in the Army with a guy from Texas that thought he was hard as woodpecker lips. Had ‘Cowboy The Fuck Up’ tattooed across his forearms (ostensibly so if he put his fists up to fight you, you would read it and… I don’t know, be scared or something? He never got in any fights that I know of.) But due to the size he wanted it and shitty planning, one arm said COWBOY THE and the other arm simply read FUCK UP. And he immediately became known as Cowboy, the fuck-up.” –RistaRicky

“I once stood in line behind a lady who had, like, the bad tattoo parade going from the nape of her neck. She had “Only God Can Judge Me”, something in Asian characters, and an ugly, faded, poorly drawn crucifix.” –transemacabre

“Those creepy faces of babies, which look like there’s a little demon on your body.” –Muximal

“Get whatever you want, just don’t be a tattoo copycat. It’s fine to be inspired by other work you’ve seen, but don’t just ask your artist to re-create it exactly for you. Find an artist that will work with you and bring their own spin on the piece.” –gracelee32

“Tattoos in general will probably fade out of fashion as quickly as they entered — 15–20 years ago, virtually nobody under the age of 60 had tattoos. I’m certain it will be so again.” –jjjj00