There are plenty of things people do that are clearly dangerous, like firefighting or playing football, but both things are pretty easy to avoid.

Humans try to keep themselves safe, but sometimes freak injuries happen, and sometimes the way they happen is really, really stupid.

Twitter user @Super70sSports admitted that they once broke their index finger on the door of their bathroom.

That’s it. No one broke it for them, they weren’t saving a baby from a burning building. They’d just gone to the toilet and BOOM.

They added, “That’s incredibly stupid but I know some of you can defeat me. Go.” 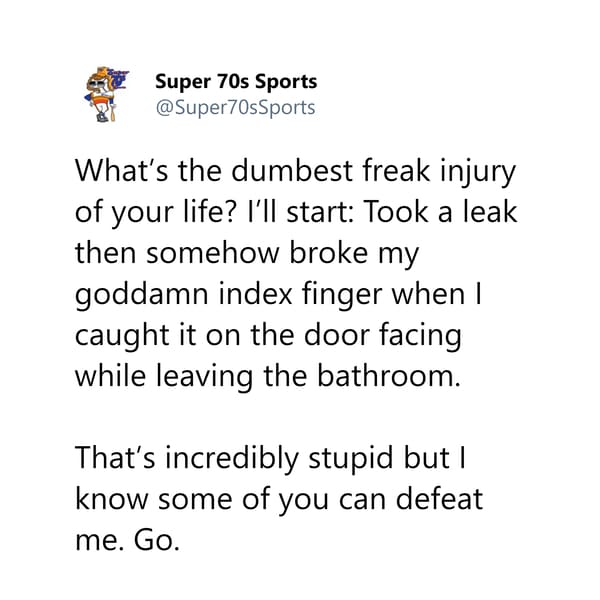 And people really did. Personally, it’s very hard for me to hear an injury described and not get a full-body shudder as I imagine it happening to me—and some of these injuries are horrible. But a lot of them are also incredibly stupid, and by the end I was mostly shuddering with laughter. Like, 75% laughter, 25% horror.

Read the Twitter confessions below and know you will never feel like your index fingers are safe ever again. 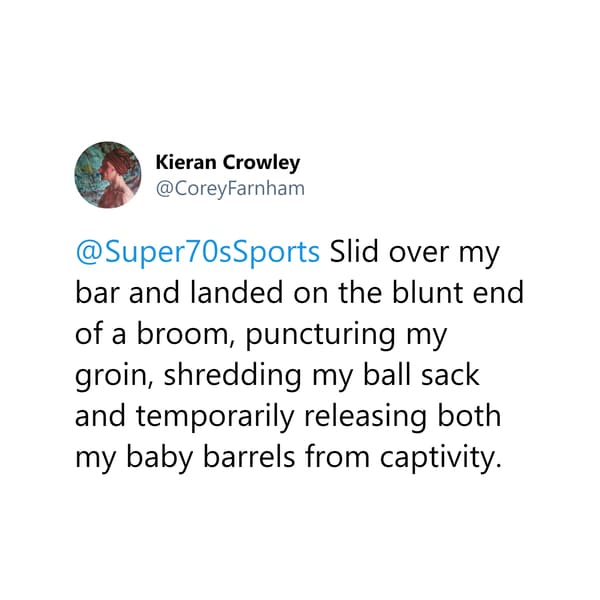 Sir, that is not a freak injury. I’m sorry, but that may fall into the “expected consequences” category. I hope it healed well.

I dislocated my jaw yawning. Twice.

Torn tendon in middle finger putting a fitted sheet on the mattress. 3 corners were on. Pushing the 4th corner on, the elastic in the sheet snapped back, bending finger all the way back. Told friends it was from playing basketball.
— tim rader (@tjco1006)

Threw out my lower back reaching for a French Fry on my dashboard of my car.

My wallet slipped out of my pocket while I was in a portapotty. I went to catch it & knocked it around the rim onto the floor at my feet. I was purely reacting & bent over to pick it up – banging my head on the rim of the urinal. I exited the thing w/ a 2″ gash on my forehead.

If that had been a Pudding Cup you’d be dead right now.

Just home from seeing Mom in the hospital. I’m 9. Bro & I start a dodge game instead of getting ready for bed.
L-shaped bunks. He’s on the top, I’m on the floor. Cracked my head open on the bedpost ducking from a stuffed dog. Back to the 🏥, 12 stitches, next day was picture day.

Took some digging, but… pic.twitter.com/J6mjIFBamK

Got a concussion while playing kick ball, while trying to dodge a throw as I was approaching 2nd base. Problem was that 2nd base was a tree and I ran into because I was looking back at my friend and not the tree. 🤦

Crawled under a desk to plug a computer back in that a student knocked loose with his feet. When i put my hand on the box, i got a huge shock (it was shorted from the salt n slush) and the pain made me jump up. But i was under a desk. Minor concussion, and a bad bad word in class pic.twitter.com/M9XsMLlFYo 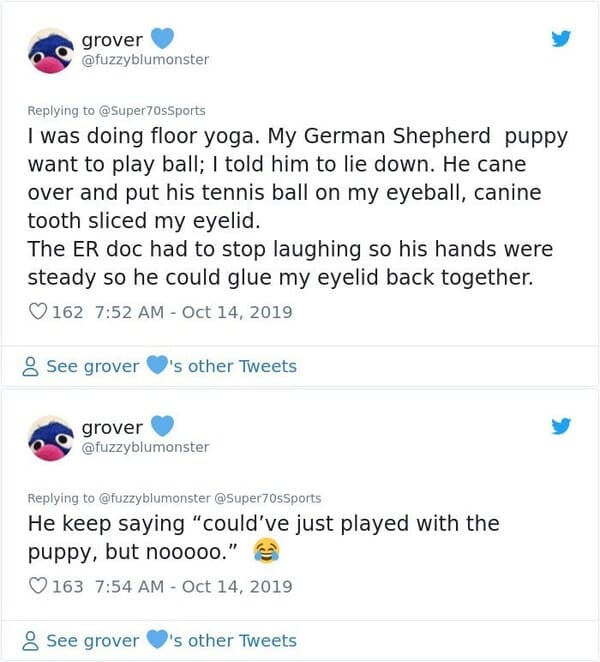 In Atlantic Terminal subway station was helping a woman down the stairs with her kid in a stroller. Thought I was on a platform, turned and fell down the rest of the stairs. Broke both legs, but I did put the stroller down first. 😜