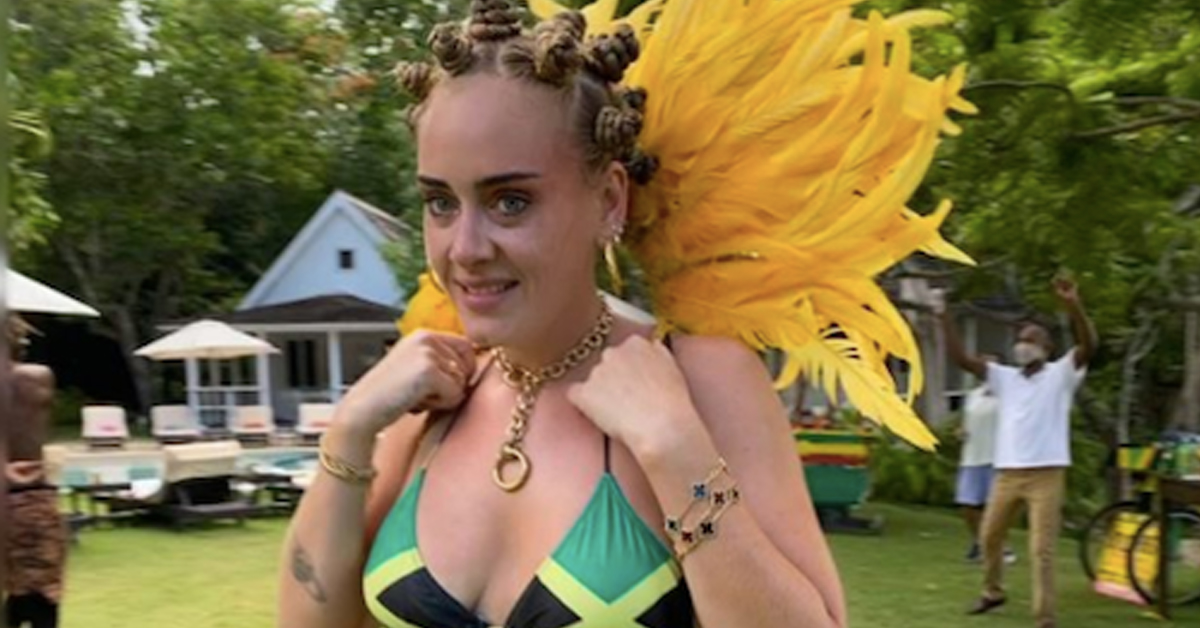 To be honest, I’m not sure anyone had “Adele gets canceled” on their 2020 Bingo card…

But then again, this is 2020 and I guess that means anything can and will happen.

Adele took to Instagram again over the weekend, and not in the fun way that she’s been posing lately…

And the support she shared for Beyonce’s “Black Is King…”

Now, there are a lot of celebrities who are accused of cultural appropriation, to the point where they’re pretty much reviled amongst certain communities (coughTheKardashianscough), but this Adele controversy came so out of left field that people seem more confused and sad than really enraged.

To celebrate Notting Hill Carnival, an event celebrating the Caribbean diaspora of the area, Adele posted a picture of herself in a Jamaican flag bikini and wearing Bantu knots, a traditional Jamaican hairstyle. Maybe it shouldn’t need to be said, but just in case, Bantu knots were created by and worn by Black women.

A white woman just popping them on her head is gonna cause some issues. You gotta see that coming. 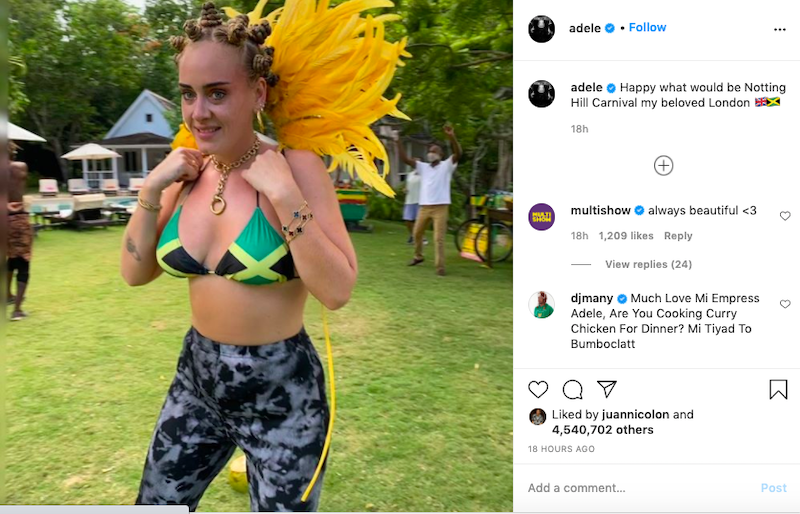 Considering the frequent societal discussion of what cultural appropriation means and how it harms the cultures having their styles and ideas ripped off by white people, it’s pretty shocking that Adele would dress like this. Even more shocking that she would post it on main. She even looks uncomfortable! While there was definitely anger expressed online, a lot of people were just completely baffled by this choice:

There were so many fucking steps that happened before that Adele photo made it public. An idea that took SEVERAL people’s approval. A hairstylist who was like “you sure?” A publicist who said “go for it.”

I need to lie down

she needs to fire her team pic.twitter.com/6JF1JXI3jg

Absolutely not a fucking soul.

adele’s friends r fake as fuck for letting this one hit the main 💔 pic.twitter.com/GknaaL7dZZ

Even more people were sure it was Katy Perry, who has quite a history of cultural appropriation herself, so the look fits:

Is this Adele or Katy Perry?! Please tell me it’s not Adele. pic.twitter.com/p8suxFGqnn

NOT YALL HAVING KATY PERRY TRENDING BECAUSE OF ADELE’S IG POST💀💀💀💀 pic.twitter.com/KNbM4kaID1

There definitely were people who were genuinely pissed off though, and the conversation began to grow as people argued about what it means to appropriate culture, whether it’s for anyone but Jamaicans to say if this is okay, if the conversations we have about the issue in the U.S. is different from in the U.K. and on and on:

Lmao @ the Caribbean’s in here saying “it’s for Carnival y’all shouldn’t be offended” when nobody is bothered by her outfit, it’s the Bantu Knots and people have that right. https://t.co/bTu4pgKGav

Americans: Adele was really out of line.

Literally nobody took that adele sht to heart 😭😭 we were all posting memes and laughing. Y’all just hate black Americans

Wearing Jamaican flag and bantu knots to a costume party ❌

certain “Black hairstyles” are PROTECTIVE HAIRSTYLES, not a trend/aesthetic to make you look more ethnic. what the hell are you tryna protect karen? pic.twitter.com/9SkIJpyQkG

Twice this weekend I have seen people do backflips to defend white women in Bantu Knots. If you spent the whole summer posting #blacklivesmatter and don’t see the problem here, you were lying the whole time.

Cracking jokes about Adele isn’t “cancel culture” mainly bc it doesn’t exist. Adele’s career will be fine. She’s very wealthy, talented & smart enough to do the work to educate herself if she wants to. It’s not the job of marginalized people to beg folks to respect their culture

Adele wore the Bantu knots to appreciate the culture. She isn’t getting PAID in anyway-like kardashians. She has never been caught with them otherwise. #Adele #adeleisoverparty pic.twitter.com/ExdN7ZL8N5

Adele clearly didn’t know what she was going to set off when she posted that picture. The fact that she even did makes me think she never looks at social media at all and probably has a team who manages all her accounts and then reports back. I bet they told her it was a hit!