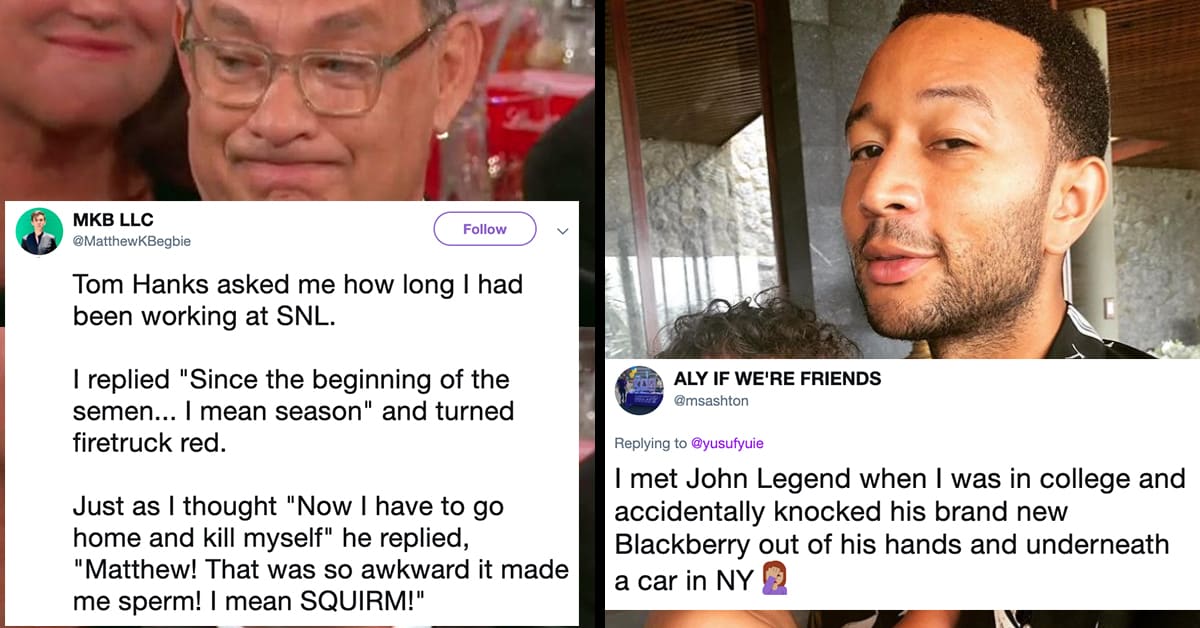 At some point in your life, you may meet a celebrity. When you do, you may lose your mind. You may not recognize them. You may end up smashing their Blackberry. I know all those things can happen because of this Twitter game inspired by user @yusufyuie, who says in their bio that they’re an events marketer and manager.

They wrote in a tweet that they have a lot of awkward celebrity interactions under their belt which makes sense for someone in events. But they want to know everyone else’s.

“What’s ya most awkward or interesting celebrity interaction you have had?” they inquired.

What’s ya most awkward or interesting celebrity interaction you have had? Lol

I have so many

The responses are pretty mind-blowing. While a few of the answers are sweet and make the celebrities and people involved look good, a bunch of them are DEFINITELY NOT. They’re the kinds of stories that will haunt you forever and then flash in your mind on your death bed, causing you to cringe one last time. At least they can be used for a brief moment of Twitter clout. Scroll below for a lot of secondhand embarrassment and a couple of “aw” moments to sweeten it all.

2004, I was at R. Kelly’s “He saved me” video shoot & Jayz was there w/Tyrese. I was freakin out cuz Jayz was gettin ready to walk past me, I was tryna think of somethin to say. I told him I liked his baby blue velour suit who’s it by? He laughed & said “ROCCAWEAR”..DUH!
‍♀️

At an early release party for Black Panther. I was the 4th person to greet Lupita and tell her how much I appreciate her and how amazing she is. She didn’t say anything back. After posing for a pic, she rolled her eyes and then I overheard her complaining about fans.

My uncle met nick cannon and called my mama phone so he could talk to me but when my mama tried to give me the phone and told me who it was I said (out loud) “why would I wanna talk to nick cannon I do not like nick cannon!” And he heard me lmfaoo

they were mad low & halle had dark glasses on & nobody had really even noticed them in the store until lil bro gon blurt out “AYE LADY I SEEN YOU IN SWORDFISH!”

rachel mcadams and I were in line at sprouts and as she was leaving the checkstand I tried to say “hey we have the same sandwich” and “have a good day” but fucked up and said, without saying anything else at all before or after, “have a good sandwich” https://t.co/CTGuepXejZ

Met Susan Boyle in a random café in buncrana one sunday having soup with a priest, nun and another woman. Got a photo with her and she said we look like twins when she was young. The owners didn’t know who she was and then put our photos in the journal. With me still in them. https://t.co/vVHEOXukE5 pic.twitter.com/H5fpA2JcHY

A few years ago there was a period of about 2 months where I randomly ran into Whoopi Goldberg 3 different times in various parts of NYC.

Short person story: went to see a show & right before it starts a super tall guy sits down in front of my mom. She starts making snarky comments about how of course a tall guy sits in front of her & he apologizes politely. We’re all dying because she had no idea who Bill Nye is.

Tom Hanks asked me how long I had been working at SNL.

I replied “Since the beginning of the semen… I mean season” and turned firetruck red.

Just as I thought “Now I have to go home and kill myself” he replied, “Matthew! That was so awkward it made me sperm! I mean SQUIRM!” https://t.co/7wLMG9m6RJ