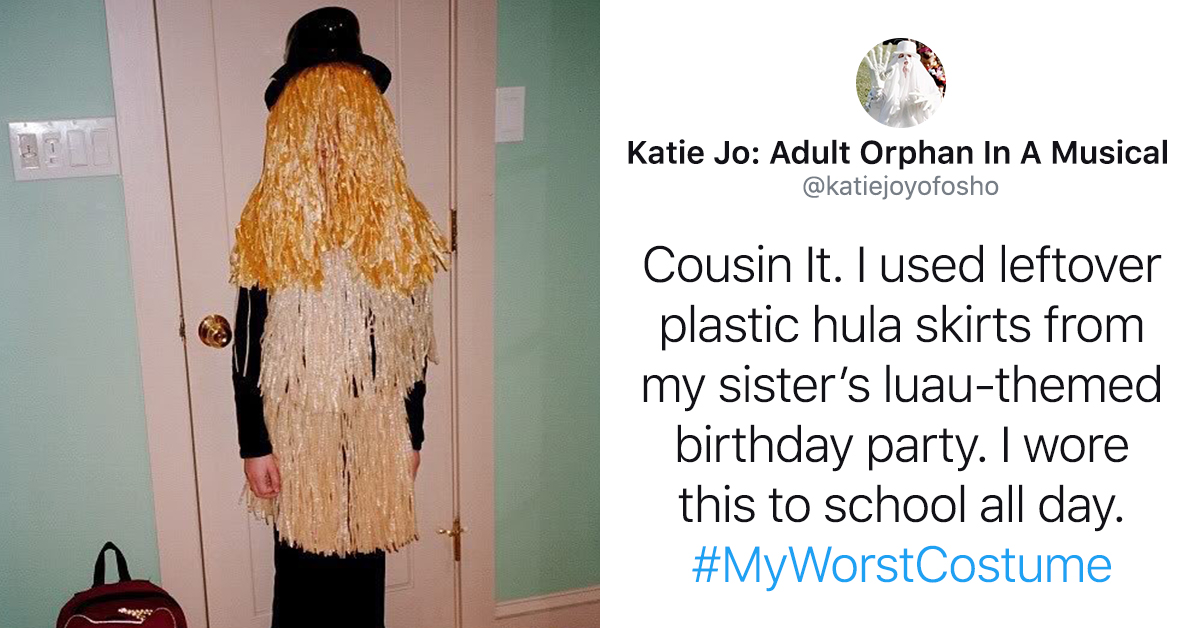 Halloween is just around the corner, and you know what that means. Pretty soon, your social media feeds will be clogged with adorable pics of dressed-up kiddos, even cuter pet ensembles, so-called “sexy” costumes that are just plain wrong and even a few punny costumes for the more irreverent partiers among us. And let’s not forget the annual parade of seriously offensive costume choices that always miss the mark.

Is this costume a crime? https://t.co/Z3bn5UozF6

Despite our best intentions, everyone has a costume fail (or two!) they’d rather forget—but not if Jimmy Fallon has anything to say about it.

If you’re a fan of late-night TV, you’re probably familiar with Fallon’s recurring “Hashtags” segment. Here’s how it works: The Tonight Show host asks his Twitter followers to share their stories related to a particular hashtag. Fallon then reads some of the funniest responses on his show, which airs weeknights at 11:35 p.m. Eastern on NBC.

It’s Hashtags time! Describe your biggest Halloween costume fail and tag it with #MyWorstCostume. Could be on the show!

Here are 24 of the funniest worst Halloween costumes Twitter shared with Fallon:

When I was in 4th grade, I wore this to a kids Halloween party. One girl cried so much that my parents put a plastic bag over his head. #MyWorstCostume pic.twitter.com/NZpeHCpYMe

#MyWorstCostume Number 3: Cousin It. I used leftover plastic hula skirts from my sister’s luau themed birthday party. I wore this to school all day. pic.twitter.com/aptXheQbp8

My mom convinced my brother and I to dress up as Sarah Palin and John McCain when we were in elementary school. #MyWorstCostume pic.twitter.com/93XPIEcB6x

I was supposed to be a Roy Lichtenstein painting, but everyone thought I was Ebola #MyWorstCostume pic.twitter.com/hJt1ZznR8Q

I couldn’t think of anything to go as, so I went to the party in just my boxer shorts. The host looked puzzled and asked what I was supposed to be. I told her I was “premature ejaculation”. She looked even more puzzled so I said “I’ve just come in my shorts”. #MyWorstCostume

My freshman year of college I saw an ad for a costume contest on campus
I didn't know until I arrived that it was a Japanese Anime themed contest, and I showed up dressed as a ceiling fan. #MyWorstCostume pic.twitter.com/WYYCfOj78f

#MyWorstCostume I’ll still never be as cool as I was in 4th grade when I dressed up like a table for Halloween. This was my both my lowest point and my peak in life lmao pic.twitter.com/RwBJghTMbf

1987 – Me and Mom on My first Halloween…. #traumatizing #myworstcostume pic.twitter.com/Cd1Sl3WzqP

When we were little, my dad made all of our costumes to enter contests. 1 yr I got to be matchbox (every kids’ dream).Well while standing in the driveway the wind blew…I laid in the driveway crying as I blew over and couldn’t get back up. #MyWorstCostume #blewawaythecompetiton pic.twitter.com/WTlA4aia6m

Oh @jimmyfallon do I have some costumes for you… #MyWorstCostume number 1 please enjoy nightmare ghost pic.twitter.com/guQlvCwdZC

My friend thought it would be a good idea to dress up as a ghost. She looks like a bottle of WhiteOut. #MyWorstCostume @jimmyfallon @FallonTonight pic.twitter.com/n8THHeSfN9