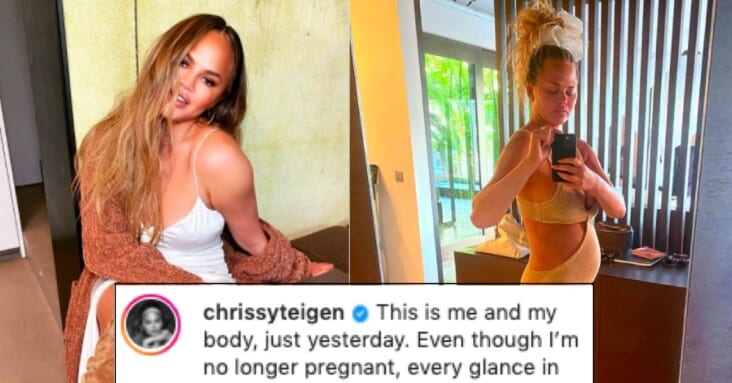 In late September, Chrissy Teigen announced that she and husband John Legend had lost their baby, who they named Jack. Teigen posted images of herself in the hospital as she realized that her pregnancy was ending in which she can be seen weeping in her hospital bed.

The images set off a controversy about how public displays of grief should be. Some felt Teigen was oversharing, but many more supported her decision to be open about what she was going through.

There is very little cultural discussion about miscarriage, and Teigen’s honesty made many people feel like they weren’t so alone in that specific kind of grief.

A month later, Teigen wrote a long letter to her fans thanking them for their support. She also responded to the criticism, saying she didn’t care at all what anyone thought about her choice to share her loss.

Since then, Teigen has given regular updates about how she is recovering and healing. Even though Jack didn’t come to term, the effects of pregnancy were still present in her body. And, of course, there was the emotional aspect of recovery.

Now, Teigen has shared a picture of herself in a jumpsuit that shows how she still has a bump on her stomach that hasn’t gone down.

“This is me and my body, just yesterday,” Teigen wrote in the caption. “Even though I’m no longer pregnant, every glance in the mirror reminds me of what could have been. And I have no idea why i still have this bump, honestly. It’s frustrating. But I’m proud of where this entire journey took my body and mind in other ways. I love being pregnant, so so much, and I’m sad I never will be again.

“But I am lucky to have two amazing little ones who are transforming into big little people more and more every single day,” she concluded. “Anyhoo. Love u guys.”

It’s a beautiful sentiment about appreciating what has been lost and what is still here to appreciate.