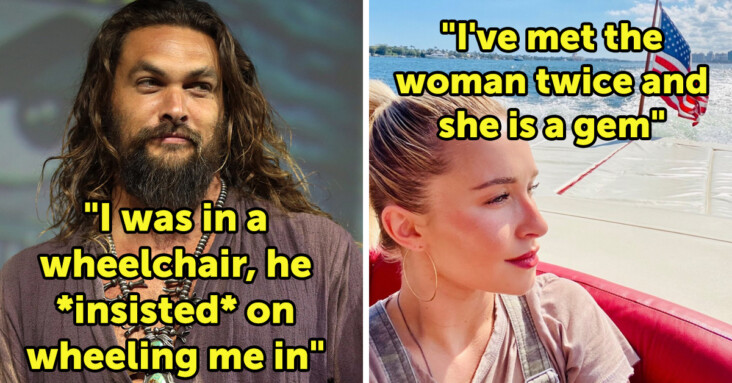 This question over on r/askreddit warmed my heart! Thanks to u/dontwrryboutme, the Reddit community gathered and sat around talking about the answer to the question posed:

“What celebrity do you think is genuinely a good person and is not faking for press?”

Let’s take a look at some of the best answers, squeeing with glee all the way!

David Tennant. He seems like a really lovely guy and someone who gets along with everyone he encounters.

Steve Carell is an awesome dude. He owns a general store in MA where he is from, and will work the register from time to time just to interact with the people.

I met him once years ago at Dragon Con. I was wearing a Goonies T shirt and went through the line just to say hi. We spoke for a few minutes, and then he asked what he was autographing for me. I told him that was ok, i didn’t have the money but just really wanted to thank him for so many good childhood memories.

He picked up his Sharpie and looked over at his handler or whoever she was, and she shook her head no. Then he grinned and told me to lean over, and he wrote “GNSD” on the sleeve of my shirt. Said it wasn’t an autograph, so it didn’t count. He’s really excited and asks me if I know what it means. I’m stunned and can’t say anything, so he bursts out with “Goonies never say die!” I stuttered and thanked him, then promptly walked to the bathroom and started crying at how nice he was and that I got to meet him.

Very proactive in Parkinson’s awareness (obviously). Gets in touch will people personally who have it. Called a close family friend who suffers badly but also does some pretty amazing things (hike much of the App Trail, deep woods fishing trips, he works out daily, etc.).

Michael J. Fox went out of his way to call our friend. Talk to him (a few times IIRC). Just like normal folks, no agenda. Just two people fighting a common enemy. He said Mike was pretty cool.

He would, apparently, go to my church on occasion in his later years, since it wasn’t that far from his home. When my family first joined the church (UCC if you wondered), it was years after he had died. We noticed nobody was sitting in one of the pews close to the front, I’d like to say 3 rows away from the front, and sat there. We weren’t shy about being new. Suddenly, a line of people, basically the entire church, comes and lines up to tell us that nobody, absolutely nobody, had sat in the pew since Fred had died, and it was nice to see a family had. Apparently he’d have liked that – and that’s why the minister (a guy who was in his 90’s no less) did his entire sermon on Fred.

Not only is he not faking for press, it seems like he actively avoids press. People who’ve met him say he’s the nicest guy on earth

My mom knew him. I met him a few times as a kid, he loved kids and was the sweetest man to everyone around. If I recall correctly, if he hadn’t gone into acting he wanted to be a child psychologist.

Sandra Bullock. She comes to town frequently and is nothing but nice to everyone! She’s super sweet and definitely isn’t faking it.

Weird Al is very sweet and respectful in person. He was and still is my hero and I think he’s the coolest person on the planet still at 20.

Met him once at an industry event, he was so excited to hear I had bought wine from his winery. Nice dude.

There’s a video of him recognising a red carpet interviewer as an old pupil of his from when he taught PE and it’s so nice!

My partner had a few casual interactions with him a few years ago and said he was super chill. Apparently they talked about Ben & Jerry’s Half-Baked ice cream.

Dude looks like a chode with his frosted tips, but he raised $25 million for restaurant workers in 2020 and he frequently cooks for firefighters who are fighting wildfires in CA.

He’s so unproblematic and doesn’t age at ALL like HOW?

I met him in an elevator at a con while I was in a wheelchair. He *insisted* on wheeling me in, wheeling me back out (even though my floor wasn’t his), and taking a picture with me. He was very sweet and very funny.

I’ve met several people since who have met him, and they all say nothing but great things about the guy.

If his YouTube channel isn’t a genuine window into his life, it’s a very impressive effort at faking it. I’m pretty sure Jack Black started that channel just to connect with his kids, and it slowly warped into a personal vlog that mostly documented how much he appreciates spending time with his family.

The man is a saint.

Hayden Panettiere, I’ve met the woman twice and she is a gem. At my city’s comic expo she wiggled around the rules so some people could see her for free, technically she wasn’t supposed to be at her booth until 2:00, so she’d show up early and I guess she’d justify people seeing her for free with “well, I don’t start until 2:00 🤷🏼‍♀️.” So yeah, she wouldn’t start charging people for autographs and photos until it was actually time to.